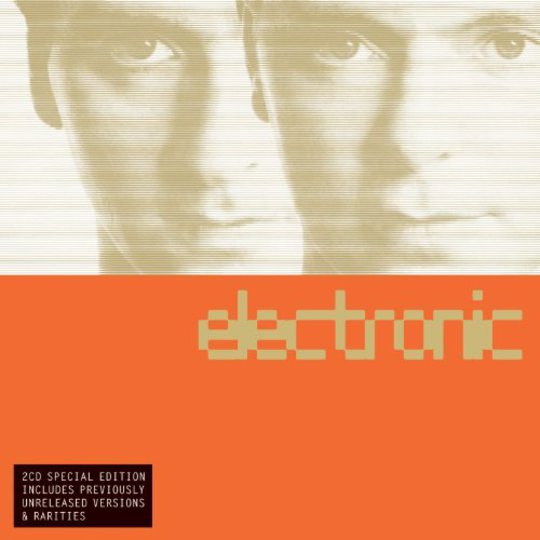 I’ve always held a deep, contempt-filled loathing for never been a big fan of the early Nineties Manchester music scene, its trancey, laid-back feel the product of a marriage between drugs and half-arsed derivativeness. Therefore at first glance no, I’m not the person to review an alternative dance record from 1991 written and produced Bernard Sumner and Johnny Marr and released on Factory Records.

To dismiss Electronic’s self-titled début as another Es-and-whizz-fuelled Madchester dance record is reductive though. The supergroup’s members earned their stellar reputations by being amongst the first to bleed from post punk into new wave (Sumner) and into pop-punk (Marr). Furthermore, Pet Shop Boys Neil Tennant and Chris Lowe appear here, albeit sporadically, and in 1995 the group would go on to work with members of Krautrock crossover pioneers Kraftwerk. Anyone who doesn’t like The Pet Shop Boys is an idiot, so there’s something there.

As a consequence, Electronic stands up well next to other albums of its era, including The Stone Roses (which I understand some people like). The tracks with Lowe on keyboards are gorgeous as you would well expect, Tennant is a fantastic singer and Marr was still a sidekick rather than the abomination of a frontman he devolved into on his new solo album The Messenger. Sumner too was a creative force, this album bisecting ‘True Faith’ and ’World in Motion’ ‘Regret’. Supergroups rarely work well, but like a stopped clock the creative forces here were always going to churn out something brilliant, and did with the likes of ‘Getting Away With It’ and ‘The Patience of a Saint’.

Unsurprisingly though, the album has aged poorly. Sumner’s keyboards sounded dated by 1997 and at one point with good headphones you can hear him shouting “No soup for you!” whilst Marr plays an irritated synthesised slap bass. ‘Get The Message’ was heady and euphoric back in 1991 but now sounds laddish and faintly pathetic, the musical equivalent of Loaded magazine. Obviously it’d be churlish to criticise the band for writing music in the early Nineties that wouldn’t sound so good in 2013, but then why reissue it if not to cash in on The Roses’ reunion?

So as to neatly sidestep accusations of being a lazily tossed-off cash cow attempting to fool the consumer into paying for the same product twice, the reissue comes packaged with a second CD of remixes and alternative edits, not just of music from Electronic but also later albums Raise the Pressure and Twisted Tenderness.

Some of these work; the guitar/vocal mix of the third album’s title track sees Barney do a passable Morrissey impression and Marr’s guitar given greater prominence, so we can all pretend The Smiths stayed together a bit longer. As with Disc One, though, the majority - including some of the 2013 edits - are vague, passable dance tracks that you’re only aware are on in the background because of the gnawing sensation that daylight saving went mental and set the clocks back 20 years.