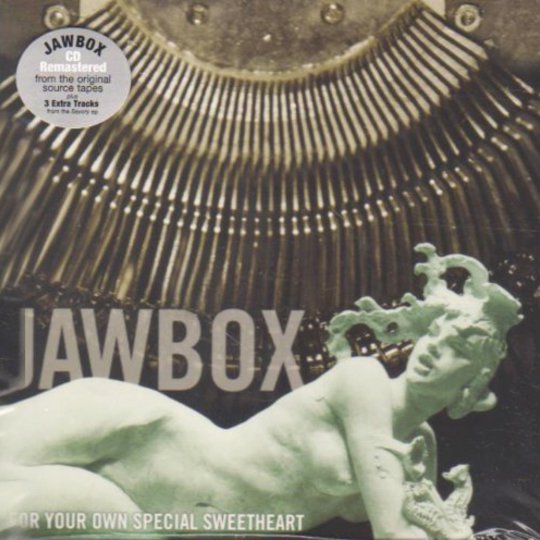 Do you sometimes feel history to be a little cruel? Jawbox might. They were a cautionary tale to be told from indie rock parents to indie rock kids. "Don't sign to a major", they would whisper in their young offspring "They'll change your sound". So it was with Jawbox, who signed to Atlantic for their third album. Whether the major changed the band is a moot point, especially as that's 16 years in the past. What can be said, and what has been said by the band, is the production on For Your Own Special Sweetheart is lacking. Specifically, it was very much of its time, sticking firmly to a formula, with Kim Coletta's scooped bass only just loud enough to let you know it was there, democratically buried between a twin guitar attack. That production marred Sweetheart.., and that has rankled them enough to seek someone to repair it. But who could do such a job?

Step forward Bob Weston, Shellac bassist and all round production wizard. Recognizing that the beating heart of the album lay in the fluent and insistent basslines of Coletta, he's rightfully pushed her forward in front of the guitars. His remastering has led to a complete re-presentation of their sound, with not just the bass highlighted, but the separation of all the instruments in the mix improved drastically. It sounds like an album that was recorded last week, instead of one made in 1993. It is truly an incredible achievement, and one that shows just how far ahead of the curve Jawbox were. For Your Own Special Sweetheart has plenty of cues to Rival Schools and Jets to Brazil, but came out around the time their predecessors Quicksand and Jawbreaker were still going concerns.

The album is close to perfect, and has potentially the strongest opening sequence of any straight-ahead emo rock album I've heard. 'FF=66' is propelled by rhythm section, Zachary Barocas' drumming brutal and technically adept, Colette's bass delivering well timed blasts to emphasise key moments. 'Motorist' is another highpoint among high points with the harmonised refrain of "Turn your back, just travel past, nothing is better than getting out fast" being delivered as the band power through one the chunkiest riffs on the other side of the year 2000.

If there was one quibble to be made on this latest version of the album, it would be that the three bonus tracks, while being better than passable, don't quite fit into the structure, and make the whole experience feel a little bit draining. The album proper comes in at around 40 minutes, and the additional nine and a half don't follow on from that as easily as they should. But that's a modern concession to the expectation of how we expect a re-issue to be. It's a come on to the fans who already own it, but a tiny slight to those who haven't. That's the only minor gripe to be found on what is an amazingly fresh sounding take on a benchmark, and utterly essential release. Seek it out.