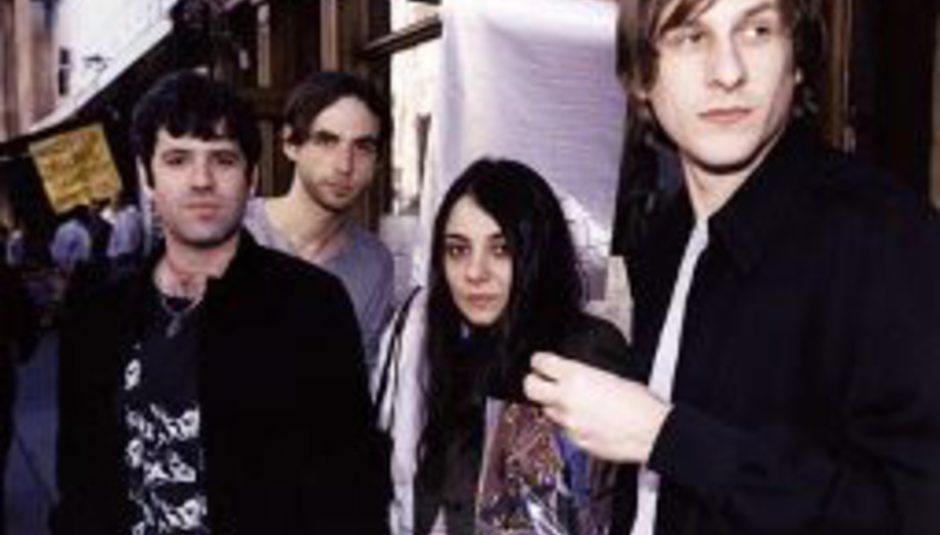 When you’re dealing with a band whose music evolves from hours of improvisation, intuitively blending genres with no regard for boundaries, and sampling each others’ voices and instruments to feed back into the sound... it almost makes sense to dissolve the interview/gig review/album review format. When the band in question also regard their recent records as a celebration of the life of a former member, and speak of the music as "offer[ing] sanctuary... but also making us mad at the same time," suddenly the biographical angle seems to be a little more than a convenient hook (since there aren’t many lyrics to hang a story on).

As you probably know, Gang Gang Dance released the critically acclaimed God’s Money in 2005. Like an ambient record played at the wrong speed, it’s detailed and varied (if you listen closely) but the immediate impression is that it’s an undulating, writhing, rainbow-snake of a thing from start to finish, with colours, sounds and beats bleeding together. You can’t go wrong with David Toop’s "Ocean of Sound" metaphor, so I’ll use that as shorthand for now, and come back to the aural psilocybin stuff later, when I’m talking about the liveshow and what it did to my neocortex, Third Eye, feet, knees, hips, and pelvis. Briefly, the new album, St Dymphna (2008) has more distinct tracks – it’s not quite right to say it’s more song-based, although there are some strong singles – and yet it carries over one of the key principals that makes Gang Gang Dance so important.

The totality of what made God’s Money (2005) one of the most fluid and engaging electronic/dance records since Brian Eno and David Byrne's My Life in the Bush with Ghosts (1985) is – of course – complex and subjective. Nonetheless, there’s a lack of edges around particular sounds you’d associate with a genre, cultural tradition, or specific recording – any rips in the collage – that tell you 'this has been pasted in' without any purpose to the juxtaposition. For Eno & Byrne, sonic collage was a meaningful response to globalization, and for Public Enemy, a device to suggest subversion of hegemonic cultures (and it still is) but it’s just as liable to become the default setting as any other avant-garde strategy. Gang Gang Dance just blend what they like, whether it’s traditional African music, urban music, or European pop. On the new album, 'Princes' (feat. Tynchy Stryder) doesn’t bracket the genre introduced to the mix by having a "rap-section" (like REM & KRS-One), it’s just a grime track, plain and simple.

"One of the other interviewers mentioned a Kylie song I’d never heard, and I put in a beat from Snoop Dogg, but you know – I like Britney. You hear things on the radio, and it comes out in our sound, but it becomes something else." (Liz)

The best illustration of this, it occurs to me now, is Josh tapping a rhythm on his can to signal the start of the interview; listening back, I realize there’s a police-siren in the distance and a whoosh of traffic.

On first listen, and like a few other people in the audience, I hear My Bloody Valentine in the extensive use of pitch-bending on 'Vacuum' and tell I them it seemed like a sly aside, like saying: "we don’t need 17 engineers to make new sounds". Arguably, there is no collage – only, internalization, and then intuitive playing. For the most part, GGD only sample themselves. Back in the early 1990s, when sample-heavy records were new and exciting, the likes of The Orb were hailed as the saviours of music, for slotting massive samples into rather uninspired rhythmic frameworks, mostly using the same default 4/4 rock beat that made any pretence to superiority over live music somewhat hypocritical. Then samples became too expensive for sonic collage, and I lost interest, right through successive vogue for mimicking gamelan this summer, and computer-game music next autumn. Now though, musicianship seems to be back:

"I think a lot about that – I often wonder why people are using samples. The medium became a standard thing. It’s a bummer to me. If you can play, though, you can put things in a new context. We’re not, like, studying things, but bits and pieces just make it through. I studied a little bit of guitar styles, but I don’t really play guitar... there are a lot of people who really study music, and decide what they want to sound like. There are plenty of bands in England who have the same disco beat, and it’s fine for them but [laughs bemusedly] we don’t think about music that way." (Josh)

Until Gang Gang Dance came along, I’d mainly thought of the sampler as a medium articulated to a culture of plurality and inclusion, but – like every medium – the 'extension' of human possibilities in one direction has as its corollary an amputation (or, in some theories, castration), elsewhere. However time-stretched and pitch-shifted, the use of samples limits you to simulating new collisions of sound and genre, rather than enacting that collision. According to Josh, "the seamlessness of [our] music arises from the way we started playing", and the rehearsals can involve playing continuously for four hours. This recovery of the immediacy of performance, and the emphasis on responding to the other band-members, surrendering to a collective consciousness, led me to wonder how significant the title of the new record might be:

DIS: St Dymphna refers to the patron saint of mental illness, possession, etc., but how much do those themes inform the record? Is spirit possession, and are related ideas like channelling, largely metaphorical for you, or do they describe the experience onstage pretty accurately?

Liz: These are mostly references to Nathan [Maddox] who was in our band [but struck by lightning, some years back], so the title refers to what happened to her [St Dymphna, rather than more general ideas of what she might represent]. There are a variety of metaphors, and it describes the state of the band right now, but it’s a tangled web.

Josh: The music offers sanctuary to us, and it also makes us mad at the same time… but ultimately, it’s a positive thing.

Liz: It’s a way to celebrate… and to pay homage [to Nathan], as well as being about the way we work.

Josh: [The title of] God’s Money is also a reference to [Nathan]. He was so generous with mone... well, money was one thing he was generous with, but he also gave food, and anything he had, he would share it. He’d say "it’s not my money, it’s God’s money."

Brian: ...and, when we were finished with that record, we started finding money all over the place [Liz laughs]. No, really. All over the place. One of them was on the rooftop, where Nathan was struck by lightning. We’re talking stacks of bills, man.

DIS: There goes my next question! Having studied some ethnomusicology, the title made me think of the notion that – in tribal societies – the only real property is a repertoire of songs, and anyone who accumulates assets (as in: material capital), rather than sharing it with the society, is a witch. Maybe he intuitively shared that ethos?

Liz: Well, Nathan was about “no possessions”, and about compassion, and faith, and giving. [Using the phrase] God’s Money was the most real way of expressing that idea. Nathan was [something of] a mistake: he never had a place to live, he was always staying with people, but he’d fill their fridges with food.

Josh: Look what happens when you horde money... [This interview took place the day after "Black Friday", at the end of the week in which the $700bn bail-out was approved, but the markets had yet to stabilize.]

Brian: ...everything crashes, and everyone loses their minds. It doesn’t matter to us, because we don’t have any money!"

Quite. Thinking of odd coincidences, I’d been watching Wall Street only a few days before, largely out of a sense of indignation (and for some schadenfreude), and the soundtrack was My Life in the Bush with Ghosts – the very same record I’d been listening to, in the lead-up this interview. It seems interesting that there’s a dialectical relationship between the prevalence of cultural hybridity in music, and globalization as an economic phenomenon. Economic (and imperial) expansion enable greater awareness of musical forms, and these become emblematic of refusal of the values driving that expansion. There’s a rational explanation, but it’s complex enough to feel like magic.

So, what of Gang Gang Dance as a live band, and what of the record? On first listen, St Dymphna is immediately engaging, albeit that the tracks sounds shuffled, like a home-made mix-tape, and the arrangements are spacious – they haven’t gone for sensory overload, so as to develop their sound, but refined the details. On second listen, on headphones, walking through Camden, I almost leap out of my skin, as several minutes elapse between weird new sounds springing from different directions. By the third listen, cut together with God’s Money, it’s clear that most of the tracks are just as strong, and yet the experience keeps changing.

On the night of the gig, I’m exhausted, standing at the bar with a camera, bag full of books, and way-too-hot jacket; as the band ease in slowly, finding their groove, I don’t expect to be grabbed. Within five minutes, the music’s everything. I mean, everything in my sensorium, and everything music can evoke. Swarms of pyramids and polyhedra swooping back and forth, 1000-foot waterfalls of colour – the whole psychedelic enchilada. It’s sensual, seductive, and – a rare feat this – it’s as danceable as it’s listenable.