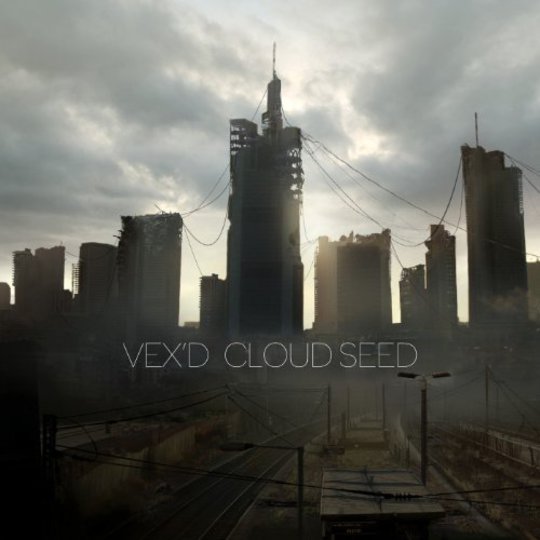 While dubstep isn't short of innovators, it isn't short of propagators either. The sound you hear at nights across the country now feels almost unrecognisable when placed next to the minimal, barebones production of the early-to-mid Noughties. Undoubtedly the foundations are the same, but the aesthetic and end product differ massively. It was always intended to be an experimental, forward-thinking genre, so it's unsurprising that the contemporary producers getting the most attention from critics are looking to funky, techno, house and hip hop for a new creative framework, rather than vainly churning up the past. Cloud Seed is the long lost second album from London duo Vex'd, produced in 2006 and 2007. Untouched since they were (sort of) abandoned for other projects, these tracks are like a snapshot of the textured, industrial dubstep niche Vex'd occupied so successfully and the innovative way they made it their own.

'Take Time Off' is probably the most immediately accessible moment on this release, so it stands to reason that it should introduce the album. Featuring vocals from Warrior Queen, it is a Planet Mu favourite that first appeared on the compilation Plan µ and is probably the most dancefloor-friendly offering here. In a similar vein is 'Heart Space' featuring Anneka, who you might recognise from a comparable guest appearance on Ital Tek's atmospheric 'Weave'. Here her contribution hinges on the same lilting melodic structures but is given a sinister edge by its doom-laden backdrop, scattered with churning mechanics and alien blips.

Elsewhere, tracks like 'Out of the Hills' achieve the kind of monolithic bassweight that 2005's Degenerate has become famed for, stripping the signature Vex'd grit down to a sliding bassline and a powerhouse drum loop. A hallucinogenic remix of Plaid's 'Bar Kimura' by one half of the duo is another real treat. It teases out the echoes of a ghostly melody before a crazily deep knee-jerk bass desecrates both channels. Another strong remix appears in a Vex'd adaptation of Distance's 'Fallen'.

Less exciting is 'Disposition' featuring rapper Jest (not be confused with Jehst), who evidently comes from the Wu-Tang school of rhymes but doesn't have the swagger or bravado to carry it off. Similarly, the backing seems like a bit of a cut and paste job since it never really takes off. Fanatics might get excited by the MAH mix of 'Killing Floor', the b-side of the brutally glorious classic 'Bombardment of Saturn', but again it doesn't offer that much and feels much more unfinished than other parts of the album.

As things draw to a close we are hit by two strange halfbreed curiosities that reveal some of the less explicit influences at work behind Vex'd. Slowburner 'Oceans' ticks along on an ambient analog synth pad and hip hop sentiments, probably the closest thing to 'chill out' they ever created and included here for the sake of completeness. Meanwhile, 'Nails' is a terrifying concoction of industrial and black metal, featuring some original manipulation of samples and crazy amounts of distortion.

While this is a collection of essentially unfinished tracks, left on the shelf since 2007 after the duo dissolved and went their separate ways, it rarely feels that way. The flow is maintained nicely by intermittent ambient excursions and classical reinterpretations, and the polished production belies the rough-as-a-band-saw aesthetic Vex'd buried themselves in from day one. What is most surprising is that this album still has the filthy edge it must have had upon conception. As the genre grows exponentially, it needs to be restated that heavy dubstep doesn't have to be predictable and wobbletastic – it can be gut-wrenchingly heavy and provocatively original. Cloud Seed is a good reminder of this fact.