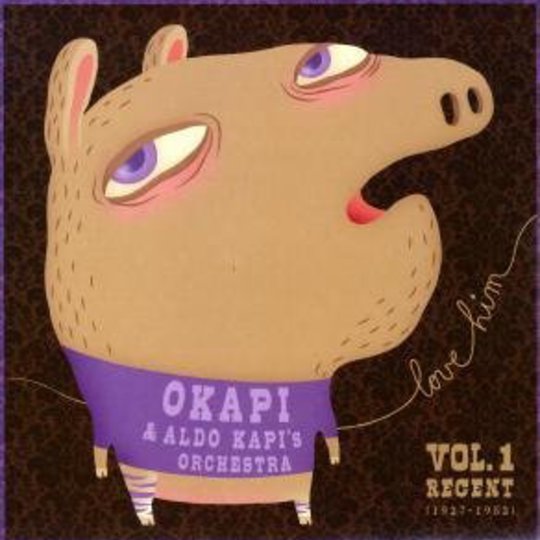 Illegal Art is a great name for a label who release the sort of illegal art that Illegal Art artists make. Initially forged in the late Nineties from links with Negativland, the high priests of this kind of postmodern theory / dick joke duality, the imprint tends to be responsible for the sort of laptop-toting nerdlingers who wish for John Oswald’s Plunderphonics and a Jock Jams compilation to leave sweet love residue inside yer iTunes. It seems fair to assume that the success of Girl Talk’s last two albums finances the rest of the label’s output, at least to some extent. (And while I get that you might find Feed The Animals the most inanely shallow no-talent nugget you ever heard, I reserve the right to find at least a kernel of amusement in someone busting out of that stiffly academic cut-up movement to end up playing in front of fraternities who probably wouldn’t care less if he was an iPod.) Output by dudes like Okapi, who is an Italian with the given name of Fillipo Paolini.

Okapi, certainly on this 15-track release, ticks several of the Illegal Art boxes. His list of previous collaborations zone in on that strain of modern musician who is serious and fastidious about his work, but masks it with a smile and a lengthy songtitle: Mike Patton, Damo Suzuki and countrymen Zu, for example. Love Him, as presented here, is a compilation of the best of two CDs, Love Him volumes 1 and 2 – nestled amidst a near-impenetrably extensive discography. Best of all, the music here is based around a concept which sounds high-minded but, with cursory investigation, appears to have sprung from Paolini’s imagination. Aldo Kapi, the story goes, was a composer from Kyrgyzstan in the first half of the twentieth century; initial acclaim gave way to underappreciation of his pioneering compositional skills, and his mental instability led to his death in 1952. Given that there isn’t a single bit of info about him out there that doesn’t have this recording associated with it, I think we can give this one a wan smile, but fair play.

Genuine composers or otherwise, one assumes this to be made wholly from samples, and they come from a sprawling palette. Love Him is classical, jazz, IDM and weirdo drone, often in the course of one song. The album’s first ‘proper’ track, ‘Bud Dub’, is puppy-keen to win your affection: slivers of strings, a curtailed snatch of vocal here and there, a bassline that achieves regularity. Very approachable and, it seemed to me, very 2001 – your mileage will probably vary but in dragging Mouse On Mars, Burnt Friedman and Wevie Stonder up from my flooded memory chamber, chunks of this album definitely hark back to a specific era. This sort of thing – likewise the glitchy Mille Plateaux posse, and the stuff Kid606 was unleashing on Tigerbeat6 – was always likely to be ephemeral, but it still feels excitable and open to technologically-fuelled ideas. Hard to fully hate on that.

At times – to wit, ‘Everything Must Change Part 1’ – it’s almost big beat in its ribald jokiness. Not an idle swipe, as lots of those heads were cribbing from Steinski and Jean Jacques Perrey in their own way, too. It does, however, indicate that after the... frivolity is peeled away, Okapi sometimes doesn’t have much else in reserve. An occasional tactic is to resort to creeping up behind you and bursting a balloon, in a manner of speaking. The title track, largely ripe with orchestral sweeps, lets what sounds like a sped-up version of the ‘Get Ur Freak On’ bassline in the door; pistoning hardcore techno crops up on ‘Dislessic Soul’. There are actual “sproi-oi-oing!” noises in ‘Pignottimi D Approsi’, mingled with some sort of Dixieland jazz.

Now, speaking as an overgrown child, I like “sproi-oi-oing!” noises. In isolation, I like most of the noises which feature on this record. The gap between liking the sound of something and engaging with it can sometimes be quite large, however, and this proves to be the case on Love Him.