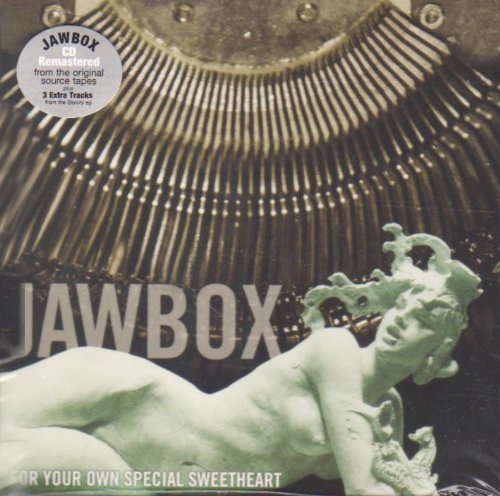 Jawbox - For Your Own Special Sweetheart (reissue)

It sounds like an album that was recorded last week, instead of one made in 1993.»

much heralded reissue of this hugely influential album from 1994. along with the likes of sunny day real estate and jawbreaker at that time, these bands re contextualized the word 'emo' and brought post-hardcore punk a step closer to the mainstream. considered by fans and critics alike to be jawbox at their peak, this definitive re-issue of the long out-of-print 'for your own special sweetheart' (originally released on atlantic records) includes 3 additional tracks taken from the classic 'savoury + 3' ep. jawbox was born circa 1989, clawing their way from the primordial pond of dc's raucous, vibrant, dischord driven underground to claim a seat of honour at the table of what eventually came to be called 'post- hardcore.' the racket raised by the four members - j. robbins, kim coletta, wc 3d barbot, and zach barocas - was suitably loud, occasionally fast, and spirited enough live to move the punkers around the dance floor in something considerably less than a decorous fashion. but by the time the mature band came to record their third full-length, their first for a major label after amicably leaving dischord, they had distanced themselves somewhat from their purely post-punk roots and were more intent on breeding strident wolves clad in a pop song's clothing. 'for your own special sweetheart', whose title was cribbed from the box blurb for a barbie doll, was released by atlantic records right around valentine's day 1994, to cries of both 'genius' and 'sellout' respectively thrilled and
bemused fans. as they toured, praise accumulated. although the foursome lasted 3 years and a final full-length before the inevitable break-up, critics and fans alike still view 'sweetheart' as the band at its peak, with its heavy rhythms, guitardriven noise, and hooky melodies proving the signature to jawbox's sound. but the two-record stint on atlantic proved problematic for keeping the record alive on vinyl and cd; despite the praise, the collection quickly went out of print. further, the band often bemoaned the 'missing mid-range' anaemic-sounding low-end of the final release. a dusting-off was due, and salvation came in the form of dischord and chicago mastering service's bob weston. the former agreed to re-release the record on both cd and vinyl; the latter was the obvious choice for the remaster, given his long history both with the band and with the genre.
description from www.drownedinsound.com