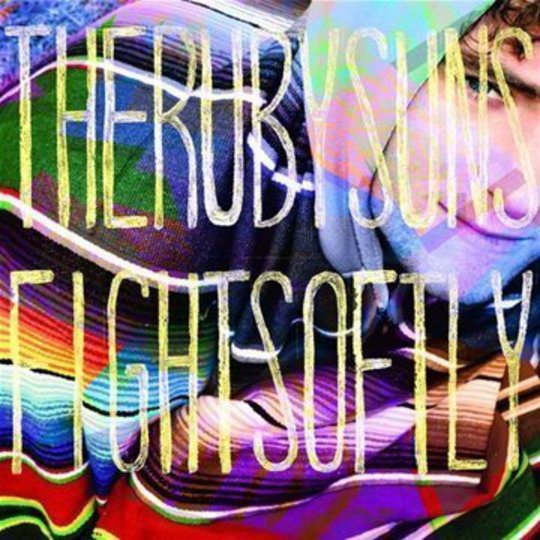 I think of The Ruby Suns and I think of sunshine and good times. I think of how I used to feel slightly in awe as a teenager on the rare occasions when Edinburgh would contrive for me to meet those beautiful, carefree people who used their esoteric musical taste as an affirmation, not a weapon. This is all very well and good for me, but it seems relevant enough to note here because that spirit is at the centre of how The Ruby Suns sound. If all musical endeavour rests somewhere on a spectrum, then TRS are at the very opposite end from Sun O))). So it is that the new Ruby Suns album, Fight Softly, has the airy free spirit exhibited on their two previous outings. Like a watercolour built up from layers of opaque colour stacked on top of one another to create something pastoral and beautiful, there is a lot going on. At times it comes across like a more R&B/electro influenced version of the Flaming Lips' Clouds Taste Metallic. The connection isn’t ever explicit in something as vulgar as a stolen chord progression or vocal signature, it's more in the sense of a band who have created a chaotic, dense record which presents life in a more surreal and beautiful light than most acts ever get close to. Fight Softly isn’t in the same league as Clouds Taste Metallic however, which, let’s face it, is among the very faintest of criticisms, but the fact remains that it is slightly hit and miss in places.

The album opens with the hazy synths and falsetto of ‘Sun Lake Rinsed’, which sets out the stall faithfully for what is to come without being a particular high-point on the record. The African influences of previous Ruby Suns work as present as strongly as ever, but the Sixties psych is largely ditched in favour of a more electronic, synth-driven sound. Things kick-off proper with ‘Mingus & Pike’, which fades a rather large Chemical Bros-esque beats into earshot accompanied by Suns main man Ryan McPhun wheezing “It’s easy, it’s easy” before a head-nodding mix of marimba, synths and agricultural bass meld together around glacial vocals. ‘Sun Lake Rinsed’ is not a bad track, but it feels a little like a false start compared to the way ‘Mingus & Pike’ nails down the ambitious mix of styles Fight Softly seeks to bring together.

‘Cinco’ picks up the baton from ‘Mingus & Pike’, vocally at least, but the beats are pushed into the background to make way for a slicker R&B sound which coaxes out one of the more assured vocal performances from McPhun. The bridge after the second chorus is a gorgeous chunk of soul-flecked techno which would sound right at home on an N.E.R.D record. The Ruby Suns are essentially Ryan McPhun and a revolving cast of support, and while he’s not quite an auteur in the mould of Trent Reznor or Britt Daniel, Fight Softly feels noticeably more like the work of one man than previous albums. The pin-sharp production on the record undoubtedly plays a part in creating this impression; this is very much a sound honed in the studio, but the arrangements too are tight rather than intuitive. So much is crammed into these ten tracks it’s hard to believe they have room for difference of opinion or frisson equal-member status in bands generates.

The centrifugal presence of Ryan McPhun is also the reason for one of the album’s slight weaknesses. McPhun’s vocal is at times too thin to really dominate the mash-up of soul, disco, R&B, electronica and African percussion he variously conjures. Happily though, his gift for splicing a number of genres together which would make lesser beings seem like dilettantes means this thought never resonates too strongly. For every track such as ‘How Kids Fall’ where his vocal struggles to keep up there is always a excellent number like the ‘Brother Sport’-esque ‘Dusty Fruit’ round the corner to save the day. It seems harsh to criticise the power of his vocal when fans of the band will know that the strength of his voice lies in other areas, namely the ability to convey the simple joy of being Ryan McPhun. It is fitting then that Fight Softly closes with the best synthesis of his undoubted charms with the new electronic direction, ‘Olympics on Pot’. The slower build of the track works well, and halfway through it wonderfully spreads its wings in a fantastic moment where McPhun asks “What about your mother, she tried so hard waiting on, the evening so that she could rest” then breaks into a dirty techno groove which feels like the summation of everything the album has been striving for. I love Ryan McPhun.