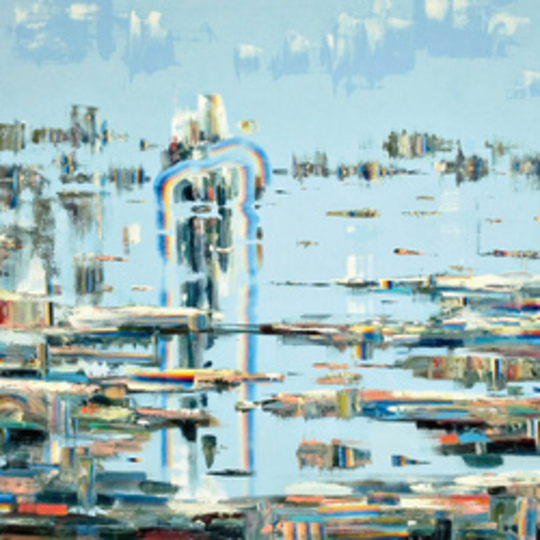 O how you vex me, Dayve Hawke. You vex me because I know you are just one person, yet two of your three alter egos have names in the plural. When talking about you I know I should be all "Memory Tapes is..." but see, that upsets my pedantic semantic circuits so much that if I didn't like you as much as I do I wouldn't like you very much at all.

Memory Tapes is [grrr!] the outcome of Mr. Hawke's decision to abandon by way of combination his formerly distinct musical personas - the more electronic Weird Tapes and the more spacey (and singular) Memory Cassette. Dayve embraces advancements in technology and has been giving the magical internets a huge bear hug by supplying loyalists with free samples of his music via a modest blog. This gratuitous PDA has been going on for a couple of years, but Seek Magic is his very first album and the first release that we actually have to BUY. Perhaps wracked with guilt by this submission to capitalism (nothing wrong with it, we all eventually succumb), he offered us a song off the album shortly after displaying the multitude of links to buy the record on Amazon, iTunes, Rough Trade etc. Said song, 'Green Knight', is saturated with charming despair - "even though I'll never hold you/I can watch the ones who will" - he could be a deranged stalker, but to us he's an unhappy little wallflower. "I want to give you my love," he pleads hopelessly. "I want to call your name" he implores hopefully. "At the sound of my voice you turn away" he sighs finally, and all our hearts collectively shatter. 'Green Knight' makes you keenly aware that there are not enough people in the world using basketball practice in squeaky gym shoes as a legitimate form of percussion. A suitably 21st centuried voulez-vous-esque 'solo' closes the song sadly, as it dances over the meanderings of a relatively more old-school piano.

Beautifully languid opener 'Swimming Field' evokes the pleasant listlessness of a sultry summer evening, complete with vague awareness of a gruffly vocal dog next door. Flat on your back you thump your bed absent-mindedly, keeping time with a Guthrie-inspired melody before it transforms into an energetic little whirlwhind and whisks itself away into the ether. It's followed by the impossibly carefree, inherently damp 'Bicycle.' A two-wheeled waltz through slippery city streets - "from under our feet, the rain paints the street with the stars" - 'Bicycle' goes thoughtfully quiet before exploding into liberated ecstasy, the riders appearing to have broken free of the confines of the urban sprawl they've been traversing.

At around seven minutes each, eclectic long'uns 'Stop Talking' and 'Graphics' are both in possession of characteristically catchy chorus lines. In what appears to be an attempt to keep the listener's attention from wavering, the songs nod vigorously to the likes of Kraftwerk, New Order, 808 State, Nintendo and instant messengers, all at once. This tactic does work, in part, but it would be futile in the absence of the brilliantly crafted hooks. As it turns out, each song is well-stocked with brilliantly crafted hooks.

"Suicide, you know you mean well" mopes the contemplative 'Plain Material' as it immerses itself in a deep body of water. A disembodied flashback is narrated to a sympathetic goldfish before the lungs finally give in with a wistful "what a beautiful dream".

Having greedily sucked the Tapes blog dry of every note I could find without so much as a by your leave to the chap generous enough to share his creations with a bunch of strangers, I waited for Seek Magic's release tingling like a tuning fork and hoping he wouldn't pull a Big Pink on me. He didn't. Seek Magic is probably my favourite album of the year. A slightly overdue thank you, Mr. Hawke.