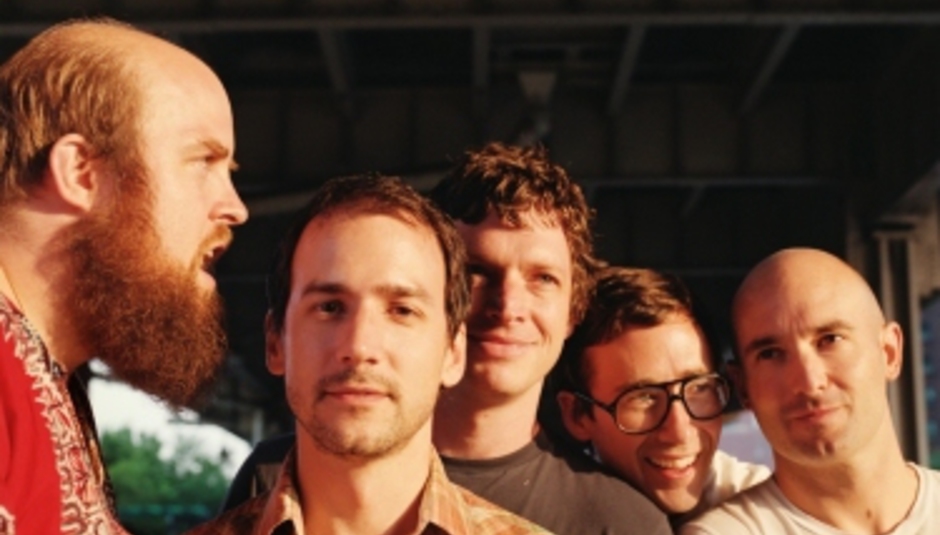 Sunday afternoon, just after five; the sky above London, from the South Bank looking towards Parliament, is a flood of pinks and oranges; blue’s been relegated to the horizon line, darkness still some way off. Spring’s edging nearer, and Les Savy Fav’s Tim Harrington (vocals) and Harrison Haynes (drums) are all smiles as they point their camera phones towards the uniquely-coloured canvas before us.

Haynes captures the vividness perfectly; Harrington and myself, less so. We slip into the café of the Royal Festival Hall, leaving the scene outside to fade to black. Minutes earlier we left the Hayward Gallery, presently home to Laughing in a Foreign Language. Haynes was especially keen to check out the exhibition, as he and his wife have just begun to represent one featured artist, Taiyo Kimura, in the States (the pair founded a gallery in New York). Harrington chuckles to himself as we stroll from video installation to the pen-on-paper scrawls of David Shrigley; clearly both he and Haynes have their minds on other things than their show at the London Astoria (review) in a few hours’ time, their biggest headline show to date in London.

Inches, primarily a collection of Les Savy Fav singles charting their progress since inception in 1995, is soon to be re-issued via Wichita; it’ll be the first time the record’s been available in the UK, officially, following its US release via the band’s own (ish – bassist Syd Butler is the core operator) Frenchkiss label in 2004. But as we sit down for a pre-show snack, it’s made clear quite quickly that the four-piece – completed by Seth Jabour on guitar, and expanded to a quintet by Andrew Reuland (second guitar) when live – don’t see their rapidly rising profile as an indication that the band’s become Plan A in their professional and personal priorities.

(Note: Tim is eating lamb stew, Harrison a muffin; I am eating a sandwich and drinking a cup of tea. Yes.)

Harrison: What’s that got innit?

*T:* Innit. It has satisfying flavours.

*H:* Please omit this bit when Tim and I are bickering over which spices they might have used for this particular lamb stew.

*T:* There’s something else going on in here… it’s worth knowing.

*H:* Please continue. Is that recording?

*T:* That’s one minute, ticked away. You’ll never get that back.

*H:* This muffin is so good, I’m gonna have to chase the dragon on this resin.

(Harrison lifts the paper to his lips, pretending to burn the bottom with a lighter, smiling wickedly.)

*T:* Harrison is using a professional-grade electronic lighter to burn the bottom of his wax-paper muffin holder.

*H:* Using techniques I have only learned through watching movies of suburban kids smoking heroin. Off a piece of tin foil.

Okay, shall we talk about Inches. It’s already out, and now it’s coming out again… explain.

*H:* Oh yeah, good idea. A classic other example of our inability to get across an idea for a project to people that are in an industry where the quality is often based on viability. I’m not saying…

*T:* No, no, wait._ Inches, when it first came out, it was met with critics calling it a collection of singles and b-sides. Normally that means it’s ‘junky’, but for us it’s the BEST _thing. It’s the fan favourite, I would say.

*T:* It’s elaborate… it’s super what the band’s about, a concept that doesn’t really sink in until… Okay, there are these weird conceptual things we’re obsessed on…

*H:* Here’s what it is. In a way we’re trying to highlight the discrepancy between us and the ideology of the music industry, but we’re also discriminating between us being musicians and us being fans. It is not masturbatory as a band; it’s fantasy as a viewer.

*T:* Of ourselves, really. Like, before we were even a band we’d decided we were going to make this 18-song album, and always include special songs. At the time there was the Sub Pop singles club, and lots of others, and all these great seven-inches… And remember that in the States singles aren’t like they are here. They were dying there, so we had this idea where the singles would be the most important thing for us.

But it’s not strictly a complete singles collection…

*H:* The most difficult aspect of Inches for people to understand is the way that we kinda cheated. In essence it’s supposed to be – and this is to the credit of those who do misunderstand it – a collection of tracks as a retrospective history. However, we did some time travelling – we released it three-quarters of the way through. We fast-forwarded, saying_ “Fuck it, let’s get this project finished”_. But to finish it we needed to finish the last quarter of it at the time of release. By the same token, that’s what keeps it from being a singles collection, as there’s essentially this EP of songs included – songs that people had never heard. They’re not b-sides.

*T:* Nobody in the band has the whole collection of singles.

*H:* What’s the art? The coffin in the hillside?

*T:* But it never got printed right.

*T:* You’re the only person that does, then. We were gonna collect them, so we could sell them all on eBay!

You’re keen that people don’t see it as a simple collection of seven-inches?

*H:* I hope that Wichita, or at least English people who are more sophisticated in their appreciation of our band, will be able to… Well, the great loss of its interpretation is that we saw it as a brand-new EP as much as it was a retrospective, and that was totally overlooked as it was seen too much in the light of being a retrospective. Songs like ‘Meet Me In The Dollar Bin’, for instance.

*T:* We can put out pretty much whatever we want in the States. Having Frenchkiss, Syd’s label, makes that easy. Over here, the talk’s always about re-issues. And this is the band’s favourite thing, but most people have already downloaded it or got it off friends. It’s not been really available here; now it is, or will be, and I hope that it’ll be cool. The packaging has a shit-ass million pages. We’re spending the Bloc Party money. Like Six Finger Satellite.

*T:* Six Finger Satellite were on Sub Pop, but never did well at all. They were the joke, bankrupting the label. The final record they did before they broke up was printed entirely on clear vinyl with acetate packaging – the whole thing was basically see-through.

They were losing money per sale?

*T:* Oh, sort of. Luckily it sold so few that they actually only lost about $30. It was high-concept aesthetics, though.

It seems that, as the band gains a higher profile, you’re still able to control how you’re represented.

*T:* It’s doubly awesome. I feel that we’ve been lucky, through our fans and our press…

And it’s key to maintain this control? You’re not likely to give the reins over to PR, or your label? The reins of access, for interviews such as this one…

*H:* It’s back to the idea of the Six Finger Satellite thing – it’s all an ‘edition’.

*T:* It’s like a limited thing. I think the band’s not that patient. The realisation when we did Inches, that the band has, was that we were as satisfied if 50 people or less came to see us perform as we would be if 2,000 people came to see us. And to, like, seriously and really completely… Well, having that attitude means that you can do anything, or not do anything, and people come to you because it’s not the norm anymore. There was a point when a lot of us got into music where that was the_ de facto_ law, because there was no success for any punk or hardcore bands. It’s hard to keep track of, and to be comfortable with that reality. But being like that makes us seem that much more exotic to people nowadays. The prospect of having a professional band is so much better now than it was before.

And do you guys feel like the band is now your ‘Plan A’, professionally? Because I know you’ve other pursuits. (Read this interview with Syd for more on that.)

*T:* Definitely not. Less than ever before. We have fully corralled it into this project, and by playing less – way less for a while – it’s now very contained. If we don’t feel like playing a show now, for any reason, we just won’t. That’ll never happen on a tour – we’d never skip out in the middle – but we turn do turn down shows. It’s more that we’re a band made up of musicians who are not career-minded musicians. We have to be careful to not do it all of the time, and to not slip into the mindset of wanting to do this when we’re all 60. We can do this band for a lot longer, but also explore other parts of our lives. If you don’t want to do something forever, never focus all of your energy into it. Some bands work really hard, and then ten years – or five years later – suddenly there’s no band and you don’t know what you’re going to do. Nobody in this band is going to leave and become actuaries.

It’s quite refreshing, really, that this isn’t ‘all you know’, y’know?

*H:* Music is not our life, and being in this band is one part of the expressing of that one side of our lives. We do all different sorts of stuff, and the band is one expression.

*T:* We’re interested in art, and creative things, and the band is one part of that. I think if you’re only interested in music, when you stop being in a band you move into A&R, or become a manager guy. That’s what they know. With us, the band is this really weird outlet for four art-school guys – it’s impossible to distinguish who’s creating it, and it has an audience who wants to see it. If you go to a gallery, there’s nobody throwing high-fives or drinking beers.

Mouthfuls are swallowed, crumbs brushed from table to palm and then back onto barren plates. We step outside, into where once a brilliant painting hung; now night-time revellers are swarming, and as we walk the roads from the Hungerford Bridge to the Astoria – roads closed for Chinese New Year – we talk more: of nonsense and not, trips to Barcelona (Les Savy Fav will play this year’s Primavera Sound in the city) and to ATP (there, too, this May). Tim is animated, darting towards a stall in search of a new hat only to be disappointed by the abundance of logos over any likeable design. I leave them at the doors to their own show, touts waving tickets in their faces. Nobody queuing outside seems to really recognise them; the odd spark, perhaps, but no squeals of fanboy excitement.

Perhaps I’d used them all up earlier in the afternoon, when told I’d be escorting the pair around one of London’s finest art galleries. Some days, you wish, really should never end.

Let’s Stay Friends by Les Savy Fav is out now on Wichita; Inches is released on March 10. For more information visit the band’s MySpace site HERE.