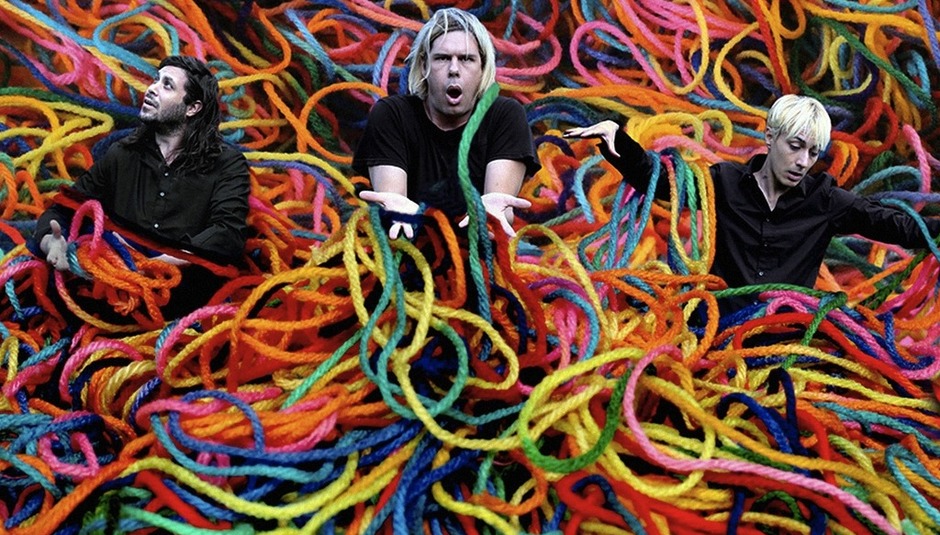 Indeed, the act of “going electro” can so often reek of desperation, opportunism, cynicism, ineptitude, insincerity, insecurity, artificiality, charlatanism, unscrupulousness, creative constipation, etc., etc., etc. Yet there is one band who have pulled off this demanding trick with rare and enviable aplomb. Liars’ Mess is the second record of the trio’s “dance” phase, following the bold makeover of 2012’s WIXIW. If large sections of that last record were characterised by a downbeat Kid A-ian sparkle, Mess is mostly a maxi-throb take-no-prisoners arty pulse monster.

“They say I’m not a teacher”, frontman Angus Andrew chants on ‘Vox Tuned D.E.D.’ Au contraire, Liars! Fellow musicians can learn much from your ingenious transformation. Not learn how to be commercially triumphant, per se. Not like that number one Keane album that sounded like Simple Minds. We’re talking artistic/critical/muso success here. I don’t know how healthy or desperate Liars’ finances are. And who cares, so long as they’re able to keep making records? What matters is that, seven albums into their remarkable career, Liars remain one of the most enigmatic, creative, and mind-shaggingly exciting bands on the planet. Here are a few lessons that Liars’ music can teach other groups who might be considering a wee trek down the perilous path of “introducing electronic elements into our sound”:

i) Think progression rather than transformation

Looking back, the shiny synth-tastic vibe of WIXIW shouldn’t have come as such a shock. Despite their prior records having been rooted in traditional organic instrumentation, Liars’ career was marked by a distinct creative restlessness with a devoted commitment to swim ever forward. Tracks such as WIXIW’s ‘Flood to Flood’ and ‘Brats’ (see embed below) or the new album’s ‘Vox Tuned D.E.D.’ and ‘Pro Anti Anti’ are infused with the same inherent, unhinged tribal spirit of Liars’ earlier material. They just look a little more futuristic on the surface. He may be dressed up in tin cans and baking foil, but deep down Robocop is still Alex J. Murphy.

(Of course it helps if you’re as brilliant as Liars to begin with. Just try to make your electro conversion look kinda natural, like what New Order did. As tempting as it is, don’t suddenly release a single that sounds like a shit Eurythmics b-side.)

Remember that slogan from the punk era, “here’s three chords now start a band”? Well here’s a second-hand synthesiser with one of keys missing and gaffer tape holding in the battery, now make an album! Do It Yourself! Learn from your mistakes. Keep the pungent, haphazard errors in the final edit instead of autotuning them into oblivion (see point iii). Exploit the originality that blossoms from amateurism. You know, like back when you first picked up a guitar and didn’t know what the hell you were doing and you came up with some really cool, peculiar and unprecedented riffs, rhythms and sounds and then when you started touring and mingling with other professional musicians you suddenly felt inadequate about your talent, approach and equipment so just to fit in you signed up to Club Axe-Wank, studied some scales and learnt what “key” actually means and then soon enough all your compositions started to sound like U2 or the Eagles or Dire chuffin’ Straits. You can’t turn back the clock. You can’t unlearn those things. But you can pick up a charity-shop synth and start all over again. And when you start to become proficient at that, when you start to sound less like Seattle’s Crypts and more like Birmingham’s Duran Duran, it’s time to chuck away the synths and begin anew with the bassoon or the clapsticks or the penny whistle. “I hope you never learn to play music,” Andrew sings towards the end of Mess. Shrewd advice for himself and his own band.

p.s. You ought to resist chartering some über-producer to sort everything out for you. Don’t hire Skrillex. He couldn’t help Korn and he can’t help you. (To reiterate, I’m talking artistic success here. If you aspire to be a cosmic commercial sensation I’d suggest hiring Pharrell, Nile and those silly French droids.)

p.p.s. Admittedly, there are exceptions. The DIY electro tracks on Mogwai’s latest disappointment (Rave Tapes) are cack-handed Errors-lite bodges of robo-fluff. Conversely, Primal Scream’s astute hiring of wunderkind producers is exactly what’s saved them throughout their career from being little more than a nonsense-spouting pub-rock laughing stock.

iii) Seek out the brown sound

It’s a great shame that freaky oddball duo Ween never made a full-bore electro record. The closest they came was a collaboration with Reinhard “Crazy Frog” Raith on the Friends EP (that title track, BTW, is an absolute triumph, guaranteed to put a smile on anybody’s face. It’s since gained a bonus underlying poignancy, thanks to Ween’s inimical split). “Brown” was the adjective that Ween used to describe sounds that were “fucked up in a good way”; glorious mistakes that were stumbled upon because the battery was dying in a distortion pedal, for example. Even though Liars are clearly gaining confidence and skill in utilizing their electronic equipment, after the tentative experimentation of WIXIW, Mess is still brimming with brown. Amid wobbly synths backed by drums that throb, thump and splash, Mess opens with a distorted Angus Andrew monologue demanding that you “take my pants off... smell my socks... eat my face off... take my face... give me your face...” There’s a short break later in the track where the music stops and we just hear a coughing sound. You can’t get much browner than that. The appropriately-titled Mess is covered in cockeyed, fruity, and inimitable noises that bounce, swarm and splodge around inside the listener’s lugholes like a weird-but-welcome ear enema. Even the slower tracks are enchantingly warped. The ballad-like ‘Can’t Hear Well’ is deformed by its quivering effects into something beyond a ballad and the album’s closing number is bathed in desolate distortion and lighter, rosier twinkles.

I think this attitude may have been what Dave Grohl was getting at in that documentary about how he has accumulated the wealth to flippantly purchase a sound-desk of which he is sentimentally fond. As Grohl preaches, it is vital to remember that accidents and mistakes and not using computers are crucial to the creation of good art (unless, erm, Trent Reznor is fondling the mouse). It’s a noble message, even if every Foo Fighters record since 1995 has been coated in more polish than Joan Rivers’ fingernails. Do as Grohl says, not as Grohl does.

Even more than its predecessor, Mess is loaded with what Miley Cyrus and her ethnically-sourced homies might deem “bangerz” (or perhaps not - Mess is probably a little out-there for those who think radicalism involves prancing about in your pants, tonguing industrial hardware and wailing generic pop ballads). Your electro record needs to get the blood pumping, like PRML SCRM did on XTRMNTR. You can’t just widdle out some half-baked substandard synth-pop, like Primal Scream did on Beautiful Future.

When the Manic Street Preachers asked themselves “how will we fill that void over at stage-right left by our iconic lyricist, sloganeer and mime-guitarist Richey Edwards?” and came up with the answer “Nick Nasmyth on keyboards” it was downhill from there. Did you ever manage to sit through the entire 46 vanilla minutes of the Manics’ self-proclaimed “elegiac pop” album Lifeblood? Of course not. By the end of track four, you’d torn it out of the CD player, hurled it into the next door neighbour’s recycling refuse box, and stormed off in the direction of Wales to hunt down and reprimand all those responsible. And rightly so. Had the Manics, on the other hand, used their keyboards to reinvent Generation Terrorists as bruising middle-aged transgender electoclash, they might have been onto something.

v) Be signed to Mute

Barely an interview goes by where Liars don’t praise the virtues of Mute. Liars have been signed to Mute since 2004 during which time they’ve presented their label with witchcraft-exploring and percussion-worshipping concept albums, more song-based but still esoteric post-punk opuses, and now this newfangled electro gubbins. Any standard record label would’ve got confused, agitated and distraught long before now, dropping them quicker than a hot non-genre-specific potato. “What the f!@% you doing? Which direction you heading in now for Christ’s sake? Who’s your demographic here? What do we even call this? WIXIW? And how exactly is that f!@%ing pronounced? We can’t market this shit.”

Almost every Depeche Mode record has been released by Mute and its boss Daniel Miller also co-produced their first five. His label has released influential records by the likes of Erasure, Yazoo, Moby, Add N to (X), and Goldfrapp (not to mention indier stuff like the Bad Seeds). Clearly, Miller is an open-minded pioneer who knows his electro onions. Miller provides Liars with creative freedom and cherished feedback. He is so valued, in fact, that one of Liars’ ten commandments for creativity is “THOU SHALT LISTEN TO DANIEL”

Unfortunately, I don’t know how you actually go about getting signed to Mute in the first place.

Maybe buy Vince Clarke a pint and ask him to put in a good word or something?

Related: Join the conversation and hear the stream of Liars' new album Mess over on our forums.