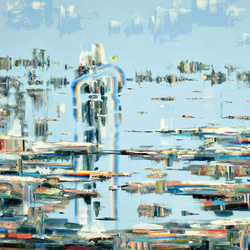 O how you vex me, Dayve Hawke. You vex me because I know you are just one person, yet two of your three alter egos have names in t»

memory tapes is a one man band based in new jersey. he's been dropping bombs (as memory cassette and weird tapes) on gorillavsbear through 2008 to huge acclaim and massive blog proliferation. 'seek magic' is the debut album - limited to just 1000 copies on light blue vinyl on acephale records. the sound is nostalgic both aesthetically and emotionally - so there is little surprise when comparisons drift to outfits such as cocteau twins, my bloody valentine, new order and boards of canada. more established pop references come through as well with echoes of classic motown and girl groups. this is the first in a steady stream of releases from memory tapes. he wants to make two albums per year. next up is a psychedelic girl group record. what is there not to love?
description from www.roughtrade.com