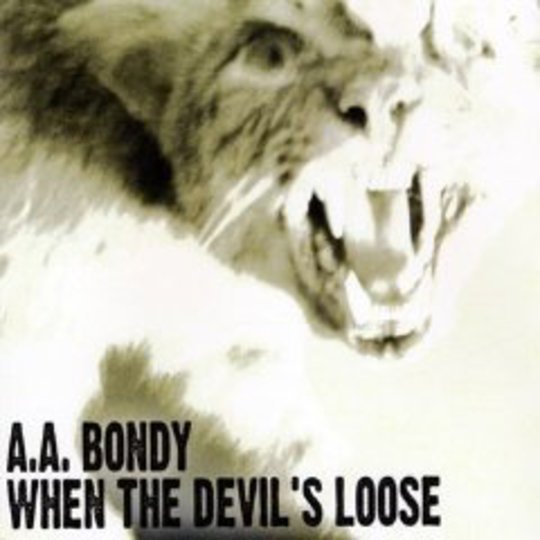 When The Devil’s Loose by AA Bondy is a good album, but some way short of being a great one. It may seem like a strange criticism to make of a singer songwriter, but the spectre of Bondy himself hangs over this record like a crushing weight. Opener ‘Mightiest of Guns’ is genius, a hazy, saddle-worn lament to murderers and fiends, worrying about a special someone too gentle to exist amid such brutality. The lyric “Your sadness it is quite lovely, but it’s the sadness of a slave” suits the husky, emotive delivery wonderfully; unfortunately the same cannot be said of the rest of the album.

For much of When The Devil’s Loose, a subdued feel and a melancholy abounds without really feeling justified. Of course it is ridiculous to second guess the emotional state of Bondy when writing the material for this record; the honesty of his sober words is never in doubt either, but a few tracks in, a disconnect gradually appears between listener and musician. The work of a troubadour is all about the cult of personality, and Bondy’s main failing is being unable to quite sell his like the best of his peers would. Make no mistake, this is a deeply personal-sounding album, but there is a certain singularity of pace to When The Devil’s Loose which makes it hard for the listener to really inhabit the stories of complicated love and loss Bondy spins.

‘To The Morning’ is symptomatic of this problem; a jaded waltz with such a sparseness of guitar and drums that it is dominated by a slightly pedestrian bass. Like all of the lesser moments on this record, it is not a bad song; it’s just not an engaging one either. Pointing out the deficiencies of Bondy’s work is not an enjoyable task; there are far worse offenders in this world, and on the moments of When The Devil’s Loose he is on it, it makes you wish for his own sake he could produce that standard more consistently.

It's a standard shown nicely on the track ‘On The Moon’. The dusty, baroque piano of this song seems to bring out the best in Bondy’s vocal. His delivery here is noticeably fuller and more nuanced than elsewhere on the album, and the chorus lines “And the roses die and bloom, and I’m dreaming in my room, that you and I fell into the sky, and went dancing on the moon” is genuinely affecting in the way tracks like ‘To The Morning’ fail to be. In the hands of a different producer maybe the material assembled for When The Devil's Loose could step forward into something more Technicolor, as its faults are minor, but they are the faults which separate merely pleasant albums from great ones. As it is, When The Devil’s Loose is the former.