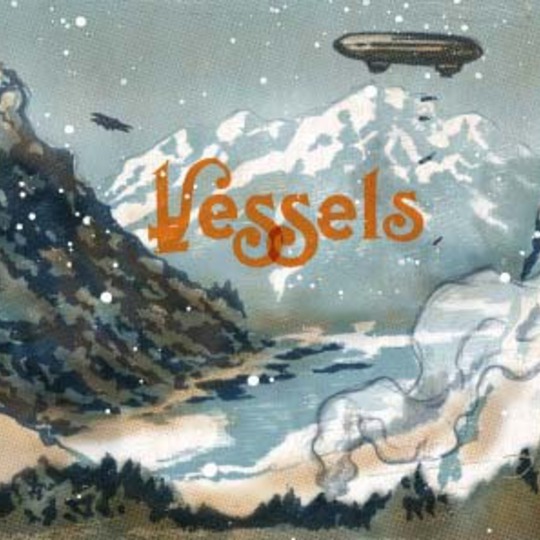 In recent years, the term ‘experimental’ when applied as a musical genre has digressed into something of an excuse for bands who wouldn't know a tune if it kneed them in the groin and slapped them in the face to hide behind; it has become an almost symbiotic apology that justifies each other's relative existence.

And then of course there's that old chestnut: ‘post-rock’. A breath of fresh air a decade ago when first unleashed on an unsuspecting audience, carving through the stagnant remains of Britpop with the incision of a pork butcher mastering his trade; but nowadays impostor-upon-impostor has rendered the genre about as predictable as a Premiership title race, and with about half the excitement.

Enter Vessels, a band whose mere existence seems to be built upon by continuously confounding and subsequently exceeding any kind of pre-conceived expectations either the listening public or indeed band members themselves may have. While some of the influences may be pertinently obvious on White Fields And Open Devices, the places where they crop up and rear their heads may not be quite as easy to spot, or indeed fit in with the age-old structural template of fast-slow-fast, quiet-loud-quiet. Nor, thankfully, is this record an exercise in post-rock posturing. Instead, Vessels have created something that is both unique and alluring which should endear them way beyond the chin-stroking legions of Mogwai devotees.

Not that anyone fortunate enough to have seen their live shows over the past year would have expected any less. The promise of early singles 'Yuki' and 'Two Words And A Gesture' was evident from day one, the missing ingredient at the time being a decent recording of either. Thankfully, the band's choice of The Paper Chase's John Congleton on production duties, a man previously responsible for turning Explosions In The Sky's All Of A Sudden I Miss Everyone into the masterpiece it has since become, was an inspired one. The re-recorded versions of those aforementioned singles glisten with an effervescence not previously heard on their limited edition 45 formats, 'Yuki''s piano-led signature providing a classical-themed yin to 'Two Words And A Gesture''s jazzy prog-folk yang (think Youthmovies covering The Twilight Sad's 'Mapped By What Surrounded Them').

The rest of the record proves to be as equally captivating in many different ways, not just in the way that the slow-build up of opener 'Altered Beast' and grand finale of closer 'Wave Those Arms, Airmen' seem somehow linked, like the titles and credits of a film. This is where we begin and this is where you end; it's been said before, but one can visualise Vessels writing cinematic scores in the future.

Their dalliances with metal, abstract dance beats and lo-fi folk also shouldn't be underestimated. 'A Hundred Times In Every Direction' begins dissipated, almost like a drum machine in slow motion, before the guitars kick in, aided by a stampeding onslaught of drums halfway through that brings to mind how Battles might sound if they ever developed post-hardcore tendencies into their music. Likewise 'Happy Accident', with its eerie sampled voiceover of obscure American TV presenter Bob Ross as an introduction to the deluge of guitars and electronics that follow, could almost be an obscure Warp Records release if it weren't for the truly ferocious delivery. Then there's 'An Idle Brain And The Devil's Workshop', where math-rock time signatures collide with gargantuan metal riffs in the song's last third, the word ‘epic’ not quite doing the end results justice.

Of course there will always be some who are sceptical and ultimately dismissive of mainly instrumentally-based, experimental rock albums such as this, and on hearing White Fields And Open Devices I'd say the five members of Vessels are almost certainly among them. Which is exactly why they should be commended on making one of the most forward-thinking, non-generic records you're likely to hear this year.