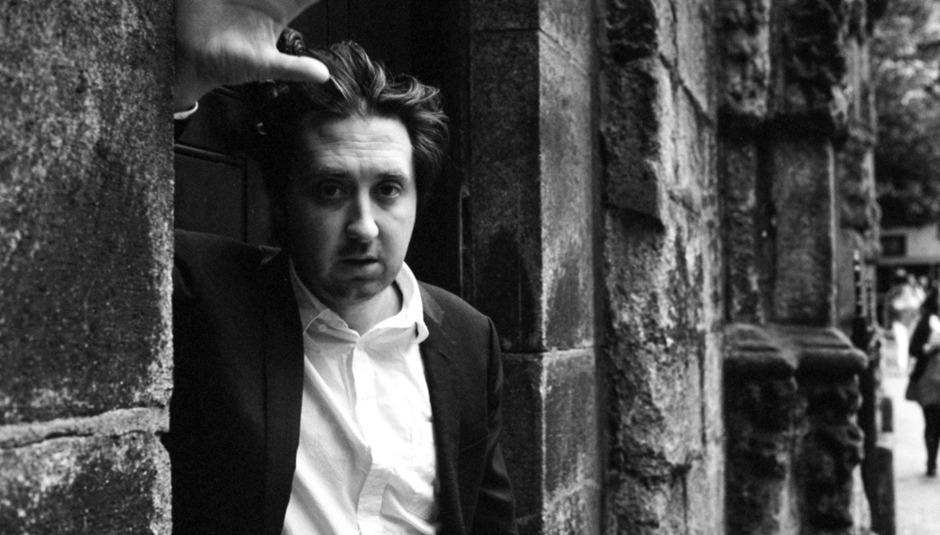 When The Walkmen disbanded an outpouring of love and glum hit the world of DiS. In fact, this tribute that we ran in the aftermath of the band's decision to call it quits (before murmurs that it might only be a hiatus) was one of the most shared articles we've ever published, such is the love for the band.

On June 16th Memphis Industries / Mexican Summer will release Peter Matthew Bauer solo album Liberation! (exclamation mark is the artist's own). Bauer is a founding member of both The Walkmen and The Recoys, but he says the new album is a collection of mostly autobiographical songs on the topic of belief and its various incarnations and phenomena.

According to the press gumpf, the record touches on subjects such as growing up in a Hindu Yoga cult, Scientology, the city of Philadelphia, the God Shiva, the city of Varanasi, Richard Dawkins and Jorge Luis Borges, and was heavily influenced by the work of Roberto Bolaño & Elvis Presley. But what I hear above anything else, is that dazed swirl of New York's Lower East Side. Not that it's Velvets or Murray Street indebted, but similar to that tv-dream-sequence-o-vision of cultures-of-the-world seen through the sidewalk steam and heard over the rumbling subway trains that permeated Lee Ronaldo's recent-ish solo record and The Walkmen's finest moments. Maybe it's just me, but there's something that these British ears associates with the Big Apple and this sort of thing. Although, having said that about nYc, the press release does point out that his band is made up of "dirtbag greasers" from Fishtown, Philadelphia and Austin, Texas.

Listen for yourself and bathe in its rambunctious wonder:

I Was Born in An Ashram

Hello out there & thanks for listening. This first song is about being a kid and about the world coming into focus all around you. I spent a lot of my childhood in an Ashram. After awhile, a lot of unsavory business rose up around the place. So some of the songs relate to that, these whispers you’d hear as a teenager, of all these dark shadows hanging around. I think it’s very unusual that all this negative stuff arises, and yet, so many of these people are having these very strange, authentic spiritual experiences. That’s the sort of energy I was trying to get at – that paradox, which as you investigate it more, really seems to make more and more sense. The song is made up of acoustic guitars, a mridanga drum, a lot of backup singers, and 8 tracks of pianos recorded through a 25 watt Supro amplifier.

I wrote this in the city of Utrecht in the Netherlands after staying up jet lagged and confused for several days. It happened right about the time I was first trying to figure out how to sing and so the title reflects Roberto Bolano and Jorge Luis Borges, who were huge influences in trying to figure all of this out and who come through in a very backward way in the song. The guitars are all 1956 Gretsch Corvette through blonde Tremolux amplifier.

This one is about my experiences in the city of Philadelphia, different friends and characters, trying to get at this weird euphoric wandering feeling that’s hard to explain. I finished it the day after Easter last year. It features several tracks of Harmony Sovereign acoustic guitar and my pal Quentin Stoltzfus on the drums. We recorded a lot of the record at his factory space and at his house in Fishtown Philadelphia. The 700 in the song is a bar where Quentin and my man Mickey Walker hang out.

This song is about archetypal language, writing music by entering into archetypal fields. It’s about Indian astrology, Rahu, the north node of the Moon and a conversation with my wife’s childhood friend. People say it sounds kind of Springsteenish.

This song goes hand in hand with the last one. It’s about the deity Shiva, Osiris and Isis, Orpheus and Eurydice, maybe the Bardo plane. I think it may be about a dream I had when I was a kid. I started writing this as we were tracking another song and we sort of tacked on little snippets of it to tape as an afterthought. Eventually I just cut it all together into a song. It features some guitars, bass, Quentin’s groovy beat, farfisa organ and some piano loops.

I started writing this by trying to rip off Bob Marley’s “Destiny.” The word “Liberation!” popped into my head and I had this big idea for a very polemical sort of song, kind of poking fun at this idea that it takes a 1,000 years or a 1,000 lifetimes to make it where you want to go, or that Heaven is gonna be anywhere else than what you make of it. In the end, I was reading that Bulgakov book “The Master and the Margherita” that week and things just got stranger and stranger. I still think the sentiment comes across. This one features my man AM Mills on the drums who came in and one-take jaked that drum beat in about 10 minutes and was out the door before I even saw him. It also features 20 or so tracks of piano that I recorded in 100 degree heat one afternoon that I’m not sure anyone can even hear except myself.

Sometime last year, I got on a plane for Santiago, Chile and the passenger sitting next to me roped me into a story about his wife, a Scientologist, who was pregnant and leaving him to move back to Russia with their unborn child. All of the people around her had labeled the guy a suppressive. The guy’s name was Frank I think. He was a physicist. So the song is about that in a lot of ways. Also Lawrence Wright’s book Going Clear which I was reading in the same period and another story, maybe apocryphal- once overheard in Washington DC. The music is acoustic guitars run through a Leslie by my friend Matt Oliver in Austin Texas, several pianos, backups through cassette players.

This one is an old piano part I had lying around and, as the title relays, some field recordings. The buzzing sound at the end is a soccer stadium full of vuvezelas.

I wrote this in the town of Metz in France, on the same trip as I wrote a major piece of the record. This song is about my father’s best friend who passed away say a decade ago or so. I guess it’s also about my father who’s lived a very interesting life and about my own interactions with his world. The idea of the song comes from the sound of the speakers in the minarets of a mosque, hearing the voices of whoever you love, whatever it is you call love through this reverberating, saturated call through the city.

This one is about growing up in Washington DC and about looking back at old friends who’ve gone in some difficult directions. The instrumentation is acoustic guitar, vox continental organ, pianos, a single drum hit over and over, and some guitars right at the end. There is a truck backing up in front of the factory we set up little our recording rig in for about the first half of the song.

You Are the Chapel

I wrote this song to be the closer for the record because I knew I wanted it to be full of joy and over the top, because that’s how I wanted to go out. I was thinking about “Trouble in Paradise” era Randy Newman when I recorded it- also Lou Reed because it’s a talking song. I came up with the idea for it in a bathroom at Leeds University watching all these punters doing what they do while the band Savages was playing in the hall. Here was this incredible band just tearing up the place unequivocally and these typical assholes with nothing better to do than create this terrible scene all around us. So that was the start. Later I put in a couple of lines about Fats Domino, Bob Marley, Edmund Husserl, a verse about a night in the Basque country my wife and I spent with these two older scientists, drinking a cask of wine and listening to them translate Victor Jarra records, talk about the human and the fly genome, and lament about their boy in Barcelona. There was also a verse about the New Jersey Turnpike- “the black dragon” I just learned it’s called- which I later cut- maybe a few others I can’t even remember. The idea was to get as much as you could into one song without anyone knowing it so that through my own personal experience I might arrive at something that expressed something, anything at all, to someone else.