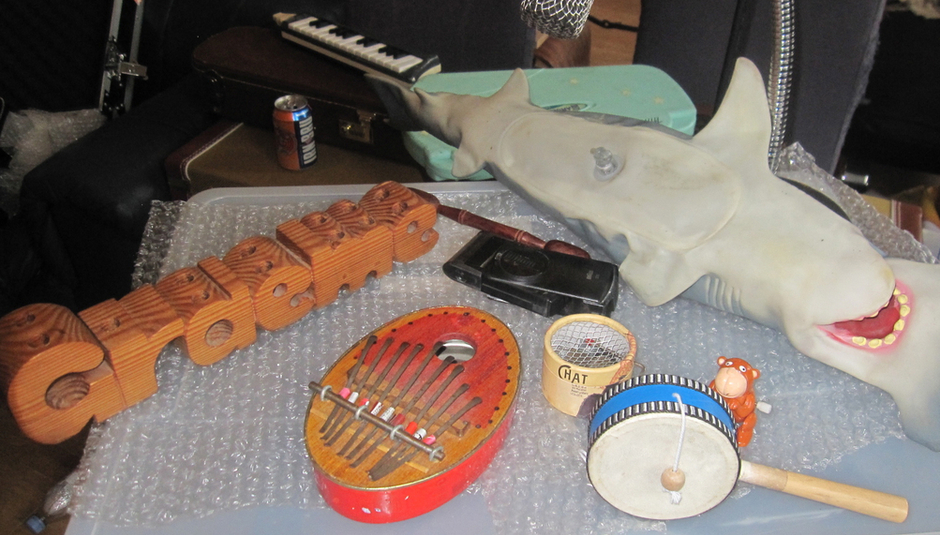 Remember Remember began as the solo musical outlet for multi-instrumentalist Graeme Ronald. His love of understated repetition, chamber pop and Steve Reich-style process music, as well as his use of both traditional and abstract instrumentation (wind-up gizmos, toy sharks and the like), culminated in 2008's self-titled debut album. After nearly three years of preparation, Remember Remember now return with their third album Forgetting The Present, released this week via Mogwai's Rock Action label.

Here, Graeme talks us through some of the more unusual "instrumentation" Remember Remember have used over the years, from inflatable sharks to bubble wrap...

When I started making music as Remember Remember, I was on my own and limited by what instruments I could play. I had made a vow to myself not to use drum machines or software instruments, so I had to get a little bit imaginative with my instrumentation. Toy instruments, office stationary and fortuitous gifts have all found their way into my sort of pound shop version of Musique Concrete:

Always re-use your Bubble Wrap! Not only is it good for the environment but when mic'd up and fed through the right delay settings it could be the cheapest drum machine you've ever bought.

I wondered for years how electronic producers from the early 2000s made those poppy, glitchy drum beats. I still don't know but I have found that bubble wrap does the trick for me. I like to feed the sound of me popping the plastic bubbles through two delay units. The first, shorter delay to set the tempo (and keep me in time) and a second, longer delay to create a loop. This technique can be heard on the track The Swimming from the first Remember Remember album.

Endlessly versatile, I find bubble wrap an essential sound designer’s tool also. With a bit of imagination, a loop of echoing bubble wrap pops can sound as much like the crackling embers of a dying fire as it can a dusty needle skipping along an old record. Furthermore, popping bubble wrap is simply one of the most satisfying and therapeutic activities one can partake in.

Sadly, the shark pictured here is not my original great white bath toy that I purchased from Paddy's Market (sadly also no longer in existence) in Glasgow circa 2006. It was a good haul that day, I managed to pick up a sweet pink ghetto blaster accompanied by Prince's Batdance cassingle and a white all in one TV/Radio/Tapedeck 'entertainment cube'.

But I digress. My original shark suffered from some kind of deep sea laryngitis, in that its 'squeak' was sadly absent. However, in place of the squeak came a deep, breathy wheeze that when fed through a mic created an instantly intense, heavy breathing atmosphere. I used my shark at a lot of gigs but sadly never got a chance to record him before he was lost. I hope whoever has him now is having as much fun as I did.

A theme may have emerged throughout the course of this article that I am something of a cheapskate. As such, although I know there are several purchasable music apps for mobile phones, I still insist on using the freebies.

The Ethereal Dialpad is a wonderfully simple touch screen, theremin-style synth that has some nice options for changing scale and harmony through a choice of colourful interfaces. Swiping the phone quickly against the pickups allows me to add a volume swell option to the dialpad. The 'guitar solo' on our song Lips'from the RR Scorpii EP was generated solely from the Ethereal Dialpad.

The Tanpura Droid is a not entirely tasteful attempt to simulate the Tanpura - an ancient traditional Indian stringed drone instrument - on a mobile phone. I was a little wary of ever using it, as it's a potentially comical sound and I'm generally opposed to using software instruments or pre-packaged samples. I reason, however, that using one's phone in this way is perhaps equivalent to the use of electronic drone boxes that have happily found their way into contemporary eastern music. For the song Why You Got A Blue Face? on our new album I tried out several different approaches for creating the correct Alice Coltrane-esque, dark droning pulse but in the end, the Tanpura Droid was just right.

In a similar technique to the mobile phone, an old battery powered electric razor held against guitar pickups can make for a half decent budget Ebow. Of course, you'll never get the melodic control or tuned feedback generated by a genuine Ebow, but with the right effects chained after it, and perhaps a couple of different models for slightly different tones, a razor can help your guitar summon a swarming army of malevolent hornets, or some novelty race track effects, depending on your mood.

For 60EUR from a market stall in France, this instrument is certainly one of the pricier pieces in my collection. And indeed, I was mocked for parting with such an amount of cash on what is essentially a modified sardine tin. I love this instrument dearly though. It's made a cameo appearance somewhere or another on every Remember Remember album. Played with the thumbs, and very addictive, I like to think to think of the Kalimba as a sort of primitive Gameboy or alternative to texting. You see 'nicer' versions of these African thumb pianos in those sort of hippie, world, 'craft' shops, made from nicer materials perhaps, although I've found that those ones have fewer tines and are less versatile. I've had this tuned to all sorts of different tunings just by pulling the tines in and out to different configurations. Also, I used to have a small contact pick-up moulded onto the back of this, which let me amplify it, and even allowed me to use it as a noisy, metallic sounding microphone.

Quite often the items most valuable to you are those that were given as gifts. I am extremely fortunate to own this incredible instrument, of which only a handful exist. It was given to me as a sort of permanent loan by a musician friend, who himself received the instrument from its creator, Tony Da Gatorra - A Brazilian musician, electronics expert and crusader for peace and love - who hand builds the instruments that bear his name.

Looking a little like a Keytar, the Gatorra is in reality a type of drum machine and synth, built to resemble the shape of a sickle. It is practically impossible to play, only in as much as it is so unlike any other musical instrument I have ever encountered. The difficulty, however, makes the adventure of making powerful sounds, even more rewarding. When Remember Remember was a solo venture, the Gatorra was my drum kit, and set closing secret weapon … I've never encountered a device so adept at generating wild untameable noise, with such a message of love at its heart.

The drum beats and noise section from the Remember Remember song Fountain Mountain were created with this incredible device.

This beautiful old bicycle belongs to my wife. We have more lightweight bikes for getting ourselves around so I'm afraid to say this spends most of it's time sitting in our front room. We recorded our new album Forgetting The Present over two, week long stints in the studio, with a fortnight or so gap in between. The producer, Tony Doogan, gave us the rough Pro Tools sessions from the first week so that we could spend the interim period recording additional material. I was set up in my front room doing some overdubs and wanted to add some percussion. All of my shakers and tambourines and whatnot were in our rehearsal space, but I spied the bicycle in the corner of the room. Taking a pencil to the spokes and mic'ing up the free-wheeling chain and pedals I was able to repurpose the Shopper into a mean green rhythm machine. The icing on the cake was discovering that the bike's lovely old bell was pitched exactly in tune with the song I was working on.

Now that Remember Remember is a full band there is less of a necessity for improvised instruments. I would never want this process to be seen as a gimmick, or something thrown into the music because people were expecting it. However taking a non-musical object from the real world and repurposing it into a musical context provides a certain texture and character that is at the heart of Remember Remember's music. I am more selective now about when to use this approach and do so when found sounds find a harmonious home alongside the sound of the band and our 'real' instruments.

Forgetting The Present is out this week via Rock Action. 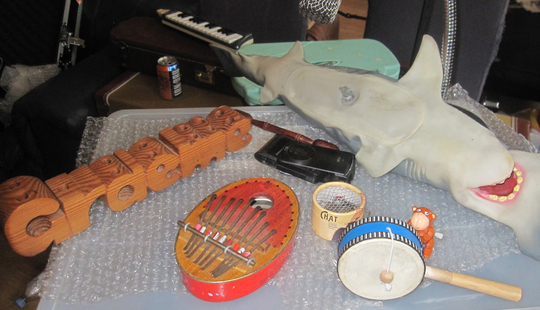