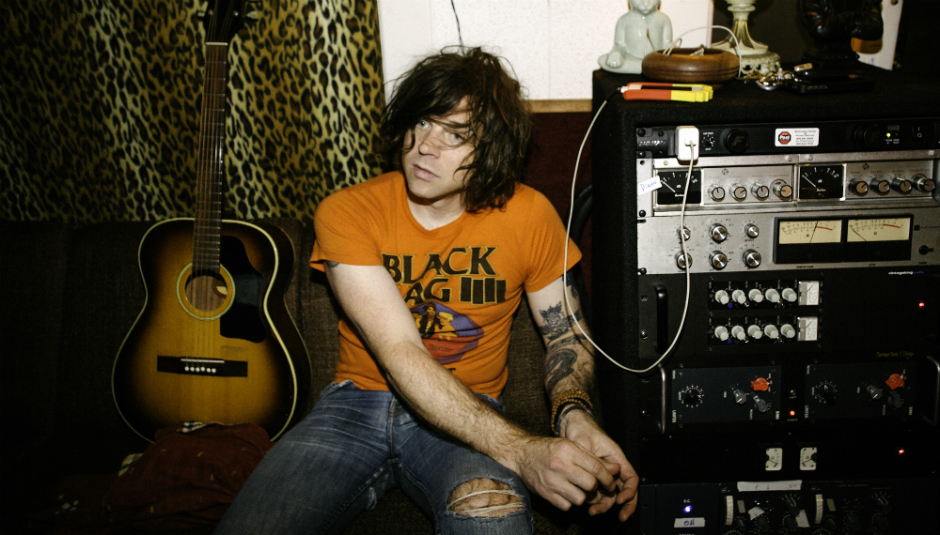 Ryan Adams is talking, at length, about tea.

“I drink Yorkshire Gold at night. I have PG Tips in the morning. I don’t want something that punches me in the brain when I first get up. I mean, I like Yorkshire Gold a lot, but it’s also a bit peppery so it’s a little harsher for your throat if you’re a singer. It’s different if you have it later in the evening, I don't know why.”

It turns out Ryan, who this week releases his 16th studio record Prisoner and is unfathomably lovely for a man who has been Converse-deep in promo for two weeks, has got a real thing for the Brits. “I’m definitely an Anglophile,” he declares, which perhaps isn’t surprising when you consider he’s spent nearly half of his 42 years regularly visiting the country.

He lived here with a girl for a year in the early 00s, a relationship that inspired 2004’s Love Is Hell record, and England was the first foreign territory (along with Sweden and Norway) he toured for his alt-country progenitor album Heartbreaker. He traversed the country by rail, and fondly rattles off the names of the perhaps less obvious places he visited during his foolish years. “Wolverhampton, Leicester, Nottingham, Cambridge. In England you have to have your shit together, especially if you’re a solo musician. England made me a better musician.”

These shores are also home to his beloved Smiths, and the mention of Manchester sets him off on what you might dramatically term a voyage of indie-pattered whimsy. “I do have very romantic notions about the north of England. I grew up listening to The Smiths and they were so important to me. My mind became a completely different escape to my life in North Carolina [where he grew up with his grandparents]; the way Morrissey talks about Manchester, the geography, the buildings, all that stuff his music made me see before I could use the internet. It made me think: ‘Oh my gosh, what is this strange, beautiful world?’”

He forged an even more tangible link to the city through his cover of Oasis’ ‘Wonderwall’, (also on Love Is Hell ); the spare, haunted interpretation was many casual music fan’s introduction to Ryan, and unearthed depths to a song regarded by many as Britpop’s commercial nadir. “That’s one of the reasons I recorded it. I was like: ‘You drove past this song, it’s so great.’”

I then give him the true Anglophile test, asking if he prefers Oasis or Blur, and he briefly betrays that American heritage. “I didn't have the same exposure to Blur that I did to Oasis; Blur felt like a band more synonymous with England. I like a certain type of guitar and a certain drive in the chorus, so I was drawn to Oasis. But you can like them both, right? I’m not going to fly back home and get the questionnaire asking ‘What countries did you travel to? Do you have any illegal items on you? Oh, and also: who do you prefer? Oasis or Blur?’”

We are, of course, nominally here to talk about his new record Prisoner; a searingly personal album that was written in the aftermath of his divorce from wife Mandy Moore. Whilst the record is ultimately imbued with a Springsteenian strain of pensive hope, you could pick any number of lyrics and trace a man going through the discombobulating experience of separation. This one, from ‘Shiver and Shake’, boots the gut as keenly as anything in his extensive catalogue: “I close my eyes, I see you with some guy / Laughing like you never knew I was alive.”

For a man who’s worn his heart on the page for two decades – and for whom many people will conspire to find reflections of his experiences in their own – does he ever think about how fans will unpick his work down the line?

“No, I can’t. I can’t get into that. It might be nice to pretend that I did. The thing is, even when I was younger and I had a full-time other job, I didn’t ever think too much about what I was doing. I did it because it made me happy.”

It’s not an issue that was a concern for his last release; the song-by-song cover of Taylor Swift’s now-seminal 1989 album that was the subject of a baffling torrent of think-pieces analyzing the significance of him supposedly mansplaining the album for the sensitive indie rock fan.

“The first thing to say is that Taylor Swift is an extraordinary songwriter, and I’m just a guy that recorded her songs. But people talked about it more than I expected. You know, the album took a week and it was done with a few of my buddies in the studio. We did one TV interview for it [The Today Show]. If I had covered Black Flag, Discharge, or The Germs and made it acoustic, we would not have had the same conversation. This seems strange to me.” The atmosphere is just a little cooler now, which is only noticeable because it’s been so unseasonably warm up to this point.

The Ryan / Taylor narrative got another facet when Father John Misty recorded a mickey-taking cover of Swift’s ‘Blank Space’, done in the style of The Velvet Underground, with Misty then calling Adams’ cover album a ‘grotesque stunt’. How did he feel about that?

“To be honest…I didn’t really care. I know he called it a disgusting statement, or whatever, but I just didn’t listen. It was kind of weird because Todd, who plays guitar with me, knows him very well and he [Father John aka Josh Tillman] is nice to my face and knows we do all kind of shit down my studio; that it’s a free zone. I totally understand if people want to diss my music, but is it really something to protest about? I don’t know. He’s clearly super talented but at the end of the day… this is a dark fucking planet and playing music should be an escape from all the bad shit going on.”

And with that, Ryan has to go. “I’ve got to feed my cats [he has two- Agnes and Vincent], then I’ve got a ten-hour rehearsal! We’re coming to England soon and it’s gonna be fuckin’ dreamy. I’ve been doing this music shit for a long time and I'm starting to be able to do what I want!” He hangs up the phone with a hundred breathless goodbyes – those good vibes are back again – and I head to the kitchen for a cup of Yorkshire Gold.