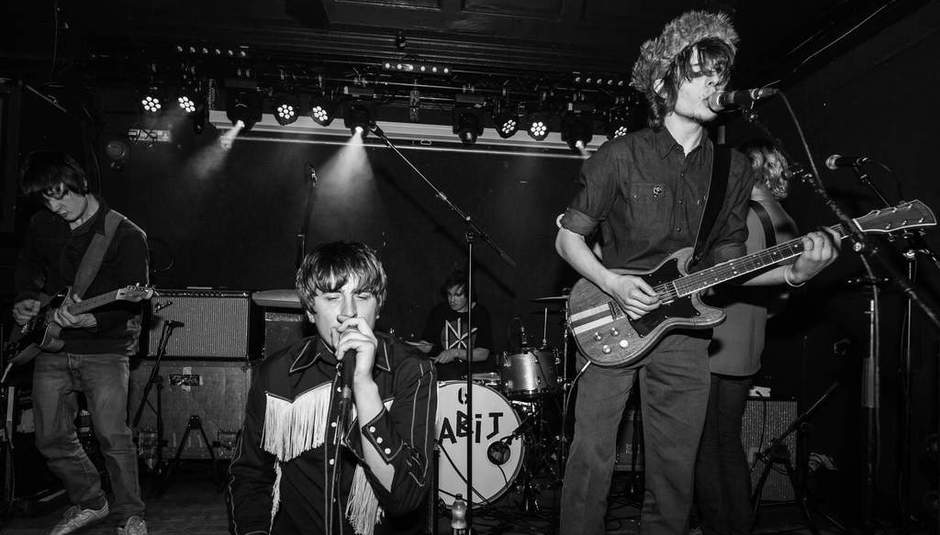 It's difficult to remember the last time a UK guitar band elicited such a wave of anticipation and excitement, but right now Cabbage are the hottest live ticket in the land. Within weeks of announcing their first headline tour of 2017, all but one of the twenty-one dates had sold out well in advance. Indeed, the demand to see this band is so high right now they've added three huge summer dates at London's Scala, Birmingham Institute, and Manchester Ritz to an already busy schedule that is set to see them take in pretty much every festival at home and abroad if a slot becomes available.

But then that's been Cabbage's ethos from the start. Play as many shows as possible and the rewards will come. Not since the early 1990s when bands like Mega City Four and the Senseless Things would spend almost entire years travelling up and down the land in transit vans has a band put themselves out there so much. In these times where everything is branded, marketed and sold as an online commodity, it's refreshing to see a band's reputation enhanced strictly by word of mouth due to their often incendiary and always unforgettable live performances.

Tonight, as with the other shows DiS has witnessed on this tour, tickets are going outside the venue for up to five times the face value, which is both encouraging and disheartening in equal measures. Encouraging that there's a rabid appetite once more amongst the general public to watch live music, disheartening that the parasitic armchair capitalists who prey on society want their share of the profits too. For a band as outspoken as Cabbage - their recent online tirade against The Sun newspaper being just one instance highlighting the band's social awareness in recent months - you don't need to be a rocket scientist to gauge their disapproval of such practices. Behind the merchandise stand they're selling a t-shirt emblazoned with the slogan "Born In The NHS". It's a lyric taken from their song 'Necroflat In The Palace', fast becoming the band's unofficial anthem, especially as 'Free Steven Avery (Wrong America)', the song that wishes death on Donald Trump and ended their shows last year, is absent from the setlist this time around.

What's also worth noting is the demographic Cabbage seem to be attracting, which ranges anywhere and everywhere from 16-year-old kids dying to tell their friends about this hot new band to 60-year-old punks in faded Clash t-shirts reliving the polemic period of their youth. Club Cabbage being all inclusive rather than exclusive makes for a communal experience, and even long after the show has ended guitarist Joe Martin can be found chatting to fans and posing for photos. Indeed there are no airs and graces with this band which is just as well as their forty-five-minute set elicits one of the sweatiest moshpits the Bodega has seen in a long time.

It would be harsh in the extreme to criticise Cabbage at this present moment in time, yet they're still to translate the energy and intensity of their live show onto record. So songs like 'Dissonance' and 'Indispensible Pencil' which open the set in furious fashion take on a whole new lease of life compared to their recorded counterparts. Echoes of the Dead Kennedys or fellow Mancunians from back in the day Slaughter & The Dogs can be heard in Lee Broadbent's vocal delivery while the rest of the band crank things up (really high) around him.

Joe Martin takes over lead vocals for 'Terrorist Synthesizer' which also takes on a new form, this time being that of a call-and-response terrace chant, particularly the chorus which is bellowed back word for word by all and sundry. Martin continues as frontman for the public school bashing 'Dinner Lady' and loses his shirt in the process, while 'Uber-Capitalist Death Trade' sees Broadbent and Cabbage return to doing vitriolic punk rock at its most brutal. 'Grim Up North Korea' provides a brief respite from the fast and furious thrash demonstrated on most of the set before 'Necroflat In The Palace' and THAT chorus ramp things up again to boiling point.

New song 'Gibraltar Ape' has been debuted on this tour, and while it probably doesn't fare as well as the other nine songs this evening due to a lack of familiarity, it's Fall-go-glam stomp will no doubt be a focal point of Cabbage's set come the summer. Closing with a rousing rendition of 'Kevin' off their first EP Le Chou, its riotous tones preceded by 'Fickle''s gratuitous tongue lashing that comes on like a northern Fat White Family battling with the ghosts of Fall line ups past.

There's no encore, no 'Tell Me Lies About Manchester' or the aforementioned 'Free Steven Avery', yet judging by the congratulatory hugs given to each band member as they struggle to get out the venue after, no disappointed souls in the audience either. For Cabbage, this is only the start of what promises to be an enjoyable and successful journey. Where it will take them is anyone's guess but one thing you can bet your bottom dollar on is their next visit to Nottingham will be in a room at least twice the size of this.

The unstoppable rise of Cabbage continues.

The Friday Fangasm: The Woods by Slea...

A Cold Weekend in Hull: The Return of...