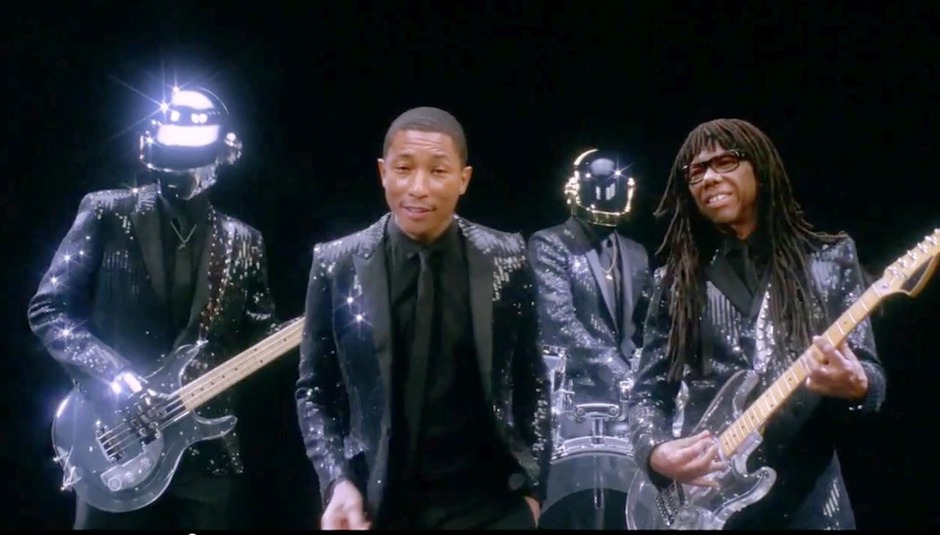 Hello. Welcome to Drowned In Sound's weekly digest of the best tracks to be released over the past seven days. On Friday, I was feeling a bit sorry for all the bands who weren't Daft Punk (who had recently shoved out a song for you to listen to). Then I realised that Savages, Snakehips, Big Deal and several others had also unveiled some sublime offerings. Obviously, Daft Punk got Single of the Week but it was a close-run thing.

There must have been a point between Human After All and Random Access Memories when Daft Punk thought, ‘Sod this robot shit.’

The burden of expectation Guy-Manuel de Homem-Christo and Thomas Bangalter have built for themselves requires an unparalleled level of detail; one that’s completely out of whack with an era where popstars release an album per year that’s drawn from 24 hour recording workshops. Songwriting is hard enough when you don’t have to ensure each note sounds at home on the Starship Enterprise’s inflight jukebox. Why persist with the shiny helmets, ‘secret identities’ and an obligatory use of vocoder when everyone else goes platinum without them?

‘Get Lucky’ is a soothing, grooving, funky-fresh infusion of old-time boogie to silence such rude allusions. In other words, it’s fucking amazing.

In all likelihood, you’ll have heard its Nile Rodgers-penned hook last month after it was premiered during the Saturday Night Live ad break. The deluge of subsequent Vines, dodgy YouTube clips and fan-made fakes have only served to distract from what’s now clear: Daft Punk showed their trump card weeks ago.

There’s an elegant dab of house piano added to the mix and Pharrell Williams sounds like he could falsetto the undergarments off Mother Teresa but, really, ‘Get Lucky’ revolves around its riff. Like Justin Timberlake’s ‘Suit & Tie’, it's a song that’s immensely relaxed about resting its fortunes on one sound. While Timberlake embellished his echoing cowbell with a Jay-Z guest verse, Daft Punk engage in no such frivolities.

Their first proper single since 2006 could well have been released in 1977, when Chic put out their first album and Star Wars unleashed the world’s appetite for science fiction. It's dance music with a futuristic bent rather than the future of dance music. An origin story for Daft Punk’s own mythology that shows where their human ends, their cyborg begins and why they persevered with both.

There is something deeply amusing about the fact that Savages share a song title with Black Eyed Peas and Blink-182. This unintended comedy is underlined by the spoken word introduction to ‘Shut Up’s promo video, which is po-faced beyond belief.

And yet... the more I experience of Jehnny Beth’s wretched world of cyclical suppression, the more convinced I am that it’s not a well-executed art project... Underlining every crashing snare drum and feral guitar lick is an incorrigible belief that Savages are the last gang in town kicking up an almighty fuss because no one else will. Since this message is conveyed in a combative wail of hysteria, ‘Shut Up’ provokes you into a reaction. While there’s subtlety in the way it climaxes without an untamed outpouring of aggression, the song’s ‘us against the world’ self-righteousness could not be more obvious.

To truly invest in Savages, a leap of faith is required from snide derision to ultra-austere fury. Right now, I’m making the jump.

Snakehips - On & On (self-released)

These are halcyon days for R&B. The last time we had things this good, Kelis was repeatedly having to define her ‘milkshake’ in interviews and Nelly was attempting to get it on with one of Destiny’s Child.

Another name to add to the current list of sensual talent that includes Miguel, Jessie Ware and Frank Ocean is George Maple. She’s been doing aloof, digital-soul since November last year and this latest collaboration with London-based production duo Snakehips is a shared triumph. Veering between slinking desire and a swell of glitchy magnificence, ‘On & On’ will have you intoxicated from the moment it spirals into a kaleidoscope chorus of lovestruck bliss. Aaliyah would approve.

Big Deal arrived in 2010 as a distinct but familiar duo. Songs like ‘Chair’ and ‘Talk’ transplanted grunge’s classic quiet-loud dynamic into a semi-acoustic wasteland of unspoken emotions.

That was then. Now Alice Costelloe and Kacey Underwood have gone fully electric, first on the teaser track ‘teradactol’ and again on their proper new single ‘In Your Car’. Amps may have been turned up but hesitant affections remain in mercifully high supply, so much of what made Big Deal such an endearing prospect is still in evidence. This time around you’ll be moshing along to their sighing, intertwined vocals instead of slouched in your bedroom with a face full of woe.

Empire of the Sun originally found fame as the less edgy MGMT, who wore silly costumes instead of stating their intention to get loaded on heroin and collect STDs like Pokémon cards. They didn’t try so hard to be hip or ‘significant’ and still wrote electro-pop songs that lit up the Radio 1 playlist for months on end. That both bands released the first tasters from their forthcoming albums this week is pure coincidence but it’s hard not to read into the cosmic significance.

MGMT’s ‘Alien Days’ follows on from the intelligent, experimental and really quite boring Congratulations in being something that I have no intention of listening to ever again. Empire of the Sun’s ‘Alive’ is moronic, generic and twice as catchy as ebola; I am listening to it again right now. The moral of this story: catchy wins every time.

Camera Obscura - Do It Again (4AD)

Camera Obscura return with a song that wears its Glaswegian indie roots like a hand-knitted jumper embossed with the lyrics to Orange Juice’s ‘Rip It Up’. It’s wistful, melodic and oozing with enough heartfelt sentiment to whip you off your feet in a half-awkward, half-elegant embrace. “You were insatiable. I was more than capable,” is the kind of mantra all hopeless romantics can get onboard with.

Royal Trux and Crystal Castles walk into a bar, get sloshed on absinthe and cross-pollinate: Tempers walk out. ‘Strange Harvest’ is their second single to date and throbs with lethal intent. Its shoegaze undertones are balanced on a knife-edge against a pitch black abyss of gothic synth, peering into its atmospheric churn is an unnerving but thoroughly exhilarating experience.

“I'm sure most DiS readers will hate it, but you never know!..."