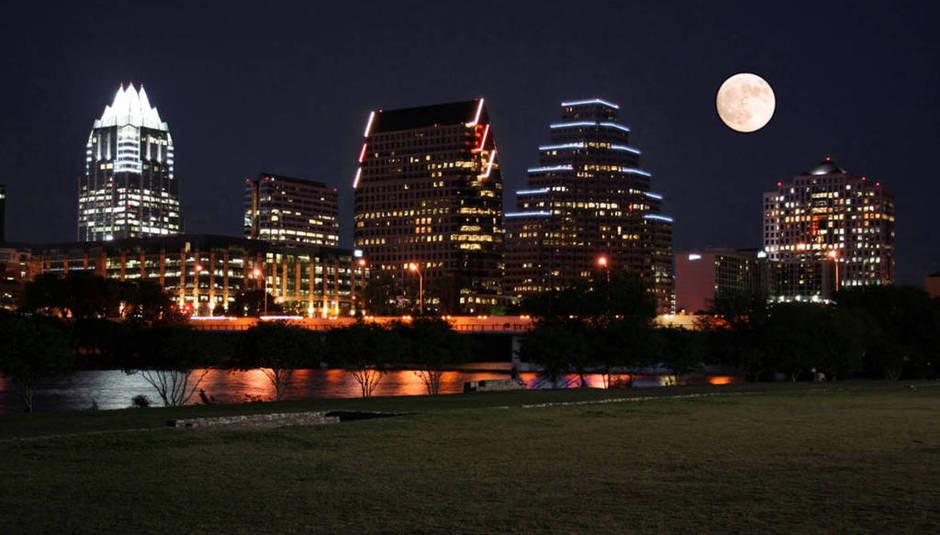 DiS went to Austin for South by Southwest Music festival come conference, again this year. We fully intended to tell you all about the upcoming hypes'n'trends for 2007 but when the wonderfully talented Adam Gnade offered to write a piece for us we happily went off and got drunk with Metric and Martha Wainwright and left him to it. Little did we know he'd get twice as drunk and find five times as much fun!

This is his story...

From atop the Omni Hotel, at the open-air pool patio 22 stories above downtown Austin, all the bands playing and BBQ grills smoking and cars and taxis and buses hushing below adds up to a placid, soft, sweet-smelling drone that rumbles along like a dozen summer pool parties as heard from a mile away. It's sound and smell blurred until sensations and sensory melt into each other, and until the wind brings with it its own kind of music.

Down on the street it's wet and slate gray and humid. The cars have their lights on and their wipers beating back and forth, and everyone walks slower than they did on Wednesday - when free parties and free booze turned the night frenzied with impending self-destruction, wanton pleasure seeking and trouble-making. It would be unfair to call it decadent, because Texas isn't a decadent place, and week-long music industry festivals are too self-conscious (not to mention PR- and product-conscious) to really let go, but it's close and let's be reductive and go with it: decadent, nights here are decadent. They end in overripe chaos (good chaos usually) and mornings are minor desolation. (A friend said one night, "This room is almost trashed." Easy desolation. Bush-league horseplay.)

Highlights of the last few days are as follows: Tuesday at bars with Austin friends; milkbucket-size mixed drinks served by a cast member of a TV show about the roller derby. (As someone that doesn't watch much TV, I'm just repeating this; the idea of a show about the roller derby makes me gutsick.) Wednesday: Emo's Annex watching Castanets, Wooden Wand, My Brightest Diamond, and Why?, before meeting up with my friend Jenna, where her band, The Kingdom, had just played their showcase. We spent a few minutes watching Talkdemonic bulge out murderous viola and drum swells, then stumbled into an after-party where Echo and the Bunnymen played a sloppy but perfect set and, later, the singer from Towers of London tried to lure us into a cab for a party across town. Thursday was spent dog-paddling in a whiskey bottle with Ray from Castanets and Red from Peter and the Wolf, looking for new bands and running into Kris Kristofferson's set at La Zona Rosa, a Kristofferson who has aged well and now sings in a low, cracked warble over dark, brooding country music. (The rest of that night was savage and strange and involved setting off a stolen fire extinguisher in a crowded park, and trouble from surly bouncers.)

Friday was the big show day: Peter and the Wolf playing beautifully complicated (but simple still) folk music at the first half of the Whiskey and Apples showcase; Frog Eyes tearing a deep, wide swath out of the Austin skyline with desperation, distressed abandon, and righteously urgent guitar playing; another My Brightest Diamond show where Shara's (from Sufjan Stevens' Michigan Militia) music finally clicked and made sense to me and became great unlike the Tori Amos guitar rock (not my words) I thought it was on Wednesday. (And what a VOICE! The best parts in Illinois are all hers. She lands on the thing like a giant, prehistoric bird.)

Then it was awful indie-rock bands at the Fader party that made us hightail it outta there, leaving behind good free drinks and friends. (The same conversation happened there with Pall from Black Heart Procession. "You were gonna play with Ray?" "Yeah, at the Whiskey and Apples showcase but they called off the last half of it." "What's your band name?" "It's called... it's named after... my name.") After that, fireworks reflected in great colourful blooming blossoms in the glass buildings downtown, sucking down shots at Howard Hello's set, then Jana Hunter around midnight, in an empty bar across town. After Jana's amazing set, with all my friends in different corners of the city, I split and walked alone through Austin, looking at all the blurring yellow and orange and red lights and drunk, slack-faced kids, teetering dizzy and gone-eyed in the street. Dead sober, for once, it was all gloom and weird lust and excess as seen from the other side. A dozen thoughts pin-balling in my skull... the biggest of those, after meeting Jana's big family, being the feeling of lost opportunity - a lost opportunity I never had a chance to do anything about. Born an only child. No chance to do great things like tour with your brother, or have your sisters watch you play. Jana's family... amazing people. I felt jealous, and off-kilter. And more so, I was filled with love for them, and for a life I couldn't lead.

Earlier that week, on the plane ride over from Portland, I ran into Jenna at a Phoenix, Arizona airport bar and she said, "Adam, just think of all the shows you're going to MISS!" It was funny at the time, and it's still funny, but there's a bit of sting to it now. Jolie Holland, the Black Heart Procession, Lavender Diamond, Pink Mountaintops, An Albatross, Drive-By Truckers, Marissa Nadler, Phosphorescent, Death Vessel, Thurston Moore, Scout Niblett... the list of missed music is heavy, and after so many hours running wild and screaming and narrowly missing death and kissing whiskey bottles, it's kind of a bummer.

But Saturday afternoon, now, awaits and my plans are big and ambitious. Still, from what I've seen so far these plans are all mice and men stuff, and it's better, I think, to get loose and sloppy and find some good friends and see what happens.

I came here on a whim with no plans and no agenda or prospects, and why impose on that? Why push your fist into a keyhole? My one chance to play missed, why not just embrace chaos and step - fully now - into the fray? Saturday was the big night for shows.

Caught Dirty Projectors' last song, then Spencer Kingman's set, at Mrs. Bea's - where they served pork tacos and hot dogs from steam tables and foam coolers out front - family picnic style. (So family-style, actually, that they gave Red a free meal - and insisted upon it - when they found out he was broke.)

From there we went on the search for free booze and didn't find it but we added more friends to our crew at every club (at one point we rolled 20 deep) until we sprawled out across a city block and couldn't get anywhere but had a good time trying.

Bands: DMBQ looked like coke-haggard spiders and tore through heavy, energetic, wild-eyed guitar rock while hanging from the rafters and downing beers handed out from the crowd. Dmonstrations played screeching punk in a parking lot. Gorch Foch played in the rain at the anti-SXSW showcase, Fuck by Fuck Y'all. (The group before them was a psycho hicky blues band which was all dirty acoustic slide guitar joy.) Dungen weren't given enough volume to make their Swedish stoner rock sound like Swedish stoner-rock ("The sound just disappeared up into the trees," said Ray) and came off like a young Jethro Tull - compounded, later, when the singer busted out a flute and got all Renn Fair on us.

The Dungen showcase was an exclusive hipster nightmare where you needed a special cassette tape to get in. The bouncers were bitchy and rude, but we knew there were coolers of free beer inside, and nobody felt bad when a friend gathered tapes from the sympathetic crowd, passed them off to her sister and got us all in. (We also didn't feel bad filling our pockets and bags and purses with cans of free beer and splitting after Dungen's set. We left the show like pirates, and laughed out victory into the night.) Now, 12 hours later, Austin is rainy and hot at noon and full of hungover guys in all black loading amps into vans and bar employees sweeping puke, soggy cigarette butts, and pulpy band flyers into the gutter. (The singer from Towers of London stares up at me, bug-eyed like John Lydon, from a scrap of yellow paper on the concrete, and I laugh out loud and step over him.)

Whole venues are gone - their lights and scaffolding and red-and-white sponsors' banners taken down and long gone in the backs of semi-trucks headed out of the city.

Emo's Annex, which was packed last night with kids and A&R people and popping flashbulbs, is now an empty parking lot with an old man in grey sweats walking his tiny white dog through it. (He stops and pulls a cellphone out of his windbreaker and glares at its screen in the same spot Wooden Wand made so much beauty happen days before.)

Yet SXSW isn't over, officially. There are still bands playing in the steamy windows of bars. The restaurants are still full of schmoozing industry people talking shop over giant neon green margaritas and steak fries. It's just on a smaller scale; little aftershocks after the big quake.

This morning our hotel was filled with bodies and with bottles and cellphones going off under covers and from inside jeans, but as the day moves on, luggage and guitar cases are packed, friends give hugs, final warm beers are sucked down, plans to meet up later in the year are made, plans to lay down tracks, plans for shows and tours, and the end of this whole thing begins.

Soon there won't be much of us left to see Austin become Austin again. Even now the city has an entirely different feel; the vibe of bad behaviour unpunished and of drunken hookups and trashy fun is gone and in its place is a clean, cosmopolitan, distinctly Texan city. It's not the Austin of A&R guys dipping wet fingers into coke baggies, or kids sleeping in hotel bathtubs, or sex heard through hotel walls; it's the Austin of tourist board commercials, of hotel brochures, which is dead opposite to the great, loud, ruined mess of this past week. ('Mess' said, of course, with nothing but love in my heart.)

My plane leaves at 8am tomorrow morning so I'm sure I'll see the city lose all signs of SXSW - which is a sad thought whilst walking alone down 6th street on a Sunday morning. You can personify and assign issues of mortality to things like this, or you can crack open another Lonestar and look for whatever remaining fun you can find.

It's a decision more important than you might think.

For more words and music from Adam Gnade, visit adamgnade.com 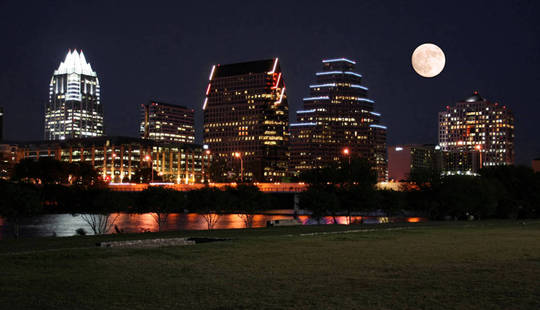