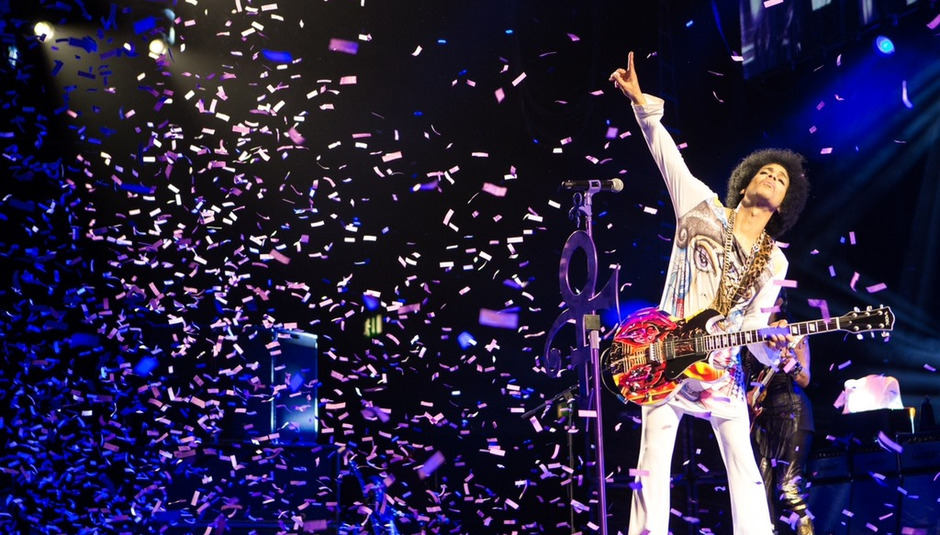 I didn’t catch Prince when he was last in Manchester, a couple of months ago; I was across town at a St. Vincent show on the first night, and I can’t quite remember where on the second. He was playing at the 2,500-capacity Academy, though, and it did have me wondering what it was that made it quite so weird that somebody of his (metaphorical) stature was showing up at venues of that size (and smaller ones in London, of course).

The Stones, for example, I could picture seeing anywhere. Strip away the celebrity, and they’re a blues-tinged rock and roll band, as easy to envisage in a tiny club as commanding the stadia the tend to frequent. Perhaps it's the sound, instead, that’s important; for better or worse, the likes of Arcade Fire, Coldplay and - most egregiously - U2 have now spent years writing songs specifically for cavernous rooms and vast fields, and accordingly it’d probably be fairly awkward if they were to turn up at the 100 Club. After tonight’s two-and-a-half hour set draws to a close, though, there’s only one really obvious reason that springs to mind as to why seeing Prince play an arena feels more appropriate than somewhere a tenth of the size; when somebody - anybody - is putting on a performance of this calibre, it’d feel like sacrilege if the audience wasn’t huge.

He’s supposed to be on at eight o’clock, but turns up nearer half past; given that the arena is less than half full at the allotted time, I can only assume most of the crowd was better informed than I. There’s an awkward little introduction as 3RDEYEGIRL shuffle onto the stage - house lights still up - to request no photography or video for the sake of ‘enjoying the experience together’, or whatever; fine by me, but a frankly terrifying member of the security team - immaculately suited-and-booted - stands at the front of the stage making cut-throat gestures at anybody he spots falling foul of the rules. Later, the in-house team take over, and succeed in being ten times more irritating than people taking shitty pictures on their iPhones.

I suspect there’s another article in that, though, and the real focus is on Prince; specifically, on Prince the performer as opposed to Prince the musician. He is, put simply, completely spell-binding. I’d love to know how much ground he covers during the course of the average gig (if there’s such a thing for him), because the sheer force of his energy throughout is apparently irrepressible. He bounds across the stage, guitar apparently welded to him, on opener ‘Let’s Go Crazy’; on early big hitters ‘Raspberry Beret’ and ‘Kiss’, meanwhile, his strut is flawless. When he drops new cut ‘FUNKNROLL’, his limbs pop about improbably, as he channels that same erratic, almost other-worldly agility that is most readily associated with Michael Jackson. He is 55 years old.

The thing is, so engrossing is he as a showman, you almost have to force yourself to focus on the fact that he is one of the most preternaturally gifted popular musicians in recorded history. It’s mighty impressive that, at 70, Mick Jagger is still dancing in almost aggressively sprightly fashion, but Prince manages that same degree of athleticism whilst simultaneously tearing through freewheeling guitar solos; ‘She’s Always in My Hair’ is a case in point, of course, as is ‘Take Me with U’. By the time he drops Purple Rain deep cut ‘Something in the Water (Does Not Compute)’, you’re finding yourself having the ridiculous revelation that he has a terrific pop voice - you can’t help but feel, when he asks the audience to handle the haunting refrain, that they’d rather just leave it to him.

It’s a testament to the strength and diversity of his writing, really; he is pop music’s great chameleon. For now, it seems, his work with 3RDEYEGIRL is leading him into guitar-drenched funk territory, and tonight’s spectacle is certainly none the worse for it - even if he does cram most of the new cuts into the setlist’s middle portion. The band themselves are on scintillating form - guitarist Donna Gratis, in particular, matches her boss all the way, and has no qualms whatsoever about taking the lead on ‘Plectrum Electrum’. Only the most naive observer wouldn’t wonder whether there was a touch of the Bowie effect about the crowd’s rapturous response to the fresh material - like his English contemporary, Prince spent years turning out records that met with a lukewarm reception (tabloid covermounts Planet Earth and 20Ten, anybody?) - but there’s evidently more than just a few years’ absence making the heart grow fonder here; 3RDEYEGIRL are slick, sharp, and have apparently rejuvenated Prince to the degree that Plectrum Electrum might well turn out to be his The Next Day.

Everything leading up to the encore serves as a timely reminder of what the modern purpose of the ritual has come to be; god knows Prince deserves a couple of minutes rest after two hours of such awesome physicality. He’s back before you can blink, though, and he rattles off the classics with an almost brutal lack of regard for the audience’s need to draw breath. ‘I Could Never Take the Place of Your Man’? Check. A fabulously groovy reinterpretation of ‘Paisley Park’? Yep. The unbridled work of pop genius that is ‘1999’? That too. We all see artists, all the time, play songs that are only a few years old like they’re a massive fucking chore; Prince relays these decades-matured vintages with a gleeful abandon that really sums up why this is the greatest live performance I’ve borne witness to in a very long time.

It isn’t just that Prince is awesomely athletic, prodigiously talented, and gloriously confident in front of so many people. It’s that he treats his music - and by extension, the crowd - with such an incredible generosity of spirit; unlike so many other artists of his prominence, he has a heart. When he closes with ‘Purple Rain’, he fucking means it; there’s karaoke singers half his age already sick of that song, and yet he takes great pleasure in reminding us that it’s not a ballad - it’s a soul song. After every track during the encore, he’s effusive in his gratitude to the crowd, as if he’s about to depart - but he doesn’t. In fact, he didn’t really need to keep saying it; it’s plainly obvious that, for Prince, mutual performer-audience appreciation isn’t something that should be refined to late-evening pleasantries for convention’s sake. Instead, it’s something that permeates every second of the time he spends on stage tonight; a labour of smoke, glitter, flamboyance and - most crucially - love.