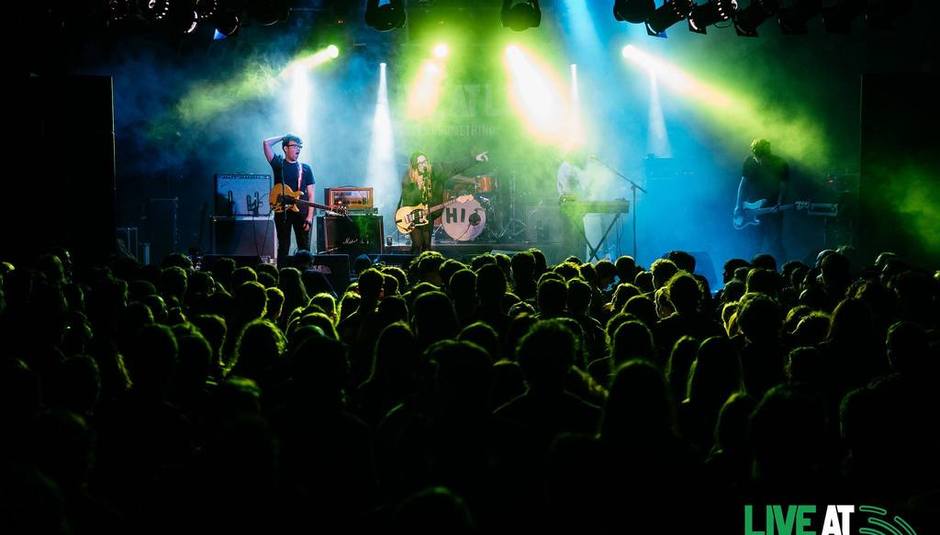 From Raketkanon to Thurston Moore: Live at Leeds 2015

From Raketkanon to Thurston Moore: Live at Leeds 2015

If you suffer from the condition known as FoMO (fear of missing out), then Live at Leeds may not be for you. With twenty venues hosting all-day line-ups, it’s hard to suppress the niggling distraction that, however good the act you’re currently watching are, elsewhere in the city another group may be playing the greatest festival set since Kurt Cobain rolled up in a wheelchair and then fell over.

Even so, I’m fairly confident I’m in the right place at the right time when Belgian nutcases Raketkanon take the stage at the Brudenell Social Club. Before they start, their drummer wanders around the venue, shaking people’s hands and thanking them for coming, his mild-mannered politeness contrasting somewhat with the abrasive, uncompromising ‘raket’ he subsequently unleashes. His drumming style has a bruising Shellac-like minimalism, furnished with the occasional more showy machine-gun roll. The suitably hairy guitarist is in charge of downtuned riffs while another member produces the bass, keys and bonkers electro effects with a single little synthesiser. With a blonde-haired singer resembling a young Jonny Lee Miller screaming over the top, they’re like a slower Refused. And you’ve got to love a band whose guitarist jumps offstage in the middle of a song to play his massive riffs from the middle of the crowd - especially when he’s followed by the drummer! In fact, each member spends at least some of the set among the audience; the person leading the handclaps and waving a lighter for the quiet intro to one number turns out to be the keyboard player. They’re funny lads, too: “We have two more songs. One will be the first song. The other will be the second song. But we’re gonna start with the second song, so it might get confusing...”

It’s a hard act to follow and after a long soundcheck Russia’s Pinkshinyultrablast seem far less radical. They appear to be playing the same groovy 6-minute neo-shoegaze number with ethereal vocals over and over again. Pussy Riot, it ain’t. Still, the man two places down from me in the urinal afterwards is enthusing about them. “A lot of shoegazey stuff can be very dark and depressing,” he broadcasts to strangers who might rather wee in silence, “but that was actually really uplifting.”

After the relative lightly-sozzled toilet-chat civility of the Brudenell, Leeds Beckett University is like entering the seventh circle of student union hell. The bar is rammed, the clientele’s eyes glazed by alcohol (or maybe stronger substances) and, because the venue serves food within its own walls, the bins are overflowing, the tables piled and the floors littered with discarded polystyrene burger boxes. Then you pass the kind of juvenile music fan who says, and I quote, “when we went to All Tomorrow’s Parties, I only saw three bands.” Sigh. At least there’s minimal conversation in the gents, perhaps because most people are too busy ensuring their legs don’t give way mid-piss.

Menace Beach are one of those Yorkshire bands who’ve discovered the American indie rock scene of two decades ago to such an extent that if you bumped into the lead singer at a 90s-themed fancy-dress party, you’d go, “have you come as Mascis or Dando?” And he’d go, “both”. Playing to a packed-out main-stage auditorium, they’re at their strongest when Liza Violet’s vocals become more dominant or when she’s adding extra texture by moving off guitar and onto keyboards. It has to be said that they lack The Lemonheads’ gorgeous melodies and Dinosaur Jr’s loud shredding. And Dinosaur Jr’s melodies, for that matter. They’re still charming, though, in a nostalgic kind of way.

After a succession of interminable soundchecks, Beckett’s second stage eventually runs almost an hour over schedule... Now I’m no sound technician but can we put a legal cap on soundcheck duration? If you haven’t got enough indie tambourine in your monitor by a certain cut-off point then, sorry, but you’ll just have to crack on with it and overcome any further problems mid-set. I mean, I don’t want to bang on about it all over again but last year the Fat White Family shambled on, launched into their first song, went “right, that was our soundcheck” and got the fuck on with it.

Yak’s soundcheck seems to go on for days but at least involves the rhythm section doing a rendition of ‘Blindness’ by The Fall, which is a good sign. When the set does get going, the bass and drums provide strong, solid backing to The Oli Burslem Show, as the frontman hacks at his guitar to spikily psychedelic effect, drawls like Morrison, screams like a man being tortured (but who quite enjoys it) and bashes at the organ while grinning like the lovechild of Batman’s The Joker and Jurassic Park’s The Dilophosaurus. He heaves that organ into his arms and runs around with it for a bit. He plays guitar while standing on one of the drums. Towards the end, he even dismantles most of the drumkit, hurling various pieces to the other side of the stage, declaring “you don’t need that” to his drummer who carries on regardless, completely unfazed. He’s probably used to such lead-singer shenanigans, the patient bugger.

Yak’s set is far more exciting than Rat Boy’s, yet it is Rat Boy who incites an actual stage invasion from the yoof of today. But then he does sing about Wetherspoons and pronounces “society” without a “T”. The new prince of glottal-stop indie-rap infuses jangly guitar ditties with rapid, socially-conscious Essex rhymes. To jaded old me, that sounds about as incendiary as Jamie T, but by golly he’s striking a chord with the hope-deprived youngsters.

Bully’s Alicia Bognanno couldn’t be more effortlessly cool if she was lying on an iceberg sucking on a Fox’s glacier mint. Like Menace Beach, her band’s sound is steeped in 90s US indie-rock but she’s from Nashville so it feels a tad more authentic. It’s catchy fuzz-pop reminiscent of other bands beginning with a ‘B’ such as Best Coast - only Bully are scrappier and cooler than them - or The Breeders - who you can’t really get cooler than, although Bognanno gives it a damn good shot. Her vocals manage to sound simultaneous venomous and nonchalant and her speaking voice is so casually deadpan that she has to assure us that she is not being sarcastic and that, yes, she is genuinely glad to be here. A star is bored born.

“The name of this band is Slade.” My word, Noddy Holder’s lost weight. And grown younger. And taller. And lost the sideburns. And become American. It’s not really Slade, of course. It’s fresh-faced up-and-comers The Thurston Moore Band, here to showcase tunes from “our first LP.” Being the musical bloody genius that he is, Moore’s mere soundcheck is greater than most band’s full sets. Has this bloke ever laid his fingers on a guitar and produced anything less than the kind of shimmering slice of aural elixir that would have Orpheus himself nipping down the pawnshop to swap his dusty old lyre for a Fender Jazzmaster? We disciples could listen to him drawl the words “check, check, check” over feedback for two hours without wanting our money back. Instead, Moore only goes and plays the best concert I’ve seen him do since Sonic Youth toured The Eternal. The lower-standard scrappiness of some of the Chelsea Light Moving shows has been superseded by this new group; a proper, breathtaking rock ‘n’ roll group, the rightful Moore-helmed follow-up to his Sonic Youth glory days. Steve Shelley looks happier than he did before, beaming away from behind the kit. He and bassist Debbie Googe prove a formidable twosome, alternating between Neu-esque motoriks and more complex arrangements, locking down the groove over which Thurston can lay his masterly guitar textures. In this task he is aided by James Sedwards, in whom Moore may have found a comrade to rival his ex-axe partnership with Lee Ranaldo. Just like you could watching Sonic Youth, you can close your eyes during this set and be transported to closest thing guitar noise gets to the amplified clouds of heaven itself.