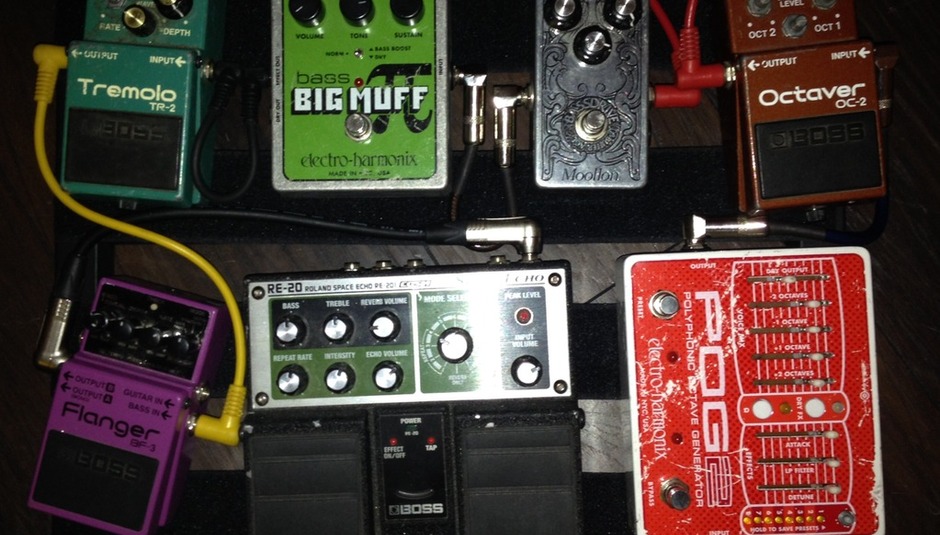 Planet Gear: Polar Bear on the gear behind the sound

Planet Gear: Polar Bear on the gear behind the sound

Planet Gear is an irregular feature on DiS in which we ask musicians to get a bit geeky and talk us through the equipment that makes the 'magic' happen... Ahead of this year's Mercury prize, DiS in partnership with Naim Audio's new wireless music system, mu-so, will help you GoDeeper into 2014's nominated albums. Today, we would like to turn your attention to Polar Bear, who have delved into the secrets behind their unique sound...

For the new album I completely changed my drum kit, as I found that when I listened to the rehearsal recordings of the new music, the sound of my regular kit seemed alien to the new sound world we were creating and I wanted to merge my sounds more with John's (the electronics). Rather than make my sounds electronic I decided to construct my kit out of different sounding drums. Instead of toms I have some little vietnamese drums. I bought these with some money Patti Smith gave me for recording a song with her. Instead of a floor tom I use a bomba leguero which is traditionally used in Argentina and the south of the Brazil. To me it's like having a filtered bass drum, giving me new possibilities for different beats. I also use animal skin on my snare drum meaning all my surfaces are natural skin, this is a warmer and slightly softer sound. They also last a lot longer than plastic heads, on the bass drum though I have an Evans super kick II with a felt beater and calf skin on the back. This gives me a subby, soft but thumpy sound that I love.

For cymbals I had them all custom made by a cymbal maker Matt Nolan. My idea was to have hi hats that sound like they have the top frequencies rolled off and the cymbals to be dark with a fast impact and not much sustain, leaving lots of sonic space for the other instruments. It took us some tries but Matt got the the hi hat sound I wanted by moulding a third cymbal that sits in the bottom hi hat cymbal but with both cymbals touching the top one. The top hi hat is quite thick giving stick definition while also putting rivets into it to make more swish. 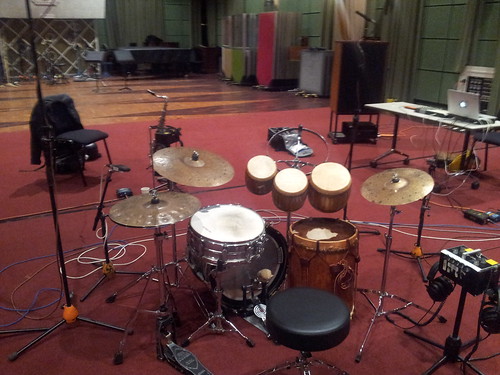 When we made the album I also recorded some effected channels of the drums that i mixed in with the natural mics, One was a distortion pedal from 1973 called a fender blender and I also put them through a backwards/gate effect and a plate reverb. I used the distortion because I really love the sound of the old classical indian recordings which have this really beautiful overdriven quality to them. We use this pedal when we play live too, mixing it in with the natural mics. I have some old RCA ribbon mics that I also used to colour the sound. I also made coloured channels of everyone else's instruments too that I mixed with their direct sounds rather than use plug ins. I wanted to cut between different mics and channels to get more depth and different spaces in the sound of the album.

I made custom software to make the electronic parts that I play on the new Polar Bear Album. It's important that the things I make can be played live and one of the most exciting things about this band is that we play the songs quite differently each time so it's really vital that my sounds can change quickly and respond to the other musicians as well as setting up interesting sonic structures for people to play against. 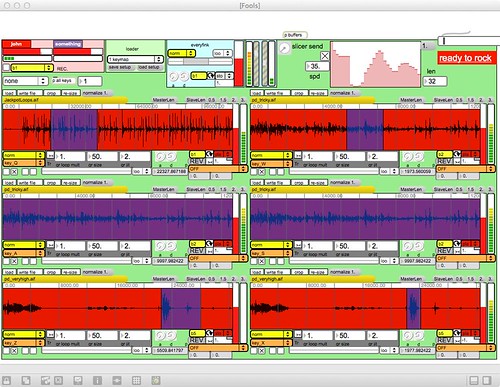 I use Max/MSP which if you don't know is a kind of sonic Lego or Meccano for making sound / video / anything you can imagine. I started using it to play my solo material back in the early 2000's and it's allowed me to do things like control my music using joypads and wii controllers as well as make generative musical sequences and live sampling the musicians I play with. I use an APC40 controller and Launch Pad to control the various Max/MSP patches in real time, though I'm going to try and get rid of the APC40 when we tour Europe next year to make it easier to travel by air. 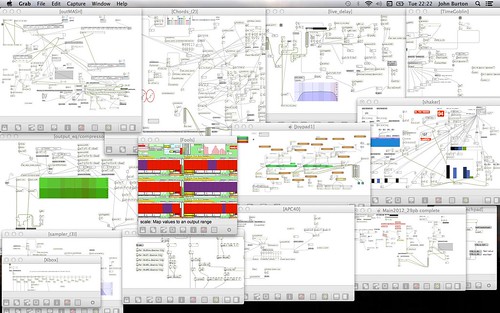 One thing that sets this album apart from other PB material is that I'm often playing rhythm parts, something that I've not really done before but I think it's worked out in a really fascinating way. I used only two samples for most of it, if you look at the 'rhythmic patch' you can see in the top left two buffers, one says Bowl and another Cup, these are the samples I recorded in through my laptop microphone and they are just me hitting some washing up. I was going to use them to test my patch but they ended up complimenting Seb's new drum sound so they remained in their glorious lo-fi splendour. 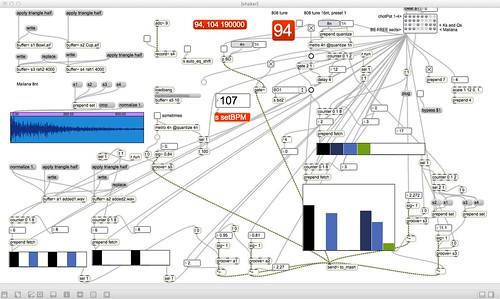 The only software I didn't make for the album was this soft synth called Iris which allows you to layer field recordings and use them as a playable synthesiser. I got a bit obsessed with this for a while and made loads of presets, I made the spacious drone at the start of 'Open See' and the crackly black clouds of 'Life and Life' with Iris, I love it so much. 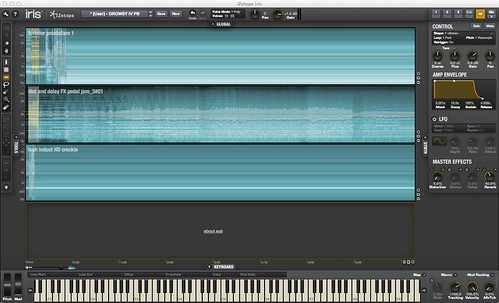 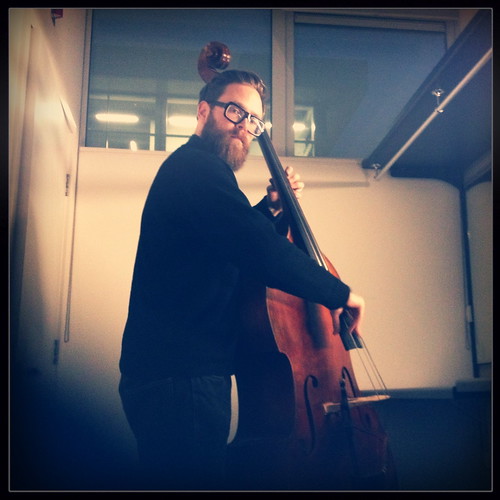 In Polar Bear I play a great piece of vintage analogue gear called a double bass. I bought this one in my first year at music college. It was my first double bass and I've been playing it ever since. It didn't cost very much (for a double bass, at least) and it's made out of plywood, which is a cheaper type of wood than is usually used on most double basses, but there's something about the deep, dark sound of this instrument that I love. Even though I later bought a 'better', far more expensive instrument at the recommendation of my classical bass teacher, this is the one that I always return to. It reminds me that, regardless of cost or someone else's idea of what's good or not, if you think it sounds good, then it sounds good.

Like a lot of double bassists, I've spent a long time trying (and often failing) to make my live sound as natural and acoustic-sounding as possible, but recently, due partly to the frustration (and relative impossibility) of trying to sound acoustic in increasingly loud gig situations and also through the sound and palette of the band evolving, I've started to let go of that need to sound like an 'acoustic' bass. It's been really liberating. A big turning point was beginning to use my Ampeg SVT-VR amp, which previously I'd only used for playing electric bass. It sounds truer to my acoustic sound than I expected, but more importantly, it sounds amazing - warm, rich and punchy and, for the first time, I can actually be heard when it gets loud on stage! I'll get the amp mic'd on gigs and combine that with a DPA 4099 bass mic on the bass itself. I've started trying to avoid DIing the pickup but sometimes an engineer will want to take that as well. In recordings Seb will take all three - amp, DI and mic. Often he'll experiment with the sound, using compression and extra distortion. 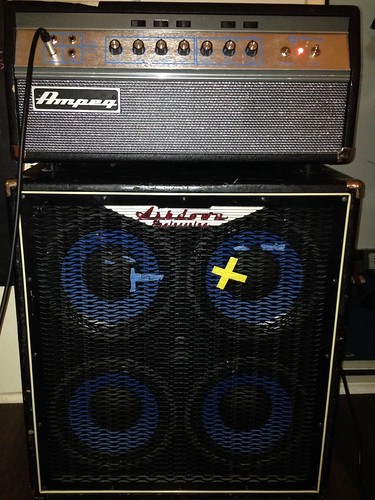 In the last few years I've also started experimenting with putting the bass through effects pedals. For a while I used a Boss RC 30 Loop Station and a Boss RE 20 Space Echo for live gigs. I don't use the loop pedal so much now, but I love using delays. I'm a big fan of Arthur Russell and the way he used delays on his cello, so that influenced me a lot. For 'In Each And Every One' I expanded my pedals to include an Electro Harmonix Pog2 poly-octave pedal, a Boss OC-2 octave pedal, an Electro Harmonix Bass Big Muff fuzz pedal, a Moollon Bass Drive, a Boss Tremelo TR-2 and a Boss BF-3 Flanger. I've experimented with lots of other effects, but generally, if it does't fit the music, then it doesn't stay. The progression to where we're at now has felt very natural. I find it exciting that rather than being an acoustic jazz group with electronics, now it can often be hard to tell who exactly is making what sounds. 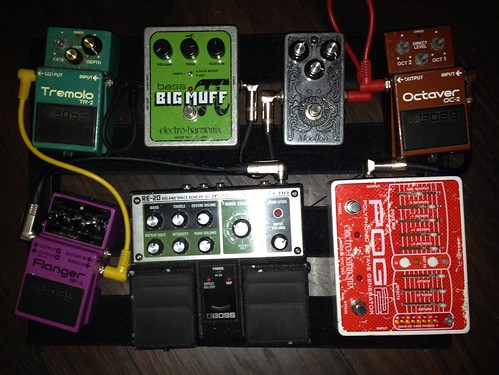 For this album I played a Selmer Super Balanced Action tenor saxophone. Hand made in Paris in 1949 and really very lovely. Mine was an extremely battered and dog-eared version. I speak of it in the past tense because I don't own it any more : I am now playing a 'Red Back' prototype which was made for me by my friend. It's even better than the Selmer - it has a massive, complicated sound with lots of dirty little secrets which I'm gradually finding out about. These saxophones are going to be available next year, once we've perfected the prototype. I also play an Otto Link 8* metal mouthpiece with 4 medium Rico jazz select filed reeds.

Along with the saxophone I use an Electro-Harmonix Memory Man Deluxe which is an analogue delay pedal. I've been using it since 2005 and its character and tone has enabled me to go on many epic journeys.

When I play live I put an SM58 microphone down the bell of the horn rather than using a clip mic (a technique I nicked from James Chance) which gives much more volume than a clip mic and produces a huge, saturated sound. Because the mic is buried inside the saxophone it doesn't pick up spill from the other instruments which is very handy when you're using delay to create subtle atmospheres. 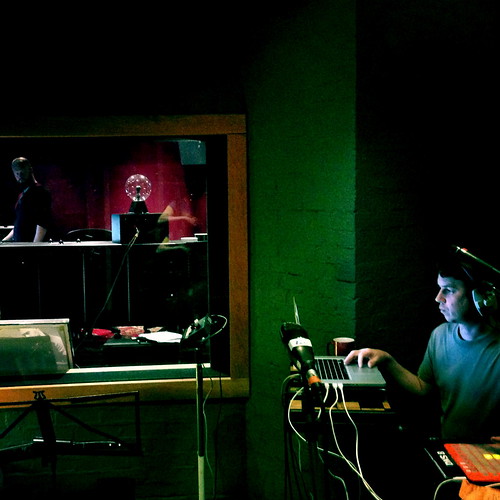 There's lots more coverage of all of this year's nominees on our Mercury Prize 2014 mini-site.