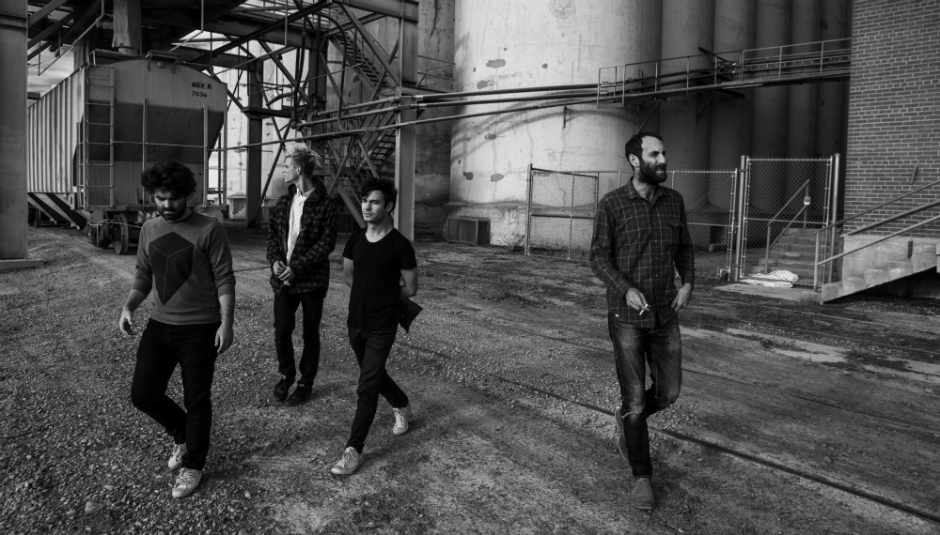 Hello. It’s that time of week again, the one where we round up the best songs we’ve heard from the past seven days, and there were plenty.

Viet Cong have emerged from (almost) nowhere to bag Single of the Week. Their new track, 'Continental Shelf', is a post-punk delight - if you can take much pleasure in austere cacophony.

Elsewhere, Run The Jewels have done an angry love-in with Zach de le Rocha, Palace look like being the new, exciting indie thing, and Fall Out Boy won't stop with their bonkers bombast.

There are also ace new tracks from Shura, Ex Hex and Animal House. It really has been a vintage time for new tunes.

Viet Cong have existed since 2012, but ‘Continental Shelf’ feels like the moment they really arrived.

Last year’s Cassette EP was the Calgary band’s first post-punk flirtation. Formed partly from the ashes of Women, the four-piece swung from taut eloquence to jangling anthemics in a daze of indecision. For a tour-only recording there was plenty to get excited about, even before Matt Flegel and Scott Munro settled on the sound of pure sonic dissonance.

While ‘Throw It Away’ and ‘Unconscious Melody’ were almost pretty in their delicate stylings, ‘Continental Shelf’ is definitively brutal. Following on from the crunching ‘Bunker Buster’, it revels in caustic swells of tremolo and static - pushing extremities on both sides of the sonic spectrum. If Interpol’s Paul Banks joined Iceage forces for a collaborative descent to rock bottom, they might create something similar.

Whisking up a swirl of feedback is easy though. What makes Viet Cong so compelling is their control. The first cut from their self-titled debut album constantly teeters on the edge of disarray, threatening to take one final leap into cacophony. Right when you expect bedlam to break out, Flegel quits with his sepulchral hollers and a chorus pops up.

“Fingertips in the fountain fondle liquid gold,” he sings in a fit of complete serenity. It’s as though he’s taken crooning lessons from Merchandise’s Carson Cox. There’s a real swagger to his apocalyptic nonsense.

That’s the Viet Cong way: melody in pandemonium. Long may it continue.

In an ideal world, Run The Jewels would be struggling for ammunition. Their righteous aggro-rap thrives on the still appalling state of US race relations. A state of affairs that’s been shown up most recently by the deaths of Michael Brown and Eric Garner. As it is, Killer Mike and El-P remain a vital check on the cavalcade of bullshit that’s still perpetuated by American police forces.

‘Close Your Eyes (And Count To Fuck)’ is a full-throated attack on any injustice that enters their crosshairs. It’s a ferocious counterpoint to John Oliver’s comedic takedown of Ferguson and police militarization, barely pausing for breath as it flits between targets.

“Where my thuggers and my cripples and my bloodles and my brothers?,” spits Mike with unrepentant venom. “When you niggas gon' unite and kill the police, mothafuckas?”

He and El-P are also joined by Zach De Rocha, who provides the track’s hook and a brattish guest verse too. “Fuck this slow mo, he declares at the track’s opening. Because Rage Against The Machine’s frontman knows profanity like no other rocker.

The result is a savage lead single that stands as Run The Jewels’ greatest triumph. Not that they’ll take much pleasure in this acclaim.

Palace are the next hype band from London who borrow liberally from Wild Beasts, have 289,000 Soundcloud plays and only held their debut headline show last week. They’ve also been handpicked to support Jamie T at Alexandra Palace, and already been spun on Radio 1 by Fearne Cotton and Zane Lowe.

Their Lost In The Night EP is out this week and, for the record, it’s pretty good. The four-piece do a good line in slowburn, spectral titilation and their frontman Leo Wyndham has a strange intonation that brings David Byrne to mind. Something weird happens when you Google Leo though. A MailOnline article about The O.C.’s Mischa Barton pops up stating….

“Mischa, who recently split from writer James Regan, is said to be dating aspiring actor Leo Wyndham, also 23, whose father, Henry, is the Old Etonian chairman of Sotheby's.”

With the help of his IMDb page, we then double-checked ‘actor Leo’ with ‘indie band Leo’ and found they are the same person.

Does any of this matter? Probably not. Will Palace be the Sound Of 2015? Maybe. Are we available for further private investigator work? Absolutely.

“The Fall Out Boy album. They bought it.”

“Who bought it, Johnson?”

“My god! Get them to do another one. Make sure it’s bigger, better, more extravagant than the last.”

“This is Fall Out Bloody Boy we’re talking about, Johnson. They’ll figure it out.”

If Madonna really is on the lookout for new collaborators then she could do a lot worse than Shura. The Shepherd’s Bush singer’s third single, ‘Indecision’, is another low key pop cracker that pays carefree homage to ‘Holiday’ and ‘Into The Groove’ while also dealing with serious, proper emotions.

Like ‘Touch’ and ‘Just Once’ before it, this bubbling mix of pautious synth and firecracker drums is about unrequited lust. It looks back on the remnants of a relationship with misty-eyed longing. “Tell me why, we can’t make this work?” sings Shura in tender, falsetto tones.

Ex Hex are best experienced on the wrong side of several whiskies. That way their dive bar scuzz kicks straight through to your hips.

In ‘Waterfall’s video, Mary Timony (formerly of Wild Flag and Helium) stomps and solos her way two-minutes of Grade A rock ‘n’ roll… in a spaceship.... while flying around Washington, D.C. Why? Because she’s badass, so shut the hell up.

As we were going to press, this new Sleater-Kinney track hit the web...

If this were 2004 and crack addiction was a prerequisite for being in an indie band then Animal House would probably be the next hype thing. As far as we know, none of the band suffer from a crippling narcotics dependency, but they can pull of a ragged guitar shuffle that puts The Paddingtons to shame. ‘Sour’ is their debut single and it’s short, sharp and stuffed full of wry asides, “There was a day when the sky was pale and my moustache played the piano scales.” We like it, a lot.

Whenever a new Noel Gallagher album pops up it’s common practice to say the former Oasis man should charge for his interviews instead of his music. Judging by last Friday’s edition of Celebrity Gogglebox, the ever dependable quote machine seems to have lapsed in form. His best bit of ‘banter’ with Kate Moss and Naomi Campbell was some inane chatter about Monster Munch. Still, at least he found time to propose a cure for cancer.

Planet Gear: Polar Bear on the gear b...