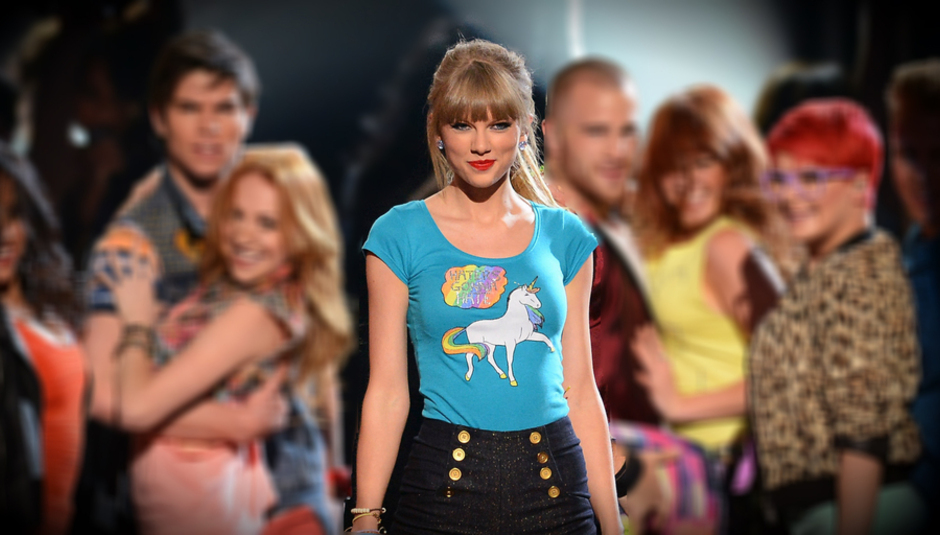 Why has the world fallen under Taylor Swift's spell?

Why has the world fallen under Taylor Swift's spell?

It’s only fair I admit that I’ve not always been Taylor Swift’s biggest fan.

'Love Story' was the one that did it. It was released at a time I like to call the Dawn Of The Dark Ages - the start of the recession, when I’d just made what turned out in hindsight to be a spectacularly poorly-judged life choice. And along came this 18-year-old wishy-washy American tweeny twangpopster, all perky and optimistic and comparing her ludicrous high school fancy to Romeo and Juliet, which, lest we forget, ended in a suicide?! (Oh, just fuck off).

Naturally, I have ‘Love Story’ stuck in my head now, so clearly the bitter and twisted me of 2008 needed to just get over it. And even then, I suspect I might have been secretly a little glad that someone like Taylor Swift existed.

Because, of course, the rest of us pretentious We Know Good Music lot are, right now, just playing catch-up to Swift’s younger fans. Those fans of the earlier albums knew all along what the wider music-loving world seems only now prepared to acknowledge: the best art comes from a personal voice, and Swift’s music has always owned that field.

We all know this, of course, because most wider discussion of most Taylor Swift albums has, to date, been dominated by running commentaries on who the songs are about. The press pepperings of Oh Which Ex Is This Song About Lolz has become a lazy standby, a negative spin on the notion that a woman - a young woman, and a pop star at that - could possibly own her own voice. That fact defies our established narrative of female performers, of any kind - unless they’re Beyoncé, who makes zero secret of her insane work ethic.

'These female performers, I don’t know man, they really should just have the common sense to stand there, look pretty in the outfits picked out by the record label as part of their ‘packaging’, and maybe have some talent. They really shouldn’t attempt to speak for themselves.' Ditto all of us IRL Women.

If we do speak up, all too often we are labelled as undignified; labelled as Angry Man-Hating Women if we identify with feminism; labelled as silly girls (or, worse, sluts) if we dare to acknowledge even in passing we might behave in a filthy manner if we somehow ever sleuthed to get Benedict Cumberbatch into our bedroom. We’re told that nobody wants to hear any of that, and that if we dare to talk about it our careers will suffer, our family prospects will plummet, our personalities will be stained. We're telling young girls this almost from when they're old enough to listen.

Well, Taylor Swift talks about all of it. And I don't see her career, love life or personality suffering for it.

Maybe the reason I’m more inclined to be sympathetic towards Swift nowadays is because, as a result of my own creative attempts over the last couple of years, I’ve realised first-hand just how spectacularly difficult it is to truly speak as yourself. Especially as a woman.

As a Woman, your sexuality is a topic for public discussion, but still primarily in the context of men. Your body and what you choose to do with it is, in 2014, an inherently political decision - whether you live in London or Tehran. Your career is your own, only up until the point that society starts nudging you with talk of ‘making allowances’ for children you may not even want. How dare you try and speak your own mind when there are much bigger issues? How dare you be so indulgent to think anybody would give a shit about what you think? How dare you try and be a fucking artist about it?

And that’s before you get to dealing with all the internalised insanity bullshit that led you to start creating in the first place. The act of putting your darkest secrets - all those wretched insecurities you worry will one day land you in the Sidebar of Shame - out into the world is an exercise in wrenching guts, of raking the mud. It’s made a million times more difficult by a constant dull blah-blah-ing telling you that, on one hand, your obligation is to speak for all women because supposedly we are one voice, and allegedly that is what sells; yet, on the other hand, being reminded constantly that you cannot speak for all women. Because you are not all women.

Whether you’re Taylor Swift, Lena Dunham, Amy Poehler, St. Vincent, Beyoncé or a journalist/copywriter who hasn’t even had her first script commissioned (yet but carries on in hope!), that pressure is disproportionate. Every song Swift writes is criticized as ‘oh it’s just about an ex, what a silly girl’ - while somehow ignoring that Swift is totally creating that game and laughing at us all whilst having fun playing it.

Every word Dunham speaks seems to come either with commentary on her ‘non-conformist’ (read: totally normal) body, or with a disclaimer about her parents and upbringing, as if to say ‘But she can’t speak on Every Female Issue Ever so don’t worry about what she does say’. We find reasons to belittle women who dare to speak from a personal viewpoint, whichever medium they choose to do it in, on a daily basis. Figuring out how to bare your soul in these circumstances can often feel absolutely impossible.

And yet, bare it we must. Because that is what it is to be an artist. The great irony about a ‘default female voice’ is that, as all those brilliant women named above demonstrate, a default female voice doesn’t sell. What sells is the personal, the intimate, the window into a mind that’s not our own.

The defining trait of 1989, Girls and just about every female artist we rate is women describing lives that are messy. Because, newsflash: all our lives are messy. From all sides, we often seem afraid to show women who have moments of weakness, confusion, sadness, and over the exact things we’re told we shouldn’t care about in Apathetic 2014: relationships; crappy jobs; the haters. We’re not all Angelina Jolie’s early 2000s action heroines; if we didn’t get upset over our lives being a clusterfuck from time to time, we’d be robots. The reason the world has gone nuts over 1989 is because, in reflecting on times in her life that have gone less than perfectly, Swift has given us something we can all relate to. In the personal lies the universal.

If we want more female voices in music, drama, novels; if we want a Black Widow film; if we want Kate Bush to do another comeback tour, we must be prepared to air our own fears, expose our mistakes, acknowledge our hopes. Which is something that Swift has done, for better or worse, all along. In that context, it's not difficult to see that the act of actively choosing to speak is one that defines Swift’s work far more than the bullshit about famous exes or country-vs-synth-pop.

Swift has come under fire previously for not labelling herself a feminist, and more recently for embracing the term now it’s become ‘acceptable’ to do so. That’s understandable - but it also misses the point. Because in articulating her own thoughts and feelings, even in the likes of ‘Love Story’, and - crucially - encouraging her younger fans to do the same, she’s been engaging in an inherently feminist act all along. We’re all just catching up. But, for now at least, it’s Taylor’s turn to speak.

1) DiS: Review of 1989
2) Guardian: We read every Taylor Swift thinkpiece so you don't have to
3) New York Times: Review of 1989
4) Billboard: Female Artists Ruling the Charts: A Movement or Just a Moment?
5) Guardian: How to be a female pop star in 2014 – video
6) New Republic: I Don't Care If You Like It - Women are tired of being judged by the Esquire metric
7) Popjustice: 1989 words about 1989
8) TechCrunch: 4 MusicTech Insights From Wall Street Journal Writer Taylor Swift
10) Taylor Swift's 'Shake It Off' - DiS Does Pop Special

Tabloids, Young Fathers and The Mercu...