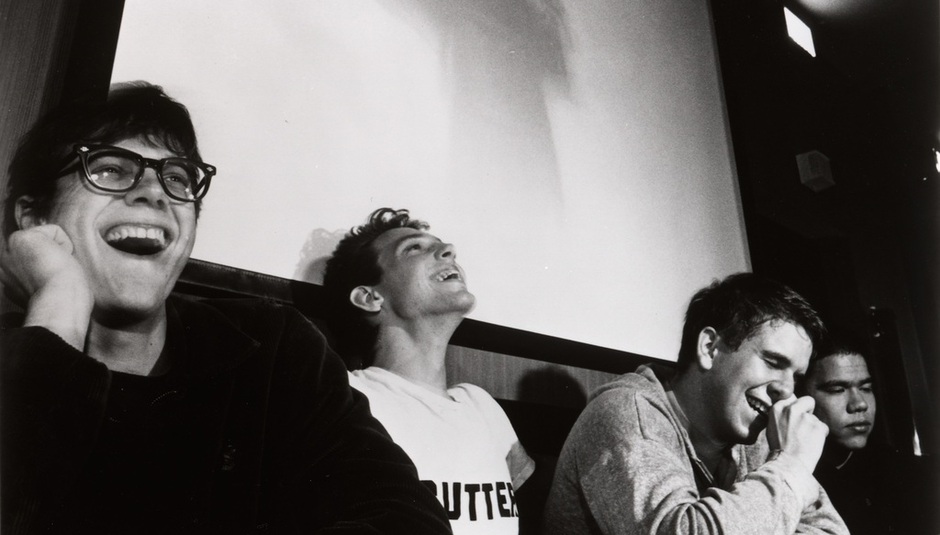 DiS was lucky enough to catch up with Brian McMahan and Britt Walford from Slint, ahead of the box set release of their classic album Spiderland, which features a new film about the band by Lance Bangs, Breadcrumb Trail, amongst other treats. In this second part we try and make sense of how they became so important after they stopped being a band, and what it was that brought them back together.

Read Part One here: "The people of Louisville are crazy": DiS meets Slint (Part One)

When Brian McMahan left Slint, it hit Britt Walford hard. “That was a huge blow," he admits. "I never really thought much about anything. I just did what I did but it was a huge blow when he quit.”

DiS: Did you understand why he was leaving at the time?

DiS: Do you understand now why he left?

BW: “Yeah, I have an understanding of how he feels about it.”

The financial concerns that plagued McMahan – how are you meant to make great music when you can’t pay your bills? – weren’t something that troubled Walford though. “I didn’t really have any problems like those,” he says. “I was full steam ahead.”

And that in itself tells you something about the contrasting, yet complementary nature of the shy, anxious singer’s relationship with the eccentric, carefree drummer. As teenage friends, McMahan and Walford were two peas in a pod, but as bandmates it’s their differences that are at the heart of Slint, where quiet, trembling insecurity clashes with uncompromising, unstoppable creativity.

McMahan got on with a normal life. “I worked odd jobs,” he says. “I’ve worked in kitchens in restaurants and I’ve worked as a telemarketer in Chicago. I worked at museums in Chicago. I ended up moving to Los Angeles and I did more of that sort of work. I did eventually – largely due to the growing audience for Slint’s music and Spiderland – I was able to make more music financially, at certain points.”

Not long after Slint’s demise, in fact, McMahan, Walford and Todd Brashear all played on the first Palace Brothers album with their old friend Will Oldham. McMahan later had his own band, The For Carnation, which Walford and David Pajo have both contributed to.

Pajo has maintained the most consistent profile in music, releasing records as Aerial M, M, and Papa M. He’s been a member of Tortoise and Billy Corgan’s post-Pumpkins wankfest Zwan (funny how Lance Bangs doesn’t mention this in Breadcrumb Trail…), and if you’ve seen Interpol or Yeah Yeah Yeahs in the last few years, you’ve might have seen Pajo lurking in the shadows at the side of the stage, replacing Carlos Dengler and backing up Nick Zinner, respectively.

“Man! Yeah. Yeah, man, absolutely. I definitely, I felt like that for years and years.”

Slint has always had special treatment from Walford: even before Spiderland he was taking incredible steps to preserve the purity of their music. For example, it’s not widely known that Walford played drums on The Breeders’ debut album Pod, shortly after Slint’s first record Tweez was released. He’s credited in the Pod sleeve as ‘Shannon Doughton’.

“Man, really it was because at the time I was kind of really, um, I don’t know what you’d call it,” he tries to explain. “I don’t know that it was idealistic but I was very particular in what I thought about music. For instance, Slint never did any promotion. We thought that promotion was just dumb. We wouldn’t make a poster because that just seemed frivolous or unimportant or something like that.

“Basically the reason that I didn’t want my name associated with the Breeders was so that if Slint did something people wouldn’t connect the two, because I just felt like the music should stand on its own and there’s no reason to think about anything like that. It seems kind of silly to me now.”

Silly, maybe, but it’s that attitude that makes the subsequent rise of Spiderland so peculiar. I only first heard it a year ago when I was record shopping in Leeds, and a friend stumbled upon a copy and said, “Rob, you have to buy this”. She, meanwhile, only got into Slint from visiting another friend at university who put them on his stereo; and he only first listened to them because a band he was into mentioned them in a blog. We didn’t hear them on the radio, we didn’t see them on MTV, we didn’t read about them in the NME. In other words, it’s exactly what Slint would have wanted.

Sales of Spiderland continue to grow throughout the ‘90s, as its apparent influence on rock music began to creep in. You’d hear a lot about how it spawned bands like Mogwai (to their frustration) and post-rock generally, but to these ears you can also trace plenty of ‘90s emo and ‘00s screamo back to the final bars of ‘Good, Morning Captain’ – McMahan’s screams of “I MISS YOU”, as important a reference point as Rites of Spring or Sunny Day Real Estate.

No one could have been more surprised by word of Spiderland spreading than the band themselves. “Man, really it was just like it was steady and regular and it kind of never went away, and that was pretty surprising,” says Walford. “I think I was surprised at the beginning that we made any money. After that it was just kind of like, ‘Oh wow, people keep buying it by word of mouth’. That was really cool and made me feel, I guess, happy.”

It wasn’t enough though: even by the mid-00s, Walford admits, he hadn’t really gotten over his band’s break up. Then along came Barry Hogan.

It was Hogan who, in 2004, convinced Slint (minus Todd Brashear or Ethan Buckler) to reform and curate one of his All Tomorrow’s Parties festivals the following year at Camber Sands. For Walford, it was something like a dream come true: “I always wanted to tour and do that kind of stuff and I never really have other than with Slint, so that was really awesome.”

McMahan might have needed a little more convincing, but he too was won over by Hogan’s evangelical fandom. “He’s kind of a force of nature,” says McMahan. “His energy and enthusiasm – it’s blowing up at all times, so that was a big part of it. And also, Britt had just had a child, and David was just then starting to settle down with his wife and so there was, on their part, you know… We figured if we could make a decent amount of money it was a good move for them. So between all of that and the fact that we did still really enjoy each other’s’ company, that kind of sealed the deal.”

DiS: Did the fans come into it at all?

BM: “We didn’t know! We had never played to big audiences so we would get fan mail and stuff like that but this was before everyone was on Facebook and Twitter, do you know what I mean? There was no Last.fm so we had no idea who wanted to see us. Barry just basically took a flying leap of faith in giving us that opportunity at that ATP. We really had no sense of what our audience would be in 2005.”

What’s revealed in Breadcrumb Trail is that Slint had in fact reunited twice before, in 1992 and 1994, but it didn’t work out. “There was definitely a sense in ’93 that something could work out potentially,” McMahan remembers, “but it kind of seemed to me that too much time had passed. The same sort of passion and focus wasn’t there at that stage and that may be a product of my perception but that’s how I perceived it.

“When we would talk on the phone or see each other around the holidays there was definitely a tension there like, ‘Man, if we wanted to do this, we might be able to’. But it was also that sense of commitment because I think at that stage it really would have required a more workman-like approach. I think that some of the fun would probably be lost and that may have impacted our decision to not follow through.”

By 2005 though, the timing was right for Slint to finally reap the rewards of Spiderland in a financially secure way. That’s not to say there weren’t nerves, though. “We knew the record was selling,” says McMahan, “but still doing a reunion performance, even if it was just one, we were really nervous. We wanted to perform well and we hadn’t played together in years, and I hadn’t at that point been playing music at all for a couple of years.”

It even got to Walford. “It was definitely nerve-wracking when we played our first show,” he admits. “We were so nervous, it was pretty insane. I don’t know if he would mind me saying, but I think I could hear Dave’s hands shaking on his strings when we were playing our first show.”

“It was nerve-wracking,” McMahan agrees, “but it was super cool, for the first time ever, to be playing those songs and everyone knew the songs. I really had no idea.”

Ironically, it was Walford who was most rattled by that first show where, stuck behind his drumkit, he couldn’t work out if the band even sounded any good. “When we were finished playing I had already resigned myself that the whole thing was going to be a huge failure,” he remembers. “I’d already processed being shocked and resigning myself to that. I thought we totally had bombed.”

Fortunately, he was convinced otherwise, and Slint went on to play a second run of shows around ATP vs The Fans in 2007, and a third around the final ATP holiday camp weekender in November. They return to Europe to play Primavera Sound (Spain) and Optimus Primavera (Portugal) in May and June.

As for new material, don’t expect it any time soon. There’s only been one new track in the decade since Slint reformed – ‘King’s Approach’, which was played at some of the 2007 shows – though you still feel like Walford’s got plenty more ideas he’d like to find an outlet for. “I’m really not sure,” he says, on the question of new Slint songs. “I’m just trying to figure out what to do next, musically. I definitely would like to make some new music myself so yeah, I’m not sure.”

“It’s not inconceivable but we don’t have any plans. These three times that we’ve come out, we really do see them as standalone events and I’m not certain that there’s a ton of people that would want to hear us launch into a set of entirely new material. We’re happy to get the feedback and appreciated what we have been fortunate enough to receive playing the songs on Spiderland. Maybe if people start harassing us sufficiently we’ll talk about writing new stuff.”

For now, they seem content enough to be doing the things they missed out on the first time round. “Like I said,” Walford begins, through his thick Kentucky twang, “I like playing music a whole lot and I like going on tour and stuff.”

The Spiderland box set is released on Touch & Go Records on April 15th.

Read Part One of the interview here: "The people of Louisville are crazy": DiS meets Slint (Part One)