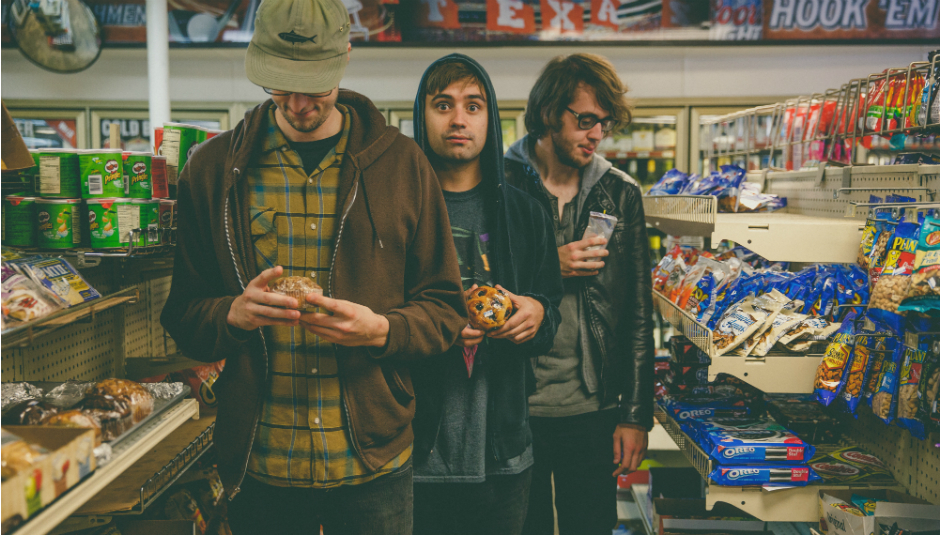 Hello and welcome to a brand new edition of DiS Does Singles, the music compendium that makes punk dreams come true. If you happen to be in Eagulls and appearing on the Late Show with David Letterman is your life's ambition. After featuring in this hallowed column, of course.

This week, we've compiled the best songs from the last seven days all over again. There's St. Vincent's grand address to the Twitterati, Bombay Bicycle Club's latest (and greatest) reinvention, and another eminently danceable cracker from Chromeo. Plus, Cloud Nothings have gone and created something spectacular.

You're welcome, US chat show bookers.

I’m Not Part Of Me (Wichita Recordings)

By the time Here and Nowhere Else hits all good record stores, Cloud Nothings won’t have released an album in one year and three months. This sort of work rate would have seen Kevin Shields unveil 18 new LPs between Loveless and MBV, but for Dylan Baldi’s bunch it feels like a lifetime. They rarely leave space to exhale between guitar chords.

Something big is afoot from the Cleveland, Ohio trio, and ‘I’m Not Part Of Me’ is reason enough to get ruddy excited about it. Thriving on forward motion, its rambunctious fuzz seems destined to inspire crushed glass in sweaty basements - whether or not Cloud Nothings are actually playing there. Such an outburst of unbridled positivity simply demands your limbs go flying in every which direction.

Baldi may have abandoned his self-confessed ‘fuck everything’ approach to songwriting, but rock bottom remains a recent memory. “I'm learning how to be here and nowhere else,” barks the ragged frontman. “How to focus on what I can do myself.” With John Congleton (Modest Mouse, Swans, The Walkmen) replacing Steve Albini on production duties, what might have been cause for acerbic introspection is something altogether more celebratory.

And why not? A bit of time off has been kind to Cloud Nothings. Revitalised and ever-resilient, they're hurtling towards rock 'n' roll significance.

To celebrate Cloud Nothings’ Single of the Week success, we compiled a playlist of righteous scuzz rock anthems. Each song below was made by a gang of losers with nothing to their names bar some guitars, drums and a refined sense of self-loathing. The lucky ones got handed access to a recording studio, the rest had to make do with the back of a Portaloo cabin.

When Annie Clark showed off a rainbow kick to rival Christiano Ronaldo’s last week, the internet went crazy. Parping brass arrangements are all very well, but football tricky from art-rock’s leading lady? It was too much to take in at once.

This kind of reaction is exactly why you won’t find St. Vincent spilling her guts in 140 characters or less. She’s a ‘give enough and let them guess the rest’ kind of gal.

‘Digital Witness’ takes aim at oversharing culture in the most bombastic manner possible. Key changes pass you by in the blink of an eye, while the only instrument missing from its technicolor melting pot is a kazoo. “If I can't show it, you can't see me,” cries Annie from the heart of this art-rock cacophony. “What's the point of doing anything?”

A good point, well made.

Several years ago around the release of I Had The Blues But I Shook The Loose, we were lucky enough to interview Bombay Bicycle Club, and foolish enough to provoke their ire. Having suggested their experimental tendencies extended to ‘flirting with a few synths’, frontman Jack Steadman proceeded to give us a telling off that essentially boiled down to ‘you just haven’t been listening properly’.

While we can’t claim credit for BBC’s subsequent genre hopping, our own tactlessness certainly struck a nerve. The London-based four-piece have been in search for the best version of themselves ever since. This quest has seemingly climaxed with ‘Luna’ - a thing of polyrhythmic beauty that easily trumps ‘It’s Always Like This’ or ‘Dust On The Ground’.

Steadman’s vocal collide with rasping bass and flutters of electronica, climaxing in the kind of crescendo that's fully deserving of an ear-to-ear grin. We thought they didn't have it in them. In hindsight, we were warned otherwise.

Chromeo are the kind of band that formed to hang out with models and pay homage to Michael Jackson. Conveniently enough, their video for ‘Come Alive’ sees David Macklovitch strut along to slick electro-funk in a red zipper jacket, and mash faces with a few brunets. There’s also a 40 second lingering sequence where he fannies about while sat on a Mini - because those beautiful people won’t pay for themselves.

If you can ignore this rampant chauvinism, the song itself is a solid 9/10.

There’ll come a time when Banks emerges from her cocoon of hollow drums and dissonant howls with a smash hit. ‘Brain’ is not that song. Instead, the third placed Sound of 2014 chanteuse sticks with downcast tradition to dismiss a try-hard beau, “I can see you struggling. Boy, don't hurt your brain.”

There are spectral bleeps, angsty booms of synth and something you could vaguely describe as a chorus. Business as usual then, but for how much longer?

Waiting For The End (Bella Union)

PINS are in the party mood and you’re invited! To be more specific, they’ve got pissed and made a karaoke-themed video to accompany ‘Waiting For The End’. You can sing along to its caustic twang and crack open a beer if the need arises. Not now though, your boss probably wouldn’t approve.

There are a lot of words in ‘Transatlantic Tumnus’. We’re not convinced Free Swim understand what they all mean or why Lord Baden-Powell deserved a shout out, but that’s okay. Morrissey made a career out of his rhyming dictionary diarrhoea. Maybe this lot can too.

She’s Not Gone Yet But She’s Leaving (BMG)