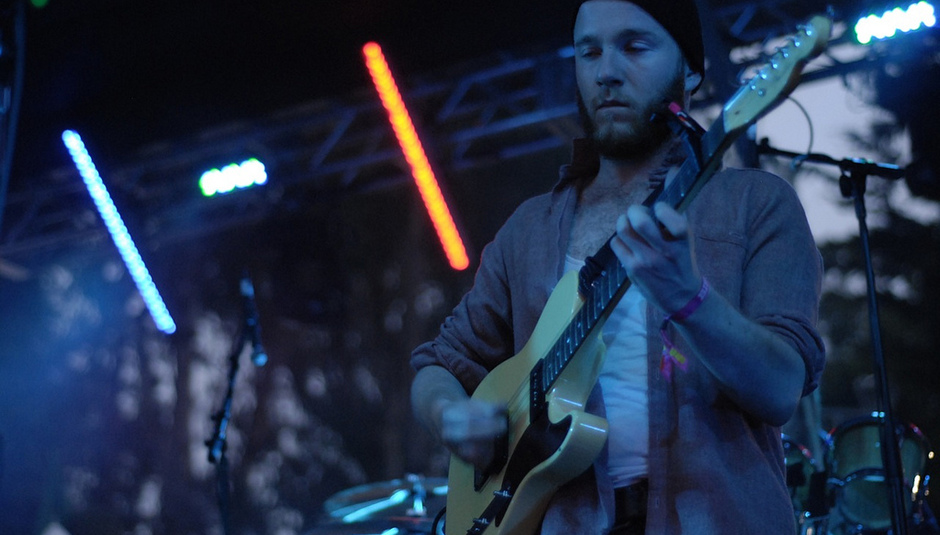 This week's hand-picked Spotifriday playlist, featuring Idiot Glee, Wild Beasts, FaltyDL, Murcof, Mazes, Jeffrey Lewis and many more. Click here to listen to it. Remember, folks, that Spotify have now limited the amount of music you can listen to using Spotify Free. So you might want to upgrade if you're a heavy user.

This was in fact not Single of the Week, but it was second on the "billing". Whether it got a silver medal or not I am not sure, but Wendy Roby had this to say about it: "This time around, Idiot Glee would like to convince you that they are not in love. I don’t believe them, singles don't sound like this unless you are deep in the clutches of love's vile madness."

2. Jeffrey Lewis - 'Banned From The Roxy'

On originally hearing this track, I pondered "what has Jeffrey 'Jeff' Lewis done so bad that he's banned from the Roxy?". Then I realised it was a Crass song, not one he, like, penned himself. We reviewed one of their album reissues this week although we didn't stoop so low as to give it a mark out of ten. That would have been foolish.

You! Mazes played that Live at Leeds Festival last week. It was a festival we attended and therefore, in our capacity as a music reviews website, reviewed. Read our verdict on what happened and just how it happened and indeed in what manner here.

WANT TO FIND OUT WHAT MUSIC YOUR FRIENDS ARE LISTENING TO? BY FIRING UP SPOTIFY SOCIAL YOU CAN NOW CONNECT WITH YOUR FACEBOOK FRIENDS IN SPOTIFY, SUBSCRIBE TO THEIR PLAYLISTS, AS WELL AS SEND SONGS DIRECTLY TO THEIR SPOTIFY INBOX. YOU CAN EVEN SEE HOW MANY TIMES YOUR PLAYLISTS HAVE BEEN SHARED. DISCOVERING MUSIC HAS NEVER BEEN SO SIMPLE. OR SO MUCH FUN.

This is a Tall Ships track called Plate Tectonics. It's currently 23:34 as I write this and I'm unable to think of any suitable words for it as I'm highly distracted by the guffaws emanating from the lounge, most likely at Question Time. I'm sorry. So terribly sorry. Oh, they also played Live at Leeds. I assume this track was played.

As you have probably read by now if you have any interest in the matter, Kendal four-piece Wild Beasts release their third and newest record next week. It's called Smother. You can watch a French-filmed session and also find out some information about a stream of the album in this news story.

It's now no real secret that EMA has well and truly won over our editor. But it was time for her to win over another one of our ranks in DiS stalwart James Skinner, who reviewed the debut offering here, awarding it 8/10. That represents a good start, doesn't it? PS. Stop whispering.

SPOTIFY NOW WORKS TOGETHER WITH SONOS MULTI-ROOM MUSIC SYSTEMS. UPGRADE TO SPOTIFY PREMIUM TODAY AND YOU'LL ENJOY UNLIMITED MUSIC ON YOUR SONOS SYSTEM THROUGHOUT YOUR HOME, WITH WIRELESS CONTROL. GO TO SPOTIFY.COM TO FIND OUT MORE.

In terms of "things to come out of Germany" in the last five years, Mr Pantha Du Prince has to be in the Top 3, with Mesut Özil. White Noise was a cracker of an album first time round, but how does the remix album fare? Pretty well, according to Alex Baker.

Roll up, roll up, it's another edition of armchair dancefloor, with a whole array of excellent electronica from start to finish. Read it here and/or listen to this Murcof track. Murcof is featured in number 31, by the way, should you question the relevance.

It certainly IS all good, isn't it? Watch the video for this particular track over here. It kind of adds a bit without adding too much, you see.

This weekend sees a great series of concerts at the Barbican in London, all under the title of Reverberations: The Influence of Steve Reich and, to celebrate this, we had a series of composers writing about the great man himself. That is indexed here.

Click here to listen to this week's playlist and here to browse the archives.

From John Cage to Liars via Nurse Wit...