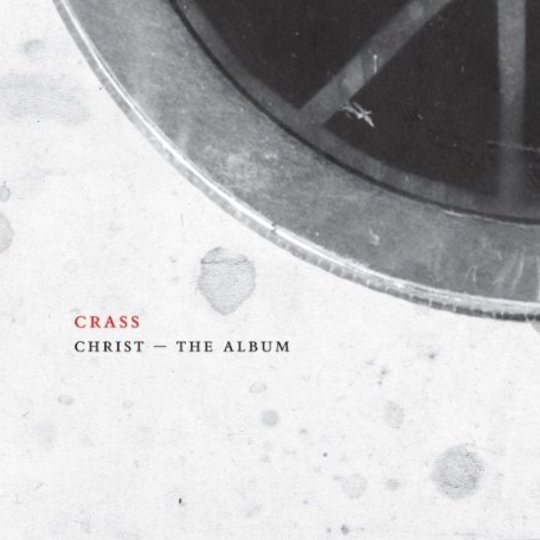 Given the group’s profound influence on the counterculture of the 'Thatcher Era' (whether that has actually finished yet is open to debate) and a lack of sophistication in their work that borders on the pathological, the challenge for a music writer approaching Crass is to avoid the temptation to lapse into amateur sociology. Fortunately, this doesn’t restrict us to discussing what comes out of the speakers when you press 'play', or we’d be in the pub before the end of the second paragraph, despite the fact that Christ: the Album is as close as Crass came to trying to appease the mainstream. In singer Steve Ignorant’s semi-serious words, it’s their 'flashy, self-indulgent rock masterpiece'. But, and I’m sorry to have to break this to you, King Arthur On Ice it is not.

The interesting question the music of Crass raises isn’t 'can – or should – pop be political?' (obviously it can, and the normative variant is more or less meaningless) but 'how best to convey political ideas in the medium?' Crass’s answer lies in a Spartan unity of form and content where widespread, genuine fear of imminent nuclear war and of a radical right-wing government openly contemptuous of the lower orders is – Penis Envy and the odd track elsewhere aside – represented by an angry man barking painfully unambiguous and didactic lyrics over uptight, martial drums and guitars that resemble low-grade sandpaper. Their answer isn’t as obviously wrong as it may sound. True, in 1981 as now you were more likely to hear ‘Ghost Town’ than ‘Reality Asylum’ on Radio 1. But Crass weren’t interested in infiltrating or in being assimilated. Their strategy – their legacy – is one of withdrawal, refusal, as much as of opposition. I wouldn’t imagine it’s a huge source of regret to them that they’ll never be stopped in the street by some pissed arsehole who wants to express his love of ‘Tubthumping’.

How does flashy, self-indulgent Crass differ from the standard version? Almost imperceptibly. But the extra time and money the group spent on Christ does mean that for once you can really hear what those supersaturated guitars are doing, and the drums don’t sound like somebody typing in the next room. They’re deliberately writing within limited confines: apart from the drummer and one of the guitarists this seems to be more a matter of necessity than of ideology. But for all the simplicity of the parts they’re as tight as a marching band, the playing is inventive and the arrangements are constructed with considerable attention to detail. It’s perfectly possible to cast Crass as a parallel musical development to No Wave, or to hear their guitars as forerunners of, for example, Big Black’s: noise generators, hand controllers for the distortion itself, no longer things with strings.

On a good night, they must have been a fairly astonishing live act. Aural assault aside, Crass were very much aware of visual presentation, using film projections and a uniform, if you want to call dressing in black a uniform, to underline their role as paramilitary outsider propagandists. Their records, also, as well as selling ridiculously cheaply, were smartly packaged in terms of both design and materials. Like the original vinyl edition, this CD reissue comes in a handsome box with an extra disc (live tape cut up with sundry other stuff: might appeal to fans of Stockhausen and/or The Worst) and a Gee Vaucher collage depicting, among other things, Thatcher shitting offal and skulls into a bucket held by the Duke of Edinburgh. It’s a beautifully turned out document. It’s nice to see them doing their bit for commodity fetishism. I’m unlikely to listen to it again.

But because Crass actually did change all of our lives, because for a time they almost single-handedly kept alive the anti-capitalist ideals of the late Sixties and found a way to synthesise them with the fury and nihilism of punk, because 30 years later there is still somewhere a frightened but defiant 16-year-old who will face down a wall of tooled-up riot police for what she believes is right, because they fucking meant it in a way that few popular music outfits could begin to comprehend, I’m refusing to subject Christ: the Album to the indignity of being given a mark out of ten. There. Take that, The Man.