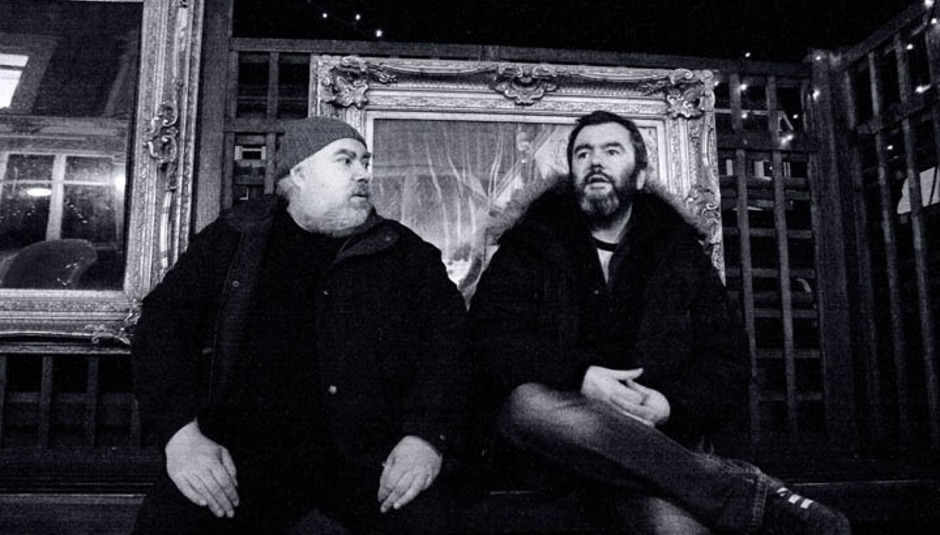 As part of our special Aidan Moffat takeover day, Aidan talks about his new album with Bill Wells and the perils of ageing...

"My new album with Bill Wells is called Everything's Getting Older. This may sound a bit bleak, but the title is intended as nothing more than an observation; an undeniable truth that applies to everything we know. Honestly, I've always looked forward to getting on a bit and, so far, I harbour no fear of ageing at all. I've always looked a bit older than my years anyway, mainly due to a decision made long ago that I'd never shave my face again. As soon as I was old enough to trim the dark hair sprouting from my pubescent mug, I was the victim of excruciating shaving rash, and one day I just decided not to bother. There were one or two lapses in this new discipline, but by the time I got to my late twenties I'd decided to stick to the plan until my beard falls off naturally. A friend of mine would constantly observe that I'd look ten years younger without it, to which I always replied: Why would I want to look ten years younger? I've never understood the fascination with youth; I've been anticipating the adult me for as long as I can remember.

Greying hair, for instance, doesn't bother me in the least. In fact, I positively embraced it the moment it happened. There were a few hints of silver on my head, but it became most apparent when it turned up on my face. As I've already explained, there's no way I was shaving it off, so I decided to grow it a bit longer and accentuate it. I fashioned it into a sort of feature, and now I have two distinctive white stripes curling under my chin, the sort of thing that would be handy in a Crimewatch photofit.

The follicles on my head are a different matter though. The rapidness with which my hair thinned out on top was quite shocking, and I often study it under the brightest bathroom light with fascination. It doesn't upset me so much as intrigue me; there's no point losing sleep over the inevitable. But how do I adapt to this new threadbare pate? I haven't quite worked that out yet. I always thought that when baldness began I would just start shaving my hair off, and I've tried this a few times to varying degrees of success. I really enjoy the process – there's something quite satisfyingly manly about taking a set of clippers to your head and buzzing it all off – but the jury's still out on how it looks.

But do I really care about how it looks? One of the joys of approaching your fortieth birthday is surely the comfort in knowing that you don't need to try too hard anymore. Which isn't to say you don't care about your appearance and have consciously made the decision to let yourself go, just that you've reached a stage in life when you're comfortable with yourself and have accepted the way you are; you should know what works by now, and age brings confidence. I could do with losing a pound or too, certainly, but every time I've gotten thin (although it’s been a while now) someone will tell me that I just don't look like me. And I know what they mean; a bit of a belly seems to suit my character. Despite what you may learn about me from some of the songs on the album, I'm actually much closer to the jolly fat man stereotype than you might guess. At least that’s what I’m telling myself.

Wrinkles don't bother me either, in fact I think I look better now than I used to. I like the creases, the wear and tear, the scar at my eye and the lines in my forehead, but thankfully nothing's started to sag yet. Although I'm pretty sure my testicles hang lower than they used to, and I often accidentally sit on one and recoil in hideous, sickening pain. No-one ever mentioned this particular male problem to me before, but I can't imagine I'm alone. I expect a scrotum is much like an earlobe, in that it continues to grow throughout your lifetime, or rather gravity inexorably drags it downwards.

One thing that did always worry me as a youth was the fear of my tastes becoming more conservative as I age, but I'm pretty sure this has yet to happen. Maybe even the exact opposite's transpired: I'm much harder to please than I used to be, and I'd rather listen to Jon Mueller's new thirty-minute drum experiment than just about any new young band. Music is often used to describe personality, and if there's any weight to that idea then I seem to be happily disappearing leftwards and arsewards as I become increasingly bored by what passes as ‘new’ music. There comes a point in life when you really do think you've heard it all before, but rather than dig out records and revel in nostalgia, I continue to seek out sounds that are completely new to my ears, whether they were recorded last week or last century.

A good way to extend the musical metaphor is to use The Fall as a barometer. They’ve been making the same new record since I was a kid – "Always different, but always the same", as John Peel put it – and they, or rather "he", because it's really Mark E Smith we're talking about now, have remained a stubborn constant in an ever-evolving scene. When I first started going to see The Fall as teenager, I was amused by the amount of old men up the back – now those old men are my mates and me, not quite hidden at the rear of the venue but far enough away from the moshpit to avoid any splash or injury, enjoying the show at a slight distance. It’s the same gig, but we’re just that little bit safer.

In fact, I can only think of one handicap that the advancing years have supplied thus far: the hangover’s get much, much worse. One spirited night out can often require two dismal days in bed with a bucket by my side and the phone unplugged, which is especially painful with a toddler running round the flat.

But I say: Embrace your future. Although perhaps if you ask me again in a decade or two, when I'm completely bald, my thinning pubes have all gone grey, my eyesight’s starting to fade and my penis doesn't work, I may well have changed my tune. Only time will tell." Everything's Getting Older is out now on Chemikal Underground Records. You will find heaps more Aidan Moffat takeover day content by tapping your mouse here.