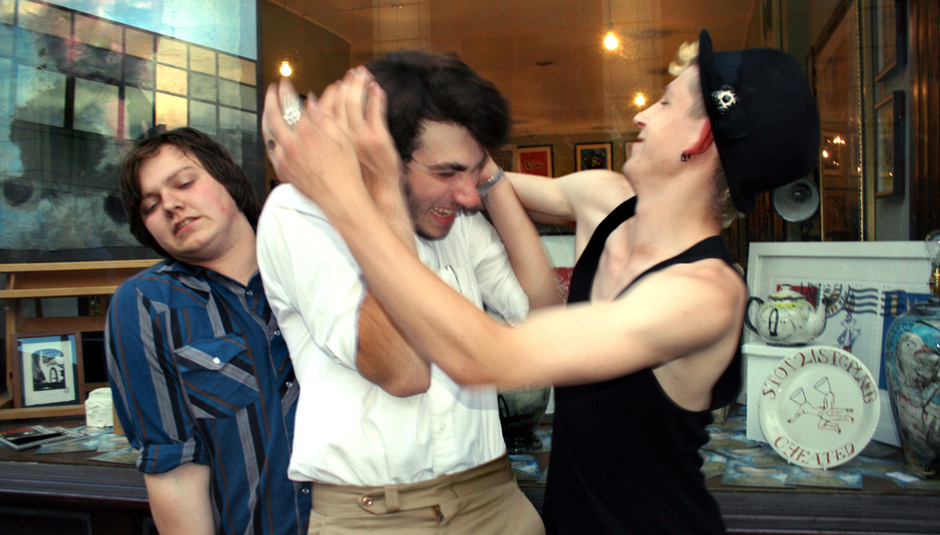 This week's Spotifriday playlist, featuring the works of Liars, !!!, NLF3, Ramadanman, Raime, Danny Saul, Andrew Bird and more! Click here to listen to the playlist, via the ever-popular medium of Spotify.

Hmmmm. We couldn't find any !!! more recent than this on Spotify, so we had to settle for something ten years old or so. We hope you don't mind. Anyway, the reason why they are on this week's Spotifriday playlist is because they done won Single Of The Week. Go and read more about it here.

Simon Jay Catling described Factory Floor's recent Manchester show in these terms: "They rarely connect with the entire audience - some tonight seem terrified, some are enthralled - but they always leave an impact that any ensuing act can’t hope to emulate, no matter how long or celebrated their back catalogue is. In times of unrest people either shelter away or become inspired; these are those times and Factory Floor have decided on the latter, providing 2010’s disturbing soundtrack in the process." Say no more.

This track is an audio soup of some bottom-end tinkling and about a trillion other fireworks going off in the periphery. And thus, it has actual purpose and a reason for being, and is also wonderful. It's taken from their new record, which we reviewed here.

This track by Ramadanman, on the other hand, is lacking in the peripheral fireworks but kind of places everything mostly into the centre to drill away at you incessantly. You know what? It works. It's featured on Apparat's latest release, DJ Kicks, which was reviewed this week.

"London City" is a very strange term, and one is used perhaps incorrectly. But enough of that sort of pedantry, here Devlin talks us through a typical night out. He likes people dancing. It's an in depth account, to be sure. Read our interview with him here.

A Best Of release by Suede was always going to do well, wasn't it? It just missed out on a perfect 10. There's not much more that can be said about it, but head here to read the review.

Some people say that Let's Wrestle's debut has been one of the best British records of the last 5-10 years. I'd agree with them, although my judgement may be slightly out. Still, at the VERY WORST it is one of the most FUN records of the last 5-10 years and every time it sucks you in some more until they are the only band you see fit to listen to. We met up with the boys recently and here is what came of it.

Fireworks may have already been mentioned once or twice so far, but those devices are most fitting to describe this bite of wonderment from Raime. Slow-motion fireworks. Darkness. Brief flashes of brightness. Expanse. Encased. Just some words. Anyway, this was included in Chris Power's FINAL armchair dancefloor column, which can be found here.

I wonder if fukpig were so named to try and bypass the swear filters? I hope so, that shows innovation. 'One Nation Under One Eye' is decent enough but it's just not quite ball-draggingly doomy for me. They played Birmingham's SuperSonic Festival the other day and we were there to witness them.

Another single from Brainfeeder. Wendy Roby sez: "Teebs have used jingling change as a percussive tick, and it sounds good even if you find yourself in a penniless panic in which Christmas starts to look ever more sack and coal-like. It’s also got water bubbling, synths that waver in a quite irregular fashion and which certainly don’t portend nice stuff. ‘Why Like This’ – given the hints provided by the title - may be a lyric-less, dubstep state of the nation address in which we ponder the Dreadness of Things via the medium of spooky noise. Or it could just be another excursion into the land of wibble. You work it out while I listen, I think it is quite good."

As was briefly mentioned, edition 024 of armchair dancefloor is Chris Power's last. I'd like to thank him for each and every one of those columns, there's been some top-level material in every one. Rory Gibb takes over from 025. This edition's mix was put together by Danny Saul, so here he is.

Things are finished off by a cut from Andrew Bird's recently released instrumental record, Useless Creatures. Read the review here.