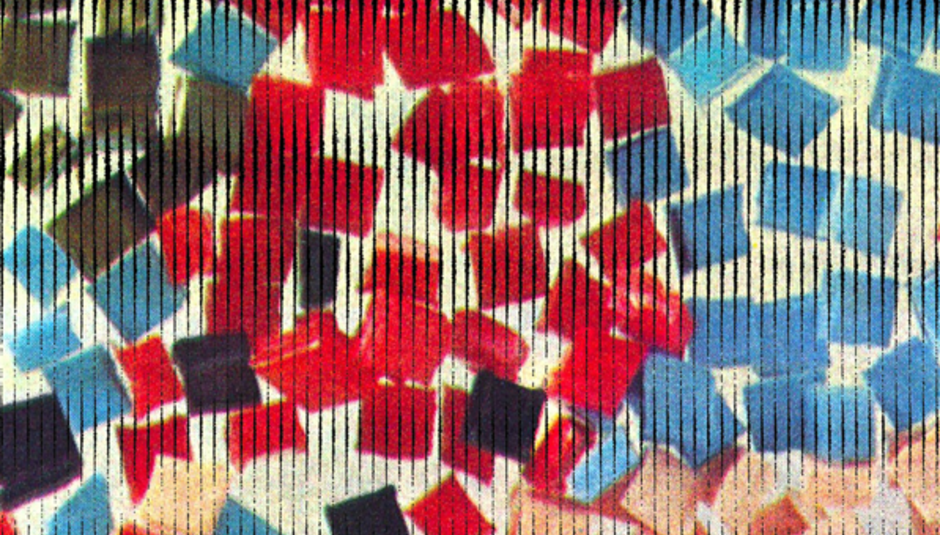 This month's look at the best electronic & experimental releases (IMHO only, of course) will be my last before fellow beat DiSciple Rory Gibb takes command. And what a crop to finish with: Keith Fullerton Whitman's first full-length in four years contains multitudes; two new labels - Blackest Ever Black and Broken20 - deliver powerful statements of intent; Ostgut Ton celebrates five years in business with a double CD of exclusive and varied techno and house; and John Roberts arrives with a lovingly crafted album of house classicism.

Before I leave, I'm very proud to sign off with one of the best mixes I've had the pleasure of hosting on these pages. armchair dancefloor mix024 is compiled by Mancunian musician, label head and all-round music fiend Danny Saul. You might know Danny through his work with cult Manchester band Stranger Son of WB, as half of experimental electronic outfit Liondialer with Greg Haines, as a solo artist - his Kinison - Goldthwait LP is forthcoming on Hibernate - or as head of the White Box label (whose That It Stays Winter Forever compilation, featuring live performances from Machinefabriek, Kleefstra/Bakker/Kleefstra and Liondialer is released next month). And if you don't know him, here's the perfect opportunity to get introduced. Cycling through post-dubstep, drone, greyscale techno, bleak digital wastelands and Ice T bum rushing Sunn 0)))'s show, his armchair dancefloor mix features exclusive unreleased tracks from Jasper TX, Seasons (Pre-Din), Richard A Ingram and Greg Haines. If you want more than that, you're cracked.

Just like the World Cup, it's taken four years for another Keith Fullerton Whitman full-length release to roll around. Unlike the World Cup...well, let's face it, everything else about an analogue modular synthesizer record is going to be fundamentally dissimilar to the World Cup. Using various field recordings (a helicopter, steps in snow, playing children) and a series of contact mics feeding the sound of the various mechanisms involved back into the piece itself, 'Disingenuity' is a sprawling 17-minute eruption that, but for a brief moment of respite a little over halfway through, is sonically astringent. But, like getting pissed on in the Lake District, the discomfort is of the bracing sort. 'Disingenuousness' feels at once more graspable and somehow stranger, consisting of it does as arpeggiated note sequences in violent flux, a rapid beat fluttering and flapping in the background. By the end of the piece, over a quarter of an hour later, the notes have slowed to wavery trebly repetitions that feel like an earlier, more chaotic form of the euphoric tumult of Underworld's 'Rez'. Whitman is a rarity: an academically rigorous musician making visceral music. Some very interesting vibrations are emanating from new label Blackest Ever Black, whose debut release from Raime kicks off this month's mix from Danny Saul. Remaining “fucked-off and resolute” appear to be label boss Kiran Sande’s goal, and if future releases match the quality of this he’ll have plenty flocking to his banner. Raime patrol the same electronic borderlands as Shackleton, Mika Vainio, Ben Frost and Burial, but with the latter’s mournfulness sharpened into menace. From the modulated Gregorian chant of ‘Retread’ to the tolling bell of ‘We Must Hunt Under the Wreckage of Many Systems’, Raime use common materials, but with such poise and restraint that their hokier associations are dismissed. Their drum patterns, vaguely 2-step, creep past at a leaden pace, surrounded by vocal wisps, corroded stabs and the sound of massed, distant crowds.

Blackest Ever Black’s ‘Scripts for the Pageant’ mix.

Celebrating five years of Ostgut Ton, the label that grew out of Berlin techno club Berghain (and its smaller upstairs area, Panorama Bar), the 24 exclusive tracks included here all feature field recordings made within the club. This approach not only results in some wonderfully unexpected music – Norman Nodge’s ‘Start Up’, for example, weaves a delicate, stop-start 4/4 rhythm through the sounds of an orchestra tuning up – but underlines the link between location, aesthetic and programming that defines the status of Berghain and Ostgut Ton as not just club and label, but unified techno aesthetic. As a statement of that aesthetic, Fünf excels. Marcel Dettmann’s ‘Scourer’, Ben Klock’s ‘Bear’ and ‘Gestalts’ by Substance exemplify the sinewy techno that powers the main room. But Ostgut is a broader church than some think: there’s space here too for the jazz-inflected dub techno of Maragaret Dygas’s ‘Quintet’; for the live drums, melodic squeaks and sonic spaciousness of Prosumer’s ‘Daybreak’; and for the heavily delayed Chicago house stabs of ‘Wenn Meine Mutti Wüste’ by Soundstream. Glaswegian Ruaridh Law's new label has been building up to its first release with a superb series of podcasts, and the anticipation they've generated isn't betrayed here. Law unifies his noms de plume on this release, the catholic techno of TVO moving from the liquid Detroit funk of 'Bc7 Memory' to the juddering, almost-dubstep swirl of 'Wasted Memory', and 'Remaindered Memory's dubbier flow. On the hour-long title track, which comes under the aegis of Law's more experimental handle, The Village Orchestra, there's a similar flitting between styles, but the transitions are long and artful: this recording of a live, improvised performance in Manchester is an immersive experience in the sense of, say, Basil Kirchin's 'Quantum'. Blending field recordings with monologues from Law's parents, static interference, an extended, lulling choral sample, shifting synth textures and a steadily building sense of drama, it's an intoxicating work that leaves a deep and lasting impression. Blending a classical sensibility with classic house and some of the warmest rhythm section work since Issac Hayes hot buttered his soul, Berlin-based American John Roberts has delivered a debut album of considerable worth. This is richly detailed deep house that knows how to stay dynamic, never letting its own smoothness seduce it into outstaying its welcome. The wavering stabs and subtle vocal microsample of 'August'; the reversed notes and thick double bass of 'Navy Blue'; the moodier electro rhythm and metallic tones of 'Dedicated'; the piano-edged thump of the title track: every sound and shifting mood slots gracefully into place, creating a piece of work that gets a little better each time you hear it. The second piece of music featured this month to use what sounds a lot like Gregorian chant, ‘Incantation’ is one of the smaller but no less powerful tracks on drone duo Barn Owl’s third album. San Francisco-based guitarists Evan Caminiti and Jon Porras are pushing their drones into interesting spaces at the moment, their black metal experience coming through on tracks like ‘Light From the Mesa’: its rumbling central monotone crumbles into large, ragged riffs at its climax. The title track, at 10 minutes the longest piece here, showcases the intelligence with which they approach the basic quiet-then-gradually-louder drone template, scattering numerous mini-movements and intricate details throughout its progression. The final third of the track is a recessional, giving as much attention to the aftermath as to the fireworks. It’s this kind of thoughtful, well-rounded touch that distinguishes Barn Owl’s playing.

James Blake's run of near-perfect EPs continues. The title track is propelled by a dry handclap and a beautiful plunging collision of vocal samples, like a tablecloth being pulled off a fully loaded dining table in slow motion. The hissy, rapid ballad ‘Tell Her Safe’ gallops forward on a trebly cowbell and a rolling organ melody; ‘Don’t You Think I Do’ surrounds its mournful core with fizzing bolts of chiptune synth. On ‘I Only Know What I Know Now’ a descending sequence of piano chords partners with heavily modulated vocals sighs and a fragmented, tear-streaked diva refrain, shreds of alternate vocals shaking from it like tears. It's beauty seems so simple that the oddness of its construction – particularly the clipped brushed drum samples that scatter around an unadorned kick – doesn’t register at first.

On a solo break from Type astral krautrock types The Alps, Root Strata boss Jefre Cantu-Ledesma uses Love Is a Stream to deliver a series of studies in shoegaze’s more uncompromising styles. Tracks like ‘Loving Love’ and ‘River Like Spine’ are melodic, but their accompanying textures – deep corroded rumblings and machinery-like whines – serve to make them sound less structured than they are. Tellingly the shorter pieces – ‘Star Garden’ and ‘Womb Night’ both last little over a minute – are as carefully wrought as their lengthier companions. Responses are personal of course, but ‘Wild Moon and Sea’ is the track I can't shake: it’s a haunting mandala that elegantly shimmers out of and recedes into a quavering thicket of white noise.

Featuring music composed for documentary film The Vanishing of the Bees, Brian McBride, half of Texan drone outfit Stars of the Lid, felt he had to incorporate more changes in these pieces than would normally be the case, so as to give the filmmakers some flexibility. Unsurprising to Stars of the Lid fans will be the revelation that, try as he might to create some happier atmospheres, McBride was powerless to prevent these compositions being ‘subsumed by the lamentable’. I’m not sure I’ve read a Stars of the Lid review – at least from The Tired Sounds of... onwards, that doesn’t use the word stately, and I’m not about to buck that trend. Sorrow is always returned to in these warmly enveloping orchestral compositions, whether it’s with the directness of the three-part ‘Toil Theme’, or the haunting lilt of ‘Chamber Minuet’, that only surrenders its sense of guarded uplift at the last, the melody fading away into a hollow echo.

The Swedish duo of David Wenngren (who also records as Library Tapes) and his partner, Ylva Wiklund, work distant, echoing vocals around attenuated drones that might originate in piano (Wenngren’s favoured instrument) or guitar notes. There’s something of the warm, fuzzed-over quality of early Múm to Murralin Lane that situates this partly comforting, partly disquieting album between the autumnal and the wintry. Wenngren and Wiklund’s great strength is their willingness to occlude the beauty of some of their compositions – as on the Grouper-like ‘When I Told You’, which swathes itself in chapels of reverb.

In Photos: The Bizarre Winter Ball 20...