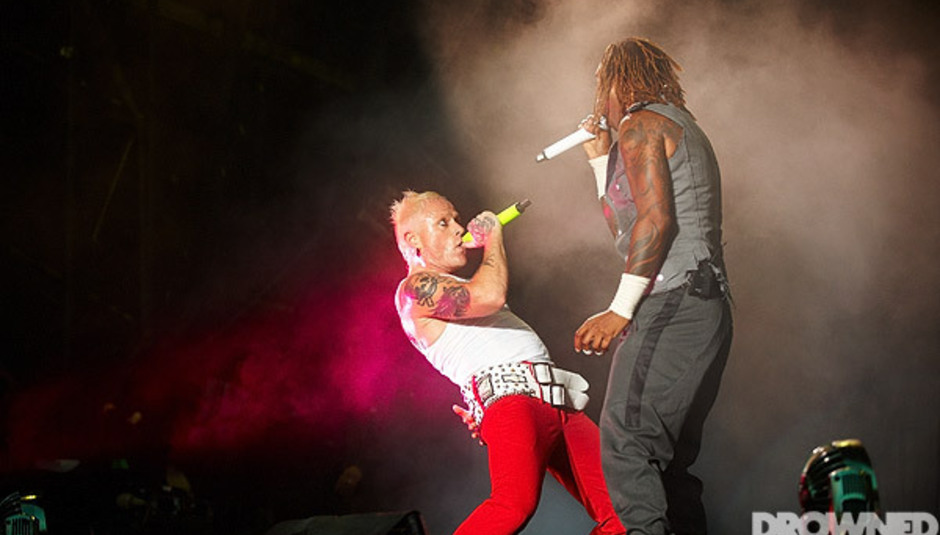 Radiohead? Radiohead? Screw that. Reading and Leeds are rock festivals, damn it, and I’ll have mine with Jaegermeister and a distortion pedal, thank you very much. Sure, there’s no ‘metal day’ as such this year, but there’s still plenty going on, thanks to a liberal smattering of heavy bands across the three largest stages, and the two-day Lock Up tent. So then: black t-shirt and board shorts at the ready, I take to the moshpit.

It’s Friday morning, and the festival kicks off with what’s either the most inspired or most insane thing I’ve seen all year. Mariachi El Bronx – the vaunted side project of, er, The Bronx – look not dissimilar to the Three Amigos and play a mix of reimagined Bronx material and brand new tunes apparently written especially for this project. It’s brilliant in its lunacy, and is well worth checking out.

It’s another Josh Homme project, Eagles of Death Metal that’s up next – and his absence is notable (although not notable enough for me to realise that Them Crooked Vultures will be playing at the other end of the arena shortly afterwards). Even so, Jesse Hughes and co walk straight out of the 70s to put on a show that properly loosens up the crowd, starts the party and probably converts a fair few new fans. A triumph.

It feels like Josh Homme is casting a large shadow over this day, such are the number of bands that he’s got a stake in (not least headliners the Arctic Monkeys). It’s appropriate, then, that ex-Distiller Brody Dalle’s Spinnerette are next up. I’d heard rumours of a more Queens-sque sound from this outfit: unfortunately, the rumours ain’t true. In fact Spinnerette sound more like Belinda Carlisle. The punk aesthetic of the Distillers has been well and truly abandoned, and with it any sense of distinctiveness. Dalle could be any throaty rock chick, this could be any journeyman rock band. It’s a real shame. 65daysofstatic are a different kettle of fish entirely. Repeatedly feted for their live shows, they don’t disappoint. Their set mixes favourites from ‘One Time for All Time’ and ‘The Destruction of Small Ideas’ with equally colossal new tracks, and overall gives the impression that the world is pretty much about to end – and that that may not be a bad thing if this is the soundtrack. The Prodigy hit the main stage with more fury than I’ve seen in them for years. Since the glory days of Fat of the Land, they’ve risked becoming parodies of themselves – circus electropunks, rather than furious pioneers. While this set doesn’t quite reach the heights of 1998’s apocalyptic Reading set, it marks a serious return to form. Saturday, sadly, provides slim pickings for those about to rock: even so, there is one surprise, and he clutches a battered acoustic guitar. Frank Turner’s Billy Bragg plus hardcore act has always been a difficult one – typically hugely effective in small venues when it’s just him and his guitar, but less so when playing with a full band. Today, however, it makes perfect sense: songs that previously sounded mawkish and cheesy somehow make sense with a tentful of people singing along: indeed, the sound of the crowd singing along to obviously intensely personal songs like ‘The Queen is Dead’ even brings a tear to my eye. Just the one, mind.

Ultimately, though, it’s all about Sunday - especially with the Deftones and Faith No More both playing. We’ll get to them in minute, though: first up is the bouncy post-hardcore (sorry, fight-pop) of Dananananaykroyd. It’s the perfect antidote to Saturday night’s hangover, with the infectious chirpiness of singers John and Calum and the novelty of the ‘Wall of Cuddles’ (a wall of death with hugs, not punches) providing some much-needed go juice.

Ghost of a Thousand

I think Danan should be having some words – or at least a cuddle-off – with Ghost of A Thousand, who blatantly steal the idea in their subsequent set. Even so, GoaT throw up a masterly performance, with material from both albums making an appearance and sounding simply awesome. For my money, it’s these guys, not Gallows, who are leading the charge for UK hardcore, and they need to be witnessed.

Mid-afternoon means it’s time for the long-awaited Deftones set – and what a set it is. The (hopefully temporary) absence of bassist Chi Cheng adds a bittersweet edge to proceedings, but the band still pull out an astounding performance, with ‘Around The Fur’-period tunes taking the fore – particularly a closing double-header of ‘Be Quiet and Drive (Far Away)’ and ‘Headup’. It’s a triumphant return, and one which hopefully will continue for the foreseeable future.

At the end of the day – literally and figuratively – it’s Faith No More who everyone’s here to see, and they don’t disappoint. Emerging to the strains of ‘Midnight Cowboy’, Mike Patton, Roddy Bottum et al put on a simply superlative performance.

Drawing material from throughout their career, but with an emphasis on ‘Angel Dust’ and ‘King for a Day, Fool For a Lifetime’, the band veer from furious rage (notably a scorching version of ‘The Gentle Art of Making Enemies’) to crooning (‘Easy’ is quite possibly the most entertaining singalong I’ve had in quite some time) to parody ­(the Eastenders theme, anyone?) with panache, style and above all what appears to be sincere happiness at playing together onstage again.

That sense of fun extends to audience interaction, too: they’re in a playful mood, not least when Mike Patton lightheartedly berates the crowd for not knowing the lyrics to ‘Midlife Crisis’. To be fair, that’s at least partly down to the fact that this is, at heart, a nostalgia trip for both band and audience: everyone knows we’re all here to hear them play the hits and fan favourites, ‘Epic’ included, and that makes it an experience with little pretension, no expectation of new musical adventures and one that’s a whole load of fun. Indeed it’s rousing set closer ‘Just a Man’ that really sums up the experience for me: yes, they’re just five men. But, it’s clearly evident that, whenever they’re on stage together, they’re more than the sum of their parts: they’re Faith No More, and that’s something pretty special, even 11 years later.