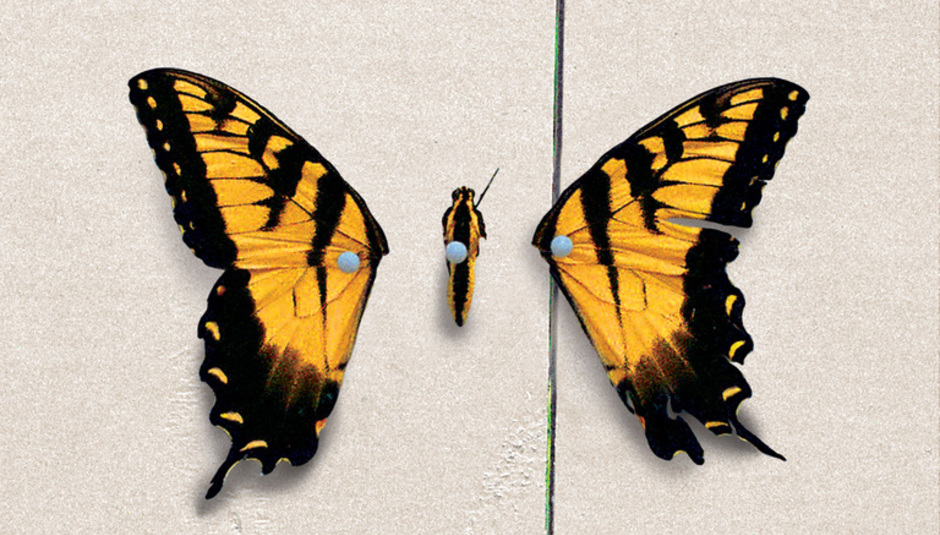 brand new eyes (yes, all in lower case!) is the forthcoming follow up to the 2-million selling Riot! from the female-fronted emo/rock band Paramore. DiS was very excited to get a first listen to it and the following text is what DiS Editor Sean Adams made of the record based on one listen at their UK record label offices.

The album opens with a chuggier bass than anything on the previous record, wrestling with lots of surprisingly complex math-rock time changes - almost like Mars Volta at full-on melodic crescendo but with Hayley doing those big rising AFI-like vocals. The breakdowns give light relief before gigantic drum rolls. The lyrics are all about pushing you away, with the phrase "don't come any closer!" repeated quite a bit.

Lolita-ish Stefani-esque vocals over what could be No Doubt at their most brash or Alkaline Trio at full (pop) tilt. So far so much more intense in both an ornate and chaotically complex way, than the previous album. The big lyrical statements are still present, with lines like "ignorance is your new best friend!" This track is the first single from the album and the 'Ignorance' video is on their website here.

And then it drops off to a solo rhythm guitar line and in come some much more adroit drums and a big blink-182/Get Up Kids chorus. Lots of melodically stuttered "br-break-break it off" repetition makes this one sound like a live favourite in waiting.

Hayley declares "bury the castle" and then there's a "buh-buh-buh-nuh-nuh" that Lostprophets and Panic at the Disco would be really proud of. The press release says the album is "breathless", I guess that could also be read as unrelenting because so far the drums on this record are a little more like a barrage of noize crashing down on you (we're called drowned in sound, so this is a good thing!). There are acoustic versions of this track on the web from an MTV session they did but it sounds ten times bigger and better than that on the album!

Hayley is sounding cutesy as a big ball of riff builds and builds, then falls away [insert huge first verse here]. This one sounds like the credits to a college rock movie, as the camera pans on zooming cars whilst monster trucks rain from the sky.

Acoustic guitar o'clock! This is a lush burst-hearted ballad. Hayley maybe has a little bit of the Avril Lavignes about her on this one but THIS IS NO BAD THING. "You are the only exception...." she coos before the band bring in the drums and strings.

A jetstream splicing riff lurches from the calm and the bass dur-nurr-nurrs like My Vitriol at their most emo. Lots more F-U-right-back lyrics on this one, with lots of lines like "I feel no sympathy" flittering around this tamed beast of a track.

'Looking Up' is a little more like Paramore's trademark epic-rock-pop bigness with moshpit-pausing breaks but the song carried by the vocal (or if you wanna get technical, the top-line melody). Throw in some "wuh-woah-oh-oh!'" and you have a Sunny D addictive 'Misery Business'-like feel good melodramatic popular song.

Where The Lines Overlap

An inaudibly quiet guitar line and then THWACK! - we're whacked with more racing rock joy. Break. "Oh-oh" and THACK. Pause. And they bring that riff back twice the size, like a worm you've chopped in half. This is an 'in love' song with lines like "no one is as lucky as I seem." In essence, this one sounds like an obvious call and return for their huge live crowds but also a spikey attack at the echo-chamber of the media, as the lyric continues "...I've got a feeling if I sing this loud enough, you will sing it back to me!" In essence, this is probably what would happen if Refused wrote pop songs for Kelly Clarkson.

Things fall away to a slight and quite special acoustic moment. It's genuinely really-really lovely with a tiny bit of kick drum toward the end. Lyrically it wanders around dragging its feet in diary-angst but that's part of the reason why they mean so much to their younger fans and why they're such a special guilty pleasure - "we just go in circles, pain is just a simple compromise... A broke heart, a twisted mind."

This is the big Evanescence falling down a black hole album crescendo. Big bass, with lots of space to let everything breathe before a capella bits and then huge tumbling drums and face-shaking riffs. And then insert feedback 'til fade.

The album also features a bonus track which is 'Decode' taken from the Twilight soundtrack which sounds exactly like this:

First Listen Summary: This is quite a brave step in an explorative direction from a band who could have delivered a much more accessible, instantly-gratifying record with 10 guilty-pleasure tracks like 'CrushCrushCrush'. Instead, this is a record that sounds like every listen will be more and more rewarding: 8/10. brand new eyes is released in the UK on September 28th (a day later stateside) via Fuelled by Ramen. For the brand new eyes tracklisting and more info click here.

In Photos: The Voluntary Butler Schem...