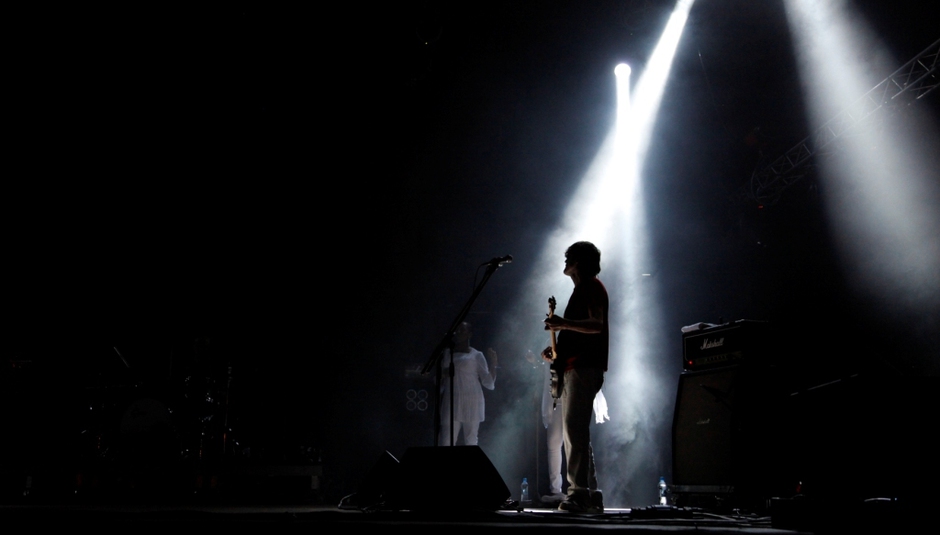 It was with a mixture of near-crippling shame and childish glee that DiS accepted Polish musician and festival organiser Artur Rojek’s invitation to come out to the fourth edition of his OFF Festival, held in the town of Myslowice in Poland’s mining heartland of Silesia. Shame for the fact that I’d clearly been picked from the fertile tapestry of UK music journalism on grounds of Polish ancestry, when I’m basically the world’s shittest Pole. Glee for the fact that the line up was awesome and we were being offered a free holiday. The glee won out.

OFF is a four-day event: two shoulder days of indoor gigs in the town of Myslowice, two ‘main’ days at Slupna Park, a curious place that plays host to a training college for firemen, many of whom could been seen wandering the site in small groups, looking generally ambivalent about indie-rock as a concept.

Myself and DiS photographer Helen Boast arrive too late on the Thursday night to catch any of the programme in town, though we swear we spotted These New Puritans in our hotel restaurant, having dinner at precisely the time they were supposed to be on stage. We decided not to take them to task, and get sloshed with Filter magazine instead (unquestionably the hardest-drinking Americans we had ever encountered).

Matters get properly underway on the Friday. The site is small and neat, with an apparently quite delightful camping area (a film crew from Vice were actually a bit freaked out at how well-behaved it all was). Anybody hoping for some austere Eastern European quirks would have been mildly enthused: drinking is restricted to a bouncer-encircled bar area, and though it wasn’t hard to smuggle out, it was still way more sober than a British festival. Or basically any festival. All the main stages have a massive additional set of barriers running between the mixing desk and the front barriers, which was kind of annoying, but you got kind of used to it after a while.

Something like the crème da la crème of Polish indie takes part, though with typical Western blinkeredness we managed to miss all of them bar loon poppers BiFF (which was possibly quite helpful when a member of our party later copped off with the frontwoman). In fairness, the Western acts are the focus, and the timetable across the five stages becomes dominated by foreign names after about 5pm. The only other local names we caught was a pinch of Cool Kids Of Death (who I suggested sounded like Kiss Me...-era Cure, much to the scorn of anybody Polish within earshot) and Maria Peszek, an actress turned singer whose painfully muso backing band belied a fascinatingly taboo-busting lyrical approach that only really made sense when fully explained by a native, but certainly won us over.

Having been at a French festival a month previously where the whiff of paycheck collection lay heavy around some of the foreign acts, the most striking thing about most of the Western musicians’ approach to OFF was how rabidly enthusiastic they were. This went triply for Handsome Furs’ Alexei Perry, who enthusiastically yelped about how this was their sixth gig in Poland this year, was verging on tears of joy throughout a Face Control-heavy set, and was either the only person at the festival noticeably on drugs, or if she's like than anyway, should never, ever be allowed any form of intoxicant ever. Delightfully, unexpectedly rock’n’roll, if sadly light on Plague Park material. By and large, though, this is a first Polish gig for most bands, and they seemed pretty pleased about this, most notably Damian from Fucked Up. His fanboyish reeling off of a list of Polish punk groups did much to endear the Canadians to the audience, though their walloping melodic hardcore and unabated enthusiasm would probably have done the trick anyway. Elsewhere particular high grade awesomeness was served up by HEALTH (they really have taken a leap forward – the concluding ‘Severin’ is particularly stunning, its repeat chant “all we lose we learn from you” thundering out in a drum-heavy roar of glitter and blood), Marissa Nadler (the full band arrangements of her songs feel more convincing than on her UK tour), Spiritualized (this same semi-greatest hits set bored me to tears at ATP – maybe it just needs the night air), Crystal Antlers (who attack the thin Tentacles material with the bleak narcotic frenzy of the way superior EP) and The National, who pay tribute to John Hughes with a cover of ‘Pretty In Pink’, and rattle off a considerably rawer set than one might expect (probably largely due to the fact Matt Berninger manages to imbibed pretty much the entire contents of a vineyard before taking the stage). Good times.

Obviously DiS wasn’t flown out, put up in a hotel and bought rounds of frightening Polish shooters with the intent of our concluding OFF was bobbins, but even accepting our inherent bias, for the equivalent of just under £20 a ticket and £1 a beer, the two day ‘proper’ festival would appear to make OFF a fairly solid contender for Europe’s best value quality indie fest. Sure, it's not going to rival Primavera anytime soon, but that’s a far bigger operation in a much more expensive country. Ryanair flies from Stansted to the nearby Katowice airport, and it's all easily combined with at least a light mooch around the rest of Poland (for starters Krakow is only a few hours away).

It’s also worth grabbing a ticket that covers the surrounding days of gigs, where the action is relocated to indoor venues in Myslowice’s pretty town centre. It’s a warmer, more intimate atmosphere, and Olafur Arnauds' festival closing set in a church was amongst OFF 2009’s more magical moments, a stately upward procession of silvered strings and crystal piano filling the old building like a giant musical snowshaker.