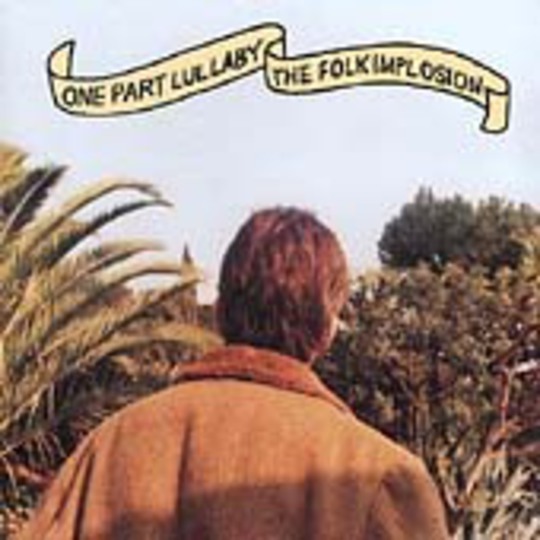 A compelling and musically inspiring album from the US musical duo.

In the wake of Lou Barlow’s recent decision to pursue yet another change in musical direction, I believed it would be appropriate to take a look at one of his past offerings- and the choice was hardly limited! Choosing to ignore his work in both Dinosaur Jnr and Sebadoh, I opted for the collaboration with fellow versatile musician John Davis under the name of 'The Folk Implosion.'

‘One Part Lullaby’ the duo’s second proper album together, was released last year on Domino records, with only minimal promotion and pre-release hype. Only a handful of national TV appearances and the odd radio session, which included the likes of an Evening Session solo acoustic performance from Lou himself, acted as album promotional material. Apart from the relatively low-key success of single ‘Free To Go’, the album remained mainly unnoticed by the majority with the obvious exception of the already firmly established ‘Folk Implosion’ and, in particular, Lou Barlow fan base.

Primarily this album may be viewed by mainly as ‘Lou’s’ Album, in such that he acted as the primary lyrical force as well as the vocal and instrumental front man. In fairness. John is often seen to be just an accomplice, drafted in for the percussion, some guitar work, the odd backing vocal and an inkling of lyrical inspiration. The fact that Lou performed on Lamacq Live on his own was seen as symbolic of the duo’s working arrangement, not to mention a sign of things to come.

On a whole, the album offers a lot in terms of musical context and instrumental set-up. Attention has been paid to the smallest of musical details, ensuring that the album combines a range of musical experiences and styles not to mention a whole cavalcade of musical instruments including the likes of Psaltry, Dulcimer and a Cookie Sheet! And for those of you who perceived John just as an accessory in the musical proceeds, ironically it is the area that he masters, which acts as possibly the strongest points of the album, deeply shaping and creating many of the moods and feelings. In truth John’s percussion throughout is exceptional in every detail, especially in programming. It adds musical depth and certainly creates new levels of interest in most if not all of the tracks.

Although throughout the majority of the album the quality of each track is superb (bar a slightly disappointing number entitled ‘Chained To The Moon’) there are four major stand out tracks, each that, for some reason or another, have to be set apart from the album context and reviewed separately:

‘My Ritual’- This is a hideously clever song, fuelled with subliminal meanings and pensive moments not to mention abundant irony. A perfect opener, setting the ambiguous and some might say complex tone to the album.

‘Free To Go’- In my opinion this was possibly the single of the summer, shame it went relatively unnoticed. Charting teenage life in more than ways than one, this number may act as the soundtrack to those adolescent years with the message hidden in each and every line seeming so relevant, so applicable. That aside the musical context is brilliant, build around heavy percussion and striking guitar riffs this track speaks volumes, both uplifting and thought provoking at the same time.

‘Merry-go-down’- This has to be my favourite track off of the album. In truth this is ‘The Folk Implosion’ at their best, and it rivals such previous efforts as ‘Natural One’. Probably the most folk inclined of the lot, it is soothing and equally gorgeous, yet it presents this hazy feeling of melancholy in a very subtle way. Light guitar work and gentle tittering percussion create this magnificent ambience, presenting the listener with an abundance of different feelings while bombarding them with a thousand miscellaneous musical ideologies. With lyrics boarding on ambiguity, this track represents the very best of the pensive and magically discoverable side to the album.

‘No Need To Worry’ Certainly a pensive moment with lyrics that literally leave you musing for hours. Throughout, the vocal tone is soft and certainly embracing, but it is the musical context that acts as the standout feature. Built around striking, rhythmic, rolling yet light and undulating percussion, a deep, responsive, yet equally driven bass line, all intermingled with a network of guitar meanderings and string arrangements, this track just blends together perfectly. All the differences on the instruments and their set up are delicately pulled together by Lou Barlow’s vocal work; certainly this is one of the album highlights.

A truly compelling yet equally overlooked album that I believe should be found a suitable place in everybody’s record collection. The album remains of the greatest interest no matter how many times you listen to it due to all the instrumental interest. In fact, every new listen opens your mind to another previously hidden area of ‘The Folk Implosion’ It is an album that can fit with all moods and feelings making it a truly inspirational choice.