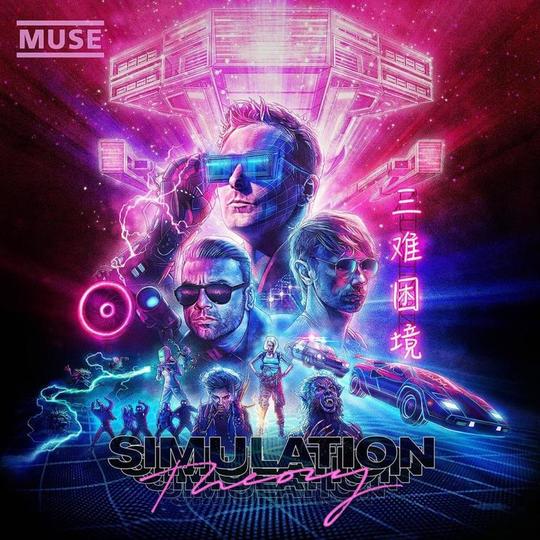 The age-old question ‘are Muse taking the piss?’ is surely at least partially affirmed by the cover art to eighth album Simulation Theory. A sort of knowingly preposterous Eighties movie poster homage featuring very silly renderings of the Devonian trio in rad shades, it would be a conspiracy theory too far to suggest it was meant to be serious, and strongly suggests that just maybe some of Matt Bellamy’s more outré pronouncements about aliens and whatnot were simply him having a laugh.

Muse’s record sales follow a fairly familiar pattern for the contemporary arena rock act: their late Noughties albums sold millions; their most recent two (2nd Law and Drones) enjoyed high chart positions (Drones was their first US number one) but sold comparatively few actual units. That is download culture for you, and I wouldn’t feel too sorry for Muse – as one of the last generation of rock bands to sell actual records, they are set for life as a live draw (just so long as they remember to play ‘Knights of Cydonia’).

It also means the stakes for a new album are comparatively low. Squint, andSimulation Theory is a light leftfield turn for Muse, but one they can make fairly comfortably, because Black Holes and Revelations-size sales are simply not a realistic prospect anymore. At the same time, it’s hardly a Kid A-stye gauntlet chucked down: fans are not going to freak out when they hear this stuff live.

Simulation Theory, then, sees Muse take the Eighties/Prince inspirations announced fairly flagrantly by ‘Supermassive Blackhole’ et al and finally spin an entire album out of them. And you know… it’s pretty good fun. I have no doubt there are those who will be dismayed by the lack of riffage, but like their heroes Queen, Muse are a hard rock band who don’t actually particularly need to be a hard rock band: their big, tuneful songs stand up just fine sans guitars.

Starting with the jackbooted electro pomp of ‘Algorithm’, proceeding via the heart attack disco of ‘Pressure’, and concluding with the slick, bombastic growl of ‘The Void’, Simulation Theory is a huge, cokey record that fundamentally sounds exactly like Muse, while almost entirely ditching the main instrument associated with them. These are enormous, slick melodies with a seductive retro sheen, and possibly some lyrical guff about being a robot. If anything, the change in palette only partially serves to mask a swerve towards convention: yes, there’s some of the usual paranoid shenanigans, but ‘Something Human’ would appear to be a ballad about how tough touring is, that’s only just salvaged by an enjoyably wonky vocal effect on the chorus; ‘Get Up and Fight’ is a bit of a nadir, a power ballad featuring almost all of the album’s guitar quotient that sounds like it was specifically written to keep synth-phobic American radio stations happy.

Simulation Theory is, on the whole, pretty lightweight, but it’s got a definite elan to it that indicates Muse are still probably having fun doing this: it is considerably better than the sort of here-is-some-product-to-justify-a-tour work that a lot of bands toss off 24 years into their career. Like I say, Muse already have their hits in the bag and could put out pretty much anything now and not dent their festival headline status. Simulation Theory largely sounds like the work of band who have the pressure off and are just going with it – definitely not a bad thing.