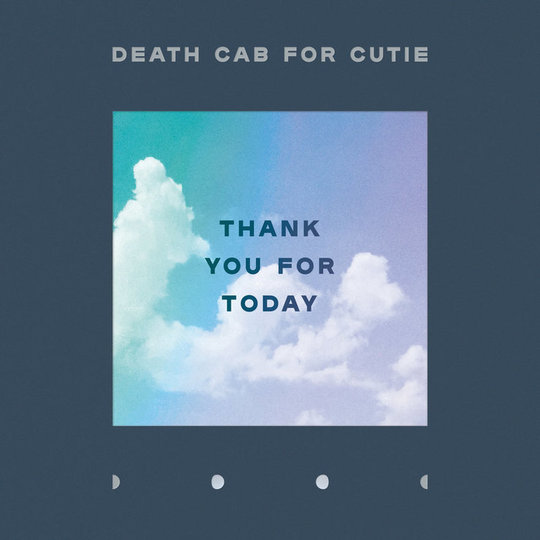 A lot has changed for Washington State’s Death Cab for Cutie since they rode roughshod into pop culture consciousness in the early Noughties, namedropped relentlessly on US teen drama The OC and soon becoming the darlings of floppy-haired emo kids everywhere. 2003’s Transatlanticism was the band’s high-water mark, a collection of fragile pop songs which catapulted them beyond their previous cult status. Cue international stardom, an A-list marriage (since dissolved), and four subsequent major label records.

Though frontman Ben Gibbard drew much of the attention in their breakthrough years, guitarist and producer Chris Walla was perhaps equally influential in their success, before calling it a day on his time in the band in 2014. Consequentially, new album – and ninth outing – Thank You for Today is therefore Death Cab’s first outing without their man behind the curtain.

Like a Premier League manager who’s lost their star player on the morning of transfer deadline day, Gibbard has responded by investing heavily in reinforcements, bringing in not one, but two new signings to bolster the ranks: guitarist-cum-keyboardist Dave Depper and keyboardist-cum-guitarist Zac Rae. The results are as might be expected with such synth-heavy acquisitions – there’s a noticeable electronic focus to a number of tracks, not least the FM-ready ‘When We Drive’, which groans under the weight of sine waves and metronomic rhythms.

Synth-pop credentials are aspired to elsewhere through a guest spot for Chvrches’ Lauren Mayberry on the anthemic ‘Northern Lights’, her stylish Caledonian soprano adding considerable flair to proceedings atop propulsive drivetime rhythms.

It’s not all electronic though – there’s rootsier fare on offer too, via lead single ‘Gold Rush’ which boasts a slide guitar stomp that’s more Mississippi Delta than Pacific Northwest. But as well-crafted a piece of musicianship and production as it is, it also lays bare contemporary Death Cab’s weaker elements – in trying to compensate for the absence of one of their key instrumental talents, Gibbard’s eye has been taken off the ball somewhat when it comes to the lyrics ("Digging for gold in my neighbourhood / where all the old buildings stood", just one of the couplet clangers on offer here. See also the nautical headscratcher: "You used to be such a delicate kid / A lonely fish in a sea full of squid"’)

Similarly off the mark is the production – the record’s glossy sheen coating nearly everything in sight, allowing few of the beautifully fragile arrangements that Gibbard’s voice is so perfectly suited to. The only real exception is impressive closer – and standout track – ’60 & Punk’, a cautionary tale of refusing to grow up, focused around beautifully wavering piano lines played in waltz timing. It’s an affecting three-and-a-half minutes that is one of the best things they’ve done in years, but sadly very much an exception here.

Nine albums in, Death Cab for Cutie are just about holding it together, but you have to wonder if the title ‘Thank You For Today’ belies nothing more than a grateful acknowledgement of continued existence.