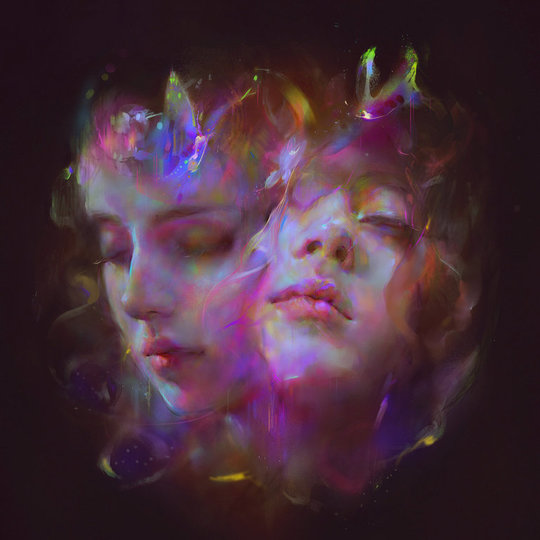 I’m All Ears opens with ‘Whitewater’, a thunking great ice-bucket challenge of an instrumental that answers that age-old question: 'what if the soundtrack to Nicolas Winding Refn’s Drive had been written by Godspeed You! Black Emperor?'

Fans of sentences that whimsical and music that eclectic would have found themselves right at home with Let’s Eat Grandma’s debut record, I, Gemini.

Released in 2016 by childhood friends Rosa Walton and Jenny Hollingworth were 16 and 17 respectively, it’s a record stuffed to breaking points with ideas – some diabolical, others beautiful. Knowingly naïve freak-folk interspersed with xylophone, ukulele and rapping. Discordant recorders wheezing directly into your eardrums. Haunting harmonies and sirenic screams.

Songs with titles like ‘Eat Shiitake Mushrooms’, ‘Chimpanzees in Canopies’ and ‘Welcome to the Treehouse Part II’. You get the gist.

All of which is to say, is that depending on your taste for that kind of home-brewed, distinctively British weirdness, I’m All Ears is either a massive leap forwards or a sad lurch towards the middle-ground.

To these ears though, the towering prog-pop of lead single ‘Hot Pink’ is a thrilling declaration of renewed intent unlikely to be bettered this year. Co-written with SOPHIE and Faris Badwan, it sees Walton and Hollingworth artfully tackling gender stereotypes over production that zigzags violently between ambient sugar-rush verses and an ‘ab-so-lute scenes’ banger of a chorus. It twinkles. It clatters. And it sticks a rocket up everything LEG have achieved to date, setting expectations for the remainder to Pavlovian levels of salivatory excitement. I’m All Ears indeed.

Just as much of an achievement, is that the pair manage to keep that pace up three tracks in a row.

‘It’s Just Not Me’ is mellower and more straightforward, but its production plays a neat trick in mirroring the lyrics focus on dawning realisations. As the pair pick apart the power of discovering your feelings are reciprocated – whether they be romantic or platonic – the cloudy verses are steadily peeled away, before being punctured by a buoyant, CHVRCHES-esque chorus, full of hope and self-belief, “I can’t fail to believe / when you’re feeling the same way”.

‘Falling Into Me’ continues that dissection of relationships and self-belief, but adds further strings to the duo’s bow in the process. Arpeggiating guitars, spacerocket synths and thundering drums steadily build momentum through each round of verse, pre-chorus, chorus, until by the soaring outro, the track has grown so expansive it starts to feel undeniably momentous. Bolstering that sensation are some of the record’s best lyrics - some evocative “I pave the backstreet with the mist of my brain”, others intoxicatingly direct “We got this” – but always highly perceptive.

With their shared titular focus on “me”, these two tracks share a focus on discovery of the self – a major theme for anyone that’s just turned 19. What nuances LEG’s take on it beyond their increasingly sophisticated song-writing and their trademark quirk though, is the tension between the emotional and technological.

Both tracks briefly linger on the role phones play in our emotional landscapes. “I don’t wanna say goodbye / Guess I’ll see you when the screen is vibrating” from ‘It’s Not Just Me’, zeroes in the hollowness of these digital interactions, bringing the ones we love closer to us, but never quite putting them in reach. “You left a dent in my home screen” meanwhile, bridges that gap, the physical impact on the device a neat metaphor for the psychological one created by the memory.

This duality of the technological vs. the organic continues throughout the record in the lyrics, but it’s predominantly mirrored in the songs themselves.

Instrumental ‘Missed Call (1)’ takes this contrast most literally, with the melody of an unanswered ringtone being picked out by strings. Broadly though, it comes to life in the two styles of songs the duo start to divide the record into after the opening synth-pop sprint.

‘Snakes & Ladders’ and ‘Cool & Collected’ take on a more meandering, psych-rock feel, complete with guitar solos in both cases. They’re well performed and show the breadth of the duo’s talents, but after spoiling us with the immediacy and import of the record’s best tracks, these sprawling noodle-fests can’t help but drag in comparison. Tellingly, ‘Snakes & Ladders’ only bursts into life once a wave of Final Fantasy VII synths burst into life halfway through.

The less said about ‘The Cat’s Pyjamas’ meanwhile, the better. From the punning name down, it’s a mildly unsettling throwback to I, Gemini era strangeness, as cheesy organs play out under an ASMR-triggering recording of a cat purring and gurgling. I don’t know, maybe I’m just more of a dog person.

That isn’t to say that I’m All Ears is only successful when the instruments come plugged in though. ‘Ava’ is a gorgeous piece of storytelling, the fracture of a friendship told over a deeply emotive piano-led ballad with a frog in the throat-inducing crackle in the background: “I know I have to accept this / But if she’d have let me / I’d be there / Once or twice or again / Again.”

Closer ‘Donnie Darko’ is the pick of the bunch though.

Clocking in at over 11 minutes it’s the longest track on the record by some way, but where other tracks descend into haze, ‘Donnie Darko’ holds your attention throughout, by sprinkling each ingredient from the record into one sumptuous whole.

The sludgy guitar of ‘Calm & Collected’, the synchronised chanting of ‘Hot Pink’, the twinkling pop of ‘I Will Be Waiting’, the raw emotion of ‘Ava’. All make an appearance at some point, and the result - to borrow a lyric from their debut album - is truly 'Let’s Eat Grandma, in full colour'.

A pair of 19 year olds that are well-versed in the power of delayed gratification, have grown through their experiences, learned from their mentors, and still retained a distinctive expression of themselves? Stick that in your pipe and smoke it Simon Sinek.