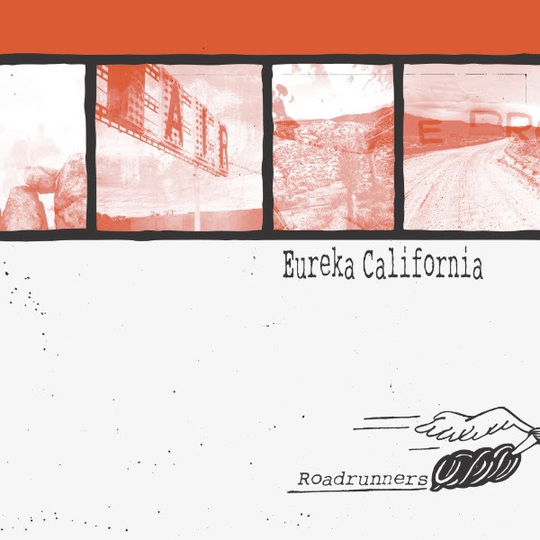 Many a classic tale begins in media res. Odysseus bobs onto shore after months of grueling seas; Nick Carraway stumbles into Jay Gatsby’s umpteenth block party attempt to woo the love of his life; Stingo drifts into Nathan and Sophie’s doomed romance when he settles into his salmon pink quarters. Tempests literal and metaphysical have blown our characters to this point, battered by so many setbacks that they can’t even act broken anymore – what could possibly break them now?

You probably wouldn’t think about classic literature the first time you stumble into Athens duo Eureka California. You probably also wouldn’t consider either half of the gang battered or beleaguered - Jake Ward stands on stage to shred guitar, tell clever jokes, and/or do both simultaneously, while Marie Uhler smashes the drums with a serene smile under her long matted hair. But Roadrunners (Eureka’s fourth album, FYI) tells the kind of stories that only seasoned travellers could share with the same gusto and wit. From the dreaded news drip of doom, to your last given fucks about dating apps, Ward has a riff and a punch line to match many a modern malaise – cos those struggles are real, and both he and Uhler have faced enough to know how to wrap them up and kiss them off in two minutes flat.

For Roadrunners, our heroes return to the scene with more firepower and tricks than ever. As with 2016’s Versus, Eureka journeyed back to the UK to record with MJ at Suburban Home; yet, while that glorious rocket launch blasted the pair’s volume to new limits, this go-round careens even further, bypassing Ward’s old acoustic confessions for an album of HITS, HITS, HITS. The chorus of ‘Mexican Coke’ slams so hard into overdrive, that millennials will think fondly of high school (maybe those Green Day fans were on to something!). ‘Over It’, meanwhile, is a classic Eureka banger, where Ward gets to show off his rock star athletics & Uhler can bash another refrain between her cymbals. Yet, even with that ammo locked and loaded, the duo temper their Superchunk-sized power with intrigue – measured strums and echo-y verses signify braver journeys into the studio, the likes that remind you of those deep Buzzcocks cuts or Colin Newman’s solo stuff.

Yet, what adventurer wouldn’t emerge from their trials and tribulations without some pithy words of wisdom? Eureka have staved off their share of fake friends and dumb dudes, and both Ward and Uhler have learned to cut straight to the bone. Roadrunners is chock full of shots fired, which only make you fall harder for wicked tunes that’d you wanna sing along to anyway. The extreme surfin’ bird ‘JJT’ features the drummer’s first Eureka lyric, about how so many 20-somethings (including herself) can nearly work themselves to death for barely minimum wage. ‘SWDs’s gut-punches dude-only bands with just one verse: ”why should I ever care again / about a band made up of four or five straight white men?” These are the pointed reflections of travelers concerned with the world around them – and especially this precarious moment, as ‘Threads’ reminds us of our trigger-happy commander-in-beef: “I’ve got the launch codes / it’s just a nuclear option”.

In most cases, though, Ward balances his loaded anecdotes with sneaky allusions and punch lines. A sly jab at Pavement prefaces the windswept resolve of ‘Perfect Grammar’; Ward slips a Cowtown lyric into ‘I Can’t Look In YR Direction’ with clever timing; he even references himself in ‘MKUltra’, stacking the chorus of a tune from 2014’s Crunch on top of the last refrain. Where these surreptitious nods often make you feel dumb if you’re not in the loop, Eureka never fly over yr head, because you’ll definitely recognise some lousy friend archetype anyway. You might even see your disappointed parents in “Perfect Grammar”: “ain’t it hard when you fall below your expectations / and I got no expectations.”

All this and more affirms that our intrepid duo has seen more of the road than many a hyped new gang. So you might dial in at media res, but that’s OK: Eureka’s next great conquest lies not in their past, but just beyond the green light on the horizon.