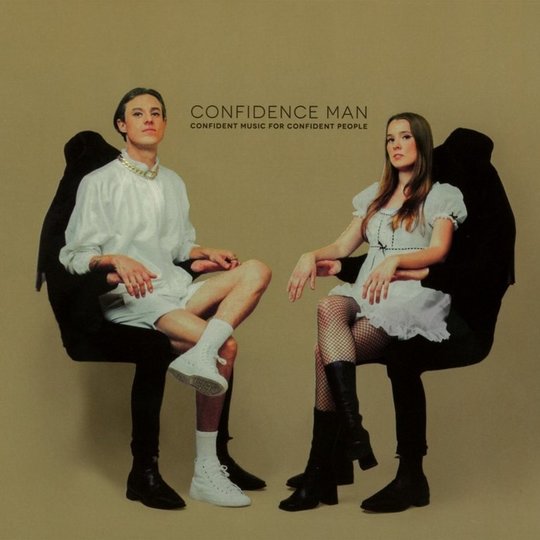 Sometimes it only takes one listen to a particular song for it to make an immediate impact. 'Anarchy In The UK', 'I Feel Love', 'Dog Eat Dog', 'You Trip Me Up', 'Pearly Dewdrops Drop', 'You Made Me Realise', 'Motorcycle Emptiness' all fall into that category, and so did 'Boyfriend (Repeat)' the first time I heard it nearly 18 months ago. A booking agent friend played it prior to a Christmas night out insisting both song and band would dominate the following summer's music festivals. With a handful of highly entertaining and totally unforgettable shows at The Great Escape and Glastonbury in the bag, he wasn't far wrong either, and by the close of 2017 Confidence Man had become many people's favourite new band.

Having signed to Heavenly Recordings at the tail end of 2016 only the most obtusely negative soul would bet against them delivering an album that will be held as a standard bearer for the year. It's probably no coincidence that many of the greatest pop records were made in the most adverse of times and Confident Music For Confident People is no different. As a means of escape it's second to none. But as with the best of its kind, it also leaves an impression that's built to last, and more importantly outlast the competition.

They say genius steals whereas talent borrows and while such a lofty appraisal might be slightly premature for a band still in their embryonic phase, Confidence Man take the best bits from some of your favourites and at times, manage to construct something even better. The four-piece - better known by their respective pseudonyms Janet Planet, Sugar Bones, Clarence McGuffie and Reggie Goodchild - have channeled those aforementioned influences and ideas into an album that aims to be this generation's Sound Of Silver or Screamadelica. No, really.

Sure enough, there are reference points galore from the moment 'Try Your Luck' kickstarts the record into a dizzying mix of Peaches style sleaze ("I must confess, I was sleeping with your ex cos I heard he was the best") topped off with beats straight out the DFA stable. Indeed, go through every one of Confident Music For Confident People's eleven tracks and something will appear instantly recognisable. But then that's the whole point. Confidence Man don't aim to reinvent the wheel. Instead they've replaced the spokes and inflated the tyre on the existing one and it works an absolute treat.

The aforementioned 'Boyfriend (Repeat)' bears all the hallmarks of The B-52s, LCD Soundsystem and Deee Lite thrown into a blender and mixed for one of the 21st century's most insatiable musical moments. Imploring all and sundry to "GET DOWN!" to the point where it's now become a catchphrase synonymous with all things Confidence Man. While 'Don't You Know I'm In A Band' is Right Said Fred's 'I'm Too Sexy' for the iPad generation. Sugar Bones taking the lead vocal with a song mocking every self-important "Do you know who I am?" wannabe you've ever met.

'C.O.O.L. Party' celebrates hedonism like The Waitresses celebrate Christmas while 'All The Way' and 'Catch My Breath' take us back to a time when rave culture made it okay to wear oversized hoodies and 40 inch flared jeans with acieeed patches sewed on the pockets. The album's coup de grace belongs to 'Out The Window', a song that encapsulates the highs and lows of an early morning comedown from the night before. Starting off like The Breeders' 'Cannonball', it eventually mellows out into something Andrew Weatherall would undoubtedly be proud to call his own before the enormous "I only want a good time, time to free my mind!" refrain takes it into Screamadelica territory. It's certainly an eye opener for those still unconvinced whether Confidence Man are little more than a novelty act that if anything, elevates the band into learned waters.

'Bubblegum' and 'Better Sit Down Boy' up the pop ante once more, while album closer and live favourite 'Fascination' once more delves into a time when the Hacienda was the central hub for music. Confident Music For Confident People is exactly what it says on the tin. It's also the most unashamedly addictive record you'll hear all year. Get Down!