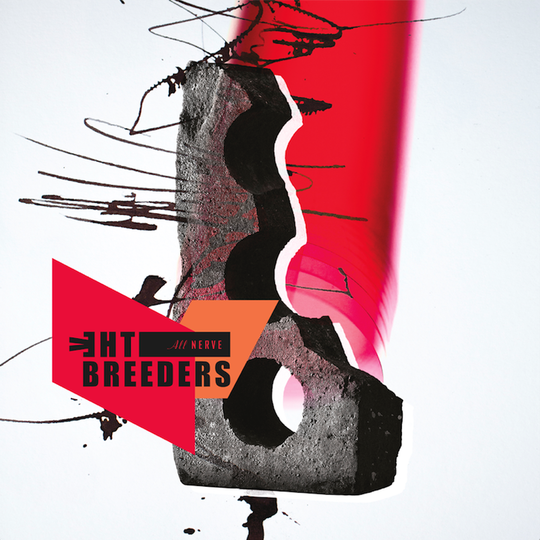 All Nerve is probably the most apt title for a Breeders record yet. It summons their zero-fucks-given composure but also doubles as a glimpse of the indelible tenderness evident in some of their best work. As a klaxon call of their return, 'Wait In The Car' undoubtedly leans towards the former fancy. A decade on from their last long player the band reappeared late last year with this absolute ripper. It ploughed through a glut of incidental white noise like a rocket while generating the distinct feeling of being slapped about the chops and told to quit your whining. In short, bloody marvellous.

With tumbling riffs and clattering percussion fueling the sheer cheek of it all, and after a decade of absence, fans were greeted with the mischievous order, “wait in the car.” Seriously? After ten long years, wait in the car? But then in all likelihood most had acquiesced with that first glorious bellow of, “Good Morning!”, if they knew what was good for them anyway. And besides, Kim Deal’s “got business” don’t you know: to be a breeders fan is not to be needy.
br>

Duly, the follow-up to that florid lead single is perhaps where the band really get down to it. All Nerve taps into a vulnerability that made a song like ‘Off You’ so delicately exquisite it could damn near bring you to tears. It’s really quite bracing to hear Deal sing such an utterly direct and unguarded a line as, “I wanna see you / especially you / you don't know how much I miss you.” And equally thrilling to witness her rip it all up: “I won't stop / I’ll run you down.” From the oblique lyricism of Pod through Mountain Battles’ foreign language capers, she’s always had a crafty knack of pulling the rug when you least expect it. As ever, the specificity of the song's meaning remains elusive but the effect is anything but vague, and anyhow, “strategies are for punks."

Musically, the band is entirely in tune with the sentiment, arching then yielding as the lyrics bristle before softening. And lest we forget, this is the first record from the Last Splash line-up since that defining record landed in 1993. Returning members Josephine Wiggs and Jim MacPherson stand as one of the most distinctive rhythm sections of modern times and their presence makes for a band in rude health. MacPherson demonstrates he’s is a drummer of thought and thew, whether he’s powering-up the crescendo of 'Howl at the Summit', or driving the anxious rhythms of 'MetaGoth.' Equally, Josephine Wiggs is on commanding form, markedly on two tracks for which she bears writing credits (an ominous rumble on 'MetaGoth' and the snaking bass of 'Skinhead #1'), not to mention everywhere in between.

However, it’s perhaps on the band's blazing cover of Amon Düül II’s ‘Archangel Thunderbirds’ that the pair is most essential. They tether the track with a mouth-wateringly powerful groove while the Deal sisters let rip on one of psych rock's real gems. One guitar is circular and hypnotic, the other zig-zagging and spiky, meanwhile, Deal’s vocal levitates wildly over the whole heady mixture. Incidentally, it contains some of the trippiest lyrics ever committed to wax, "In shock corridors / people are standing / with their eyes in their hands / but they don't understand,” which rather handily sums up the bewildering sensation their version evokes. Following it up with the sublime ‘Dawn: Making An Effort’ is a stroke of track-listing genius. It cascades and glimmers around angelic vocals, soothing a come down gleaned from the hedonism before it and urging you to rest those heavy eyelids (or just pop them on the floor if you’re still reeling from the psychosis).

Rest is maybe something that folk imagine The Breeders have been enjoying since their 2009 Fate To Fatal EP. But that assumption would be to dismiss not only the crafting of All Nerve but also subsequent projects. Just last year Kelley Deal put out the brilliant R. Ring record, Ignite The Rest, and Kim Deal released a superb 7-inch series between 2013-2014, one of which reappears on this record. ‘Walking With the Killer' stands as one of her very finest; as such, anyone who thinks its inclusion is a bit of a cop-out can get in their box. If there is a minor criticism of the re-recorded version, it’s that it loses a little of muted, creepy character of the original, but nevertheless, it still prickles with the duplicity of the "dark star” narrator.

It turns the air eerie and yet there’s a sweetness to it, which is indicative of The Breeder's deftness at conjuring complex moods. Equally, despite Kim-anolog-head-Deal making a digital sacrifice for All Nerve, it hasn’t quelled the characteristic patina of her work. Idiosyncrasies like the lingering effects that pervade the stomp and float of ‘Spacewoman,’ tapping through the guitar reverb like a faint, broken transmission, remain intact.

All of which doesn’t even begin to touch on the mysterious ‘Nervous Mary,’ the wonderful skittishness of ‘Skinhead #1’ or the strange visions of ‘Blues at the Apocalypse’ populated by junkies and heroes bleeding out. Or even how All Nerve stands in relation to their other work, but then what would be the point of that? All Breeders' records sound entirely distinct and yet so wholly like themselves. Neil Gaiman recently [penned] (http://thebreedersmusic.com/bio/) a lovely essay on the band that, amongst other things, seemed to riff on the famed John Peel quote about The Fall ('they are always different; they are always the same'), further proposing that "music slices you in time." And it's true, the really good stuff does. As its title suggests All Nerve is never a passive listen, it shifts you, touches a nerve, and leaves a timely mark. Ah, The Breeders, an irreverent comfort; a band for the ages.