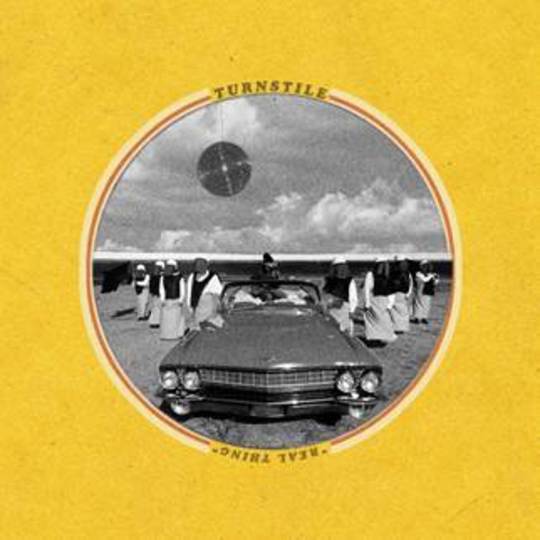 Since their 2010 inception, Baltimore, Maryland's Turnstile have risen to be quite possibly the most hyped hardcore-punk act in at least a decade. To some extent, it's not hard to see why given both older fans of the genre will appreciate their clear odes to the likes of Madball or Bad Brains, while younger fans will mostly just be excited that their generation of "the kids" are still actively continuing this fairly static scene. If one still has the youthful energy required to appreciate it, then Turnstile are a worthy torchbearer.

Their second full-length, Time & Space certainly at least shows the ambition both the band display and clearly many around them are enthusing on them. Produced this time around by Will Yip, who at this point is pretty much the gold-standard ears behind the entire genre (see: Touche Amore, Pianos Become the Teeth, Title Fight etc.), Turnstile's second full-length is easily the most impressive sounding record of their relatively short careers so far, without taking the energy away from their raw power. Meanwhile, Sheer Mag's Tina Halliday makes an appearance on album highlight 'Moon' while elsewhere Diplo (yes, you read that right) "offers added production" on the track 'Right To Be' (whatever the hell that means).

"Progression" has always been a notoriously slow notion when it comes to hardcore punk, and in fact, is often reviled, or in the more recent curious case of its move towards "Shoegaze" happens in trends rather than as some natural progression. Still, there's little denying Turnstile's sheer force, even if it necessarily your average listener's bag. The aforementioned 'Moon' for instance, is a highlight not because of Halliday, but because bassist Franz Lyons gets an opportunity to take the lead and his soulful vocals break up the head-punishing monotony of the record (& band, & genre) reminding one of Corey Glover of Living Colour, a band who, one imagines, are a sneaky influence on Turnstile.

Unfortunately, 'Moon' is Lyons' only contribution as frontman, which isn't to take anything away from the band's actual frontman, Brendan Yates, who is a serviceable focus-point, however, the track does provide quite a pleasant change of pace. No matter, however, as Yates proved his mettle on tracks like opener 'Real Thing' or lead-single 'Generator' where his top-line shimmers above the backing band's mix of playful riffs and groove-indebted basslines.

If there is a major criticism to be lobbed at Time & Space however, is that its one-noted nature will make it difficult for anyone outside of genre fans to want to reach out over and encourage a crossover appeal in the way that, say, Touche Amore have managed. It certainly is an impressive genre album with enough little touches to keep it distinct and interesting - handclaps, little funky music interludes, keys and phased guitar tones, all most certainly the fingerprints of Will Yip - however ultimately, it doesn't quite justify the tremendous amount of hype, not yet at least.