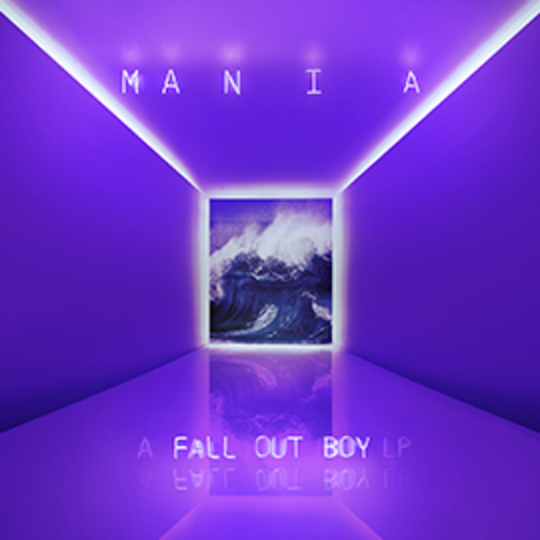 Only by scrutinising the context into which Fall Out Boy re-emerged from their hiatus can we begin to comprehend M A N I A’s existence. The Chicago foursome had been eager to ditch the emo tag since ‘Dance, Dance’ gained traction in 2006, and 2013 provided the opportune moment: EDM had swallowed the Billboard charts whole, and many of pop-rock’s twenty-first century goliaths had conceded defeat. The likes of Coldplay, Maroon 5, and The Killers had eagerly dropped their genre’s suffix, opted for fuchsia artwork, and realigned themselves with the winning team.

Patrick, Pete & co. willingly adhered to the new standard, with all the enthusiasm that it’s possible to muster when writing bland, cynical compositions with a thirst for the green stuff. The products, Save Rock and Roll and American Beauty/American Psycho (2015), completely deadened their imperfect-but-endearing idiosyncrasies, leant heavily on repetitiveness, and shoved everything on the mixing desk into the red. Both albums were nauseating exercises in calculated, overblown, angst-ridden electropop. Of course, both albums received platinum certification in the United States, so the change in tactics clearly paid off.

To M A N I A’s slim credit, it’s fascinating to hear a record that’s so profoundly inept for all its cynical calculation. Take the woefully misjudged opener, ‘Young and Menace’, for instance. The impact of Muse’s ‘Unsustainable’, their infamous foray into brostep, was so profoundly embarrassing this it should logically have torpedoed later attempts by other bands to incorporate the genre. An avalanche of clumsy drum tracking and overproduced power chords collapsing onto Patrick Stump’s hideously pitch-shifted vocals indicate he didn’t get the memo here.

‘Champion’, co-penned by Sia – another one of those 'mediocre smashes' – is inherently more listenable than ‘Young and Menace’, but it’s the lowest form of production line self-empowerment jock rock. The lyrics are coldly broad, pitched at the point where personal strife and TV coverage of major sporting events meet (“If I can live through this, I can do anything”), and there’s a disturbing faux-masculine energy suffocating the instrumentation. Worse still, it’s something the band used to shun quite effectively in their pre-hiatus form.

After a portion of the record, 'tropical house' inevitably rears its head on ‘Hold Me Tight or Don’t’, which is pop at its most cowardly and algorithmic. It’s a timely reminder, in the first month of the new year, that hammy impressions of dancehall by white Western pop artists should be left to die. There are only so many times you can hear the dun-DUN, dun-dun-DUN that’s opened too many radio hits in the past 18 months (Ed Sheeran’s ‘Shape of You’, Sia’s ‘Cheap Thrills’ & ‘The Greatest’, Clean Bandit’s ‘Rockabye’, Jonas Blue’s ‘Perfect Strangers’) before irritation gives way to apathy. Like much of M A N I A, it’s shamelessly unadventurous trend-baiting that kills the potential of emotional attachment.

Even if you leave discussions surrounding the appropriation of influential black genres by white artists at the door, there are still dozens of precisely selected and maddeningly exhausted tropes to take issue with here. The sonic palette is completely flat because – and I can’t stress this enough – every inch of this album is transmitted at maximum volume. Rather than containing peaks and troughs, the waveform of each track is a solid block, fit to compete in the Loudness War. Even the power-ballad ‘Church’, which contains M A N I A’s only unexpected twist courtesy of a brief time signature change, can’t wallow in its patient tempo. Folie a Deux’s ‘What a Catch, Donnie’ wasn’t emo balladry’s pinnacle but it understood dynamics at the very least.

‘Wilson (Expensive Mistakes)’ and ‘The Last of the Real Ones’ were likely written as Stump and Wentz listened through the wall as Imagine Dragons were recording Evolve. ‘Heaven’s Gate’ (another algorithmic ballad cranked up to 11) might as well have been composed this side of Ed Sheeran’s ‘Perfect’ in the hopes it could help relaunch the soppy waltz-ballad boom. M A N I A won’t suddenly ignite a revisionist outlook of Fall Out Boy’s career, but it does leave you pining for the earnest giddiness of their pre-hiatus material. This is a feeble gesture of benign, stadium-sized pop that’s been cynically constructed, artificially beefed-up and saturated beyond the point of listenability. It’s gonna sell millions.