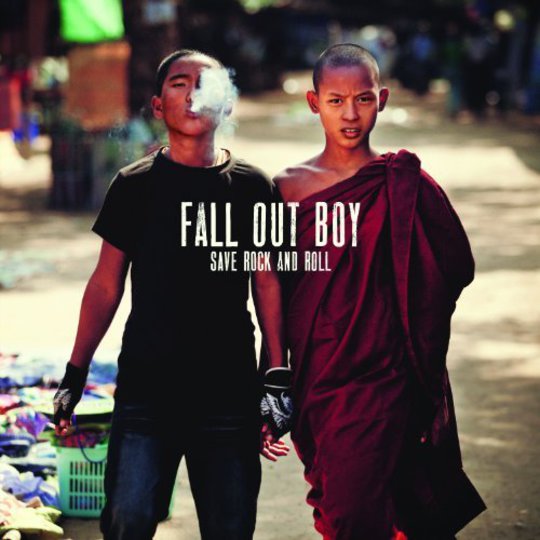 Despite protestations from the band itself, it's hard not to see Fall Out Boy's reunion as anything but an inevitable consequence of the considerable negativity both vocalist Patrick Stump and pop-punk pin-up Pete Wentz's solo projects attracted following FOB's 'indefinite hiatus' back in 2009. Whether deserved or not, the vitriolic flak both Soul Punk and Black Cards received from legions of former FOB fans was suggestive of several things, but most striking was the intense possessive entitlement that FOB seemed to inspire in their 'devoted' listeners. Stump, in particular, was subject to a savage backlash that saw him slammed for everything from his new musical direction to his dramatically reduced waistline.

In this context Save Rock and Roll deserves some credit; it's not brave, experimental, remotely left-field or dangerous, but it's also probably not what the swarms of angry Wentz-stalking Livejournal obsessives who chained themselves to a Cork Tree back in 2005 would want either. And whilst titling your comeback album Save Rock and Roll' suggests Christ complexes greater than 30 Second To Mars, FOB thankfully side-step the self-help, cosmic rock-messiah posturing of Leto and co by injecting a considerable amount of foot-stomping fun into their fifth full-length.

Scattered across Save Rock and Roll are a selection of eclectic and somewhat bizarre guest spots, which provide both the highs and lows on an otherwise fun, if unremarkable album of glossy (synth)pop-punk. Big Sean throws in a verse on 'The Mighty Fall' that rivals Wiz Khalifa's on Maroon 5's 'Payphone' in terms of superfluousness and on 'Rat A Tat' Courtney Love simply spews forth a couple of indecipherable rants - her appearance here proving she still has considerable purchase amongst the upper echelons of the music industry, but providing absolutely no clue as to why.

Despite opening with a vocal melody suspiciously similar to Adele's 'Rolling In The Deep', 'Just One Yesterday' smartly develops into a gorgeous mid-tempo duet between Stump and British synth-pop starlet Foxes, and the title-track featuring Elton John proves to be the best song on the album. Every trick in the book is employed to turn the song into something grandiose - a piano line, strings, hand claps and a high-pitched vocal sample all feature - but it's Elton's voice that makes it great. The Rocket Man is underused but sounds absolutely superb as he belts out lines such as "Blood brothers in desperation/ An oath of silence for the voice of our generation."

Other notable moments include the back-to-back rousing, anthemic twin-peaks of first single 'My Songs Know What You Did In The Dark' and the virulently infectious 'Alone Together'; both tracks you'll be able to sing along to the chorus upon first listen. Here Stump's vocals sound better than ever and while it would be unfair to lay credit for this with producer Butch Walker, it's probably worth remembering his involvement with post-hardcore band Saosin - a year after co-producing 2009's In Search of Solid Ground, vocalist Cove Reber was kicked out of the band for not being able to 'represent the music [they'd] recorded well on stage.'

Not that there's any possibility of this happening with FOB, but Walker's studio wizardry provides Save Rock and Roll with the Rolls Royce of production values. It's a huge sounding record in all respects, (a bit too) clean, spacious and meticulously layered. But that's fine. The punk has always played second stage to the pop in FOB's world. Save Rock and Roll isn't life or game changing but it's probably the album FOB needed to make - if only for themselves - and as an honest portrait of the roller-coaster ride that is FOB's career, it finds them on a high.