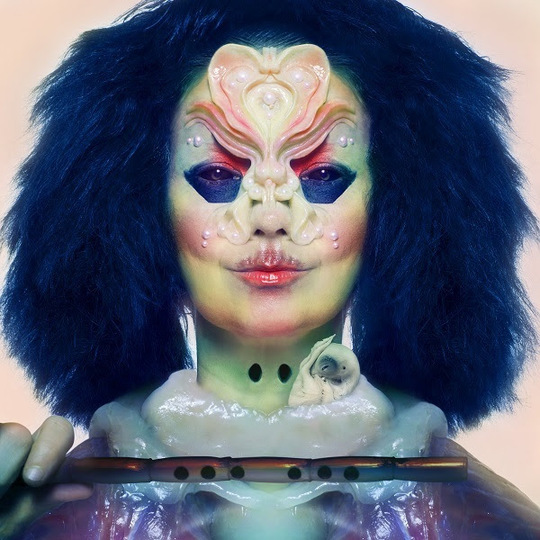 “The essence of utopia seems to be desire - the desire for a different, better way of being.” - Ruth Levitas, The Concept of Utopia

Björk’s music has always been utopian at its core. In the grand scheme of things, her long-term belief in the symbiosis of technological advancement and nature reaches beyond the ecological sustainability of our present; the current political climate begs us to consider on a daily basis the viability of agitprop mantras like her “Don’t let them do that to you!”; even the dismayed warrior character experiencing personal turmoil in Björk’s first truly ‘dark’ record, Homogenic, recuperated the desire to “Free the human race/From suffering” and ultimately observed: “All is full of love/All around you”. That after the emotional devastation of Vulnicura (2015), which documented the end of a relationship and its impact on her family, Björk would write a whole record about the innate desire to inhabit a better place is a testament to this ongoing narrative of ‘reconstruction’ in her work - a culmination of it, if you will - rather than a proper new direction. Who more than Björk has been blurring the lines between the experimental producer, the popstar and the ‘superhero’ for the past 30-plus years, after all?

The way Björk forged her own fully-fledged imaginary space, though, is where the enchantment and the newness reside. ‘The Gate’, the first single off Utopia, came with the most alluring image to introduce the tone of the album: the titular wound of Vulnicura has morphed into a gate where love and care are exchanged. “Split into many parts/Splattered light beams into prisms/That will reunite”, she sings of this new ‘state of being’. Although the arrangement of ‘The Gate’ is minimalistic and ambient-y - her voice almost fluctuating in a vacuum - the image epitomises the overall sense of uncontainable hope and joy of the record: melodies refract and multiply, like in the rapturous ‘Arisen My Senses’; flutes punctuate each song, elevating her vocal delivery and seeking moments of unison with the stomps of the electronic beats; birdsongs (a mix of new field recordings and samples from pre-existing collections) accompany her journey to an island where “There’s a lot of women with children, and everybody’s playing flutes, and everybody’s naked, and there’s all these plants you’ve never seen before and all these birds you’ve never heard before”, as she put in an interview. The 60-piece Hamrahlid Choir, conducted by Þorgerður Ingólfsdóttir, on occasion crowds this metaphoric space, while the twinkling sound of a harp adorns some of the most intimate passages on the record, like the exquisite ‘Blissing Me’. The last two elements in particular (harp and choir) at times bring to mind another love-studded Björk record, Vespertine, although the similarity is no more than a distant echo: on Vespertine the celebration of love, both lyrically and sonically, felt microscopic, epidermic even, whereas on Utopia the music and the senses are programmatically projected outward.

This harmonic state is also intergenerational. Björk’s creative relationship with Alejandro Ghersi aka Arca, begun during the final stages of Vulnicura, has here become a two-way exchange of ideas: 'Concept By Björk and Arca', the credits say. Arca reportedly invited Björk to reconsider sonic directions she hinted at in the past, like the muffled new age beats of her Vespertine b-side ‘Batabid’, echoed here in the serene closure of ‘Future Forever’. Furthermore, over the past few years Arca has been at the forefront of a movement of young artists breathing new air into the experimental electronic music field, with a mixture of omnivore references, grating beats and head-spinning dynamics. Many of these musicians already worked at some remixes of Vulnicura tracks, while Björk expressed her love for their work by including their music in her DJ sets. In a way, the fresh approach of artists like Ghersi and Rabit (here co-producer of ‘Losss’), who were influenced by Björk’s love for potent, harsh beats in their day (think of tracks like ‘5 Years’, ‘Jóga’, ‘Enjoy’, just to name a few), injects elements taken from their own update on club music into the work of their master, coming full-circle. As a consequence, the shattered glass sounds on ‘Arisen My Senses’ and the hip hop-influenced warped vocals/beats on standout ‘Sue Me’, for instance, sound eminently ‘current’. ‘Losss’, being the most abrasive episode on the record, is also one of the most musically daring: whereas in songs like the title-track, for instance, beats are low in the mix, giving woodwind instruments all the necessary space to ‘breathe’ around Björk’s vocals, in ‘Losss’ the synthesis is delightfully uneasy. Unsurprisingly, the song, which Björk described as a sister to ‘Pagan Poetry’, is, together with the orchestral tour de force ‘Tabula Rasa’, one of the few rejoinders with the turbulence of Vulnicura: “This pain we had will always be there”, she sings, “But the sense of full satisfaction too”.

‘Body Memory’ is another moment where positivity, rather than idealised from scratch, is presented as the result of personal struggle. Easily one of Björk’s most ambitious compositions, the song is a ten-minutes long response to ‘Black Lake’. Over the course of six verses, Björk narrates her own ‘manifesto’ of reinvention, describing her relationship with nature, the city, love, sex and her children. The song feels like an adventure, it almost has a video game-like quality (wolf growls overlap with her line “Fought like a wolverine/With my destiny”, in descriptive fashion), that keeps you on you toes, captivated until the final resolution: “My warrior awakens/My turn to defend/Urban didn’t tame me”. The song touches on all of the main themes recurring in Utopia: detoxification and the celebration of nature, of course, but also the takedown of patriarchal structures of government (“Farce like patriarchy”), a trait that spiritually links Utopia with the work of ANOHNI and her Future Feminism movement: “Watch me form new nests/Weave a matriarchal dome/Build a musical scaffolding”, she sings in ‘Future Forever’. ‘Music itself’ (its restoring power, its mediation) is another key theme on the album: in ‘Body Memory’ “sweating” on a “Brooklyn dance floor” resuscitates the connection of the body with nature; in ‘Blissing Me’ exchanging mp3s becomes the most intimate and titillating of prospects for “two music nerds”; in ‘Arisen My Senses’ the weaving of tracks on mixtapes becomes emblematic of erotic fusion; in the windy scenario of ‘Features Creatures’, one of the ghostliest episodes on the record, the singing persona’s love interest is imagined walking in and out of record stores. In addition to the entrancing music on the record, it seems, the songs reflect on music itself as the very fabric of utopia.

Both musically and lyrically, Utopia is extraordinarily gripping and majestically consistent in its intent to shake and uplift. If there is one aspect that runs the risk of breaking the spell it is its duration. The last thing you expect from a narrative of betterment and flourishing is exhaustion, and being the record as painstakingly detailed and vocals-heavy as it is, its cumulative effect can feel pretty overwhelming passed the 60 minutes mark. But it could be that abundance and a certain urge to overshare are what made a wondrous record like this possible to begin with (in an interview Björk said that ‘Body Memory’ was originally 20 minutes long). There’s certainly a whole universe to take inspiration from here while we work towards tangible improvement.