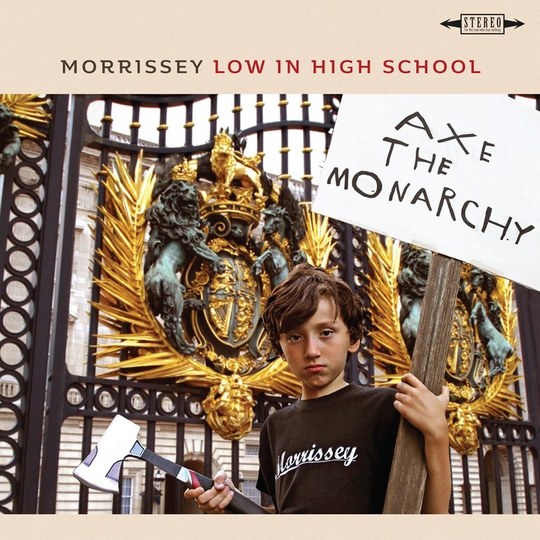 Short of downing a pint of frog’s piss on I’m A Celebrity, releasing an album of country duets with Shane Richie or get caught whipping his cock out a la Louis CK, it’s hard to imagine how Morrissey could sully his reputation any further.

Shoddy solo album follows shoddy solo album as reliably as ignorant quip succeeds drearily ignorant quip. The ex-Smith’s latest indiscretion occurred on the BBC, which has been promoting Low In High School with veritable gusto via plenty of radio play and invitations from Graham Norton and Jools. Performing a lengthy set at Maida Vale for 6Music, with 35 years of showbiz experience under his straining belt, Morrissey’s between-song banter exhibited all the wit and charisma of a seasoned poo. It included a comment about the Ukip leadership election being 'rigged' in favour of a more moderate candidate over the Islamophobic and far-right associate Anne Marie Waters. When that went down like a lead balloon, Morrissey added, 'You didn’t get it, did you? You obviously don’t read the news.' This came approximately ten minutes after he’d just warbled his way through the single ‘Spent the Day in Bed’ on which Morrissey recommends that we all stop watching the news.

This is not the first time Morrissey has flirted with rightwing nationalism and his official merchandise webstore still includes a t-shirt design featuring a black-and-white Union Jack with switchblades in the form of a cross and a font which can only be described as significantly more fascistic than comic sans.

It’s weird how Morrissey has become one of those gummers who pines for the olden days when you could call a spade a spade and everybody spoke English because, as documented in his arrogantly Penguin Classic-ed autobiography, Morrissey (like countless others) had a bloody miserable time back when most toilets were outdoors, life was much bleaker and literally everybody ate meat.

Mind you, you can’t blame Morrissey for harbouring a rose-tinted sentimentality for previous times. We listeners pine for an earlier age too, specifically that era when Morrissey had the ability and necessary collaborators to create music of substance. Remember the good old times when Morrissey spoke for gentle outcasts and well-read oddballs instead of speaking exclusively for the mutant hatechild of Paul Nuttall and Alf Garnett? Remember when Morrissey last did something good?

Sure, bad people often make good art. Like all record collections, yours and mine are brimming with the names of deeply unpleasant power-tripping egomaniacs who have held deeply reprehensible views and committed countless terrible acts. We needn’t worry much about that dilemma in this case because Low In High School is not very good art at all.

On it, the worst English novelist since Katie Price moans about the mainstream media with his tinfoil hat firmly in place, gets distracted several times by the spaces between people’s legs, rhymes “train” with “rain” without feeling ashamed, pronounces the word “news” in a manner that suggests his time residing in Rome, LA and elsewhere has impinged on his own ability to maintain a native accent, spends seven sanctimonious minutes explaining that soldiers are quite heavily involved in the process of war (who knew?), expends another five minutes on the revelation that many armed conflicts are driven by the American thirst for oil (mind blown!), and champions the state of Israel as if Julie Burchill had gelled her hair into a quiff and swapped provocative print journalism for the more candid communicative medium of ranting at strangers from behind a greasy karaoke microphone.

The saddest thing is that all the emotionally flat crooning and awkward lyricism is set to the most blandly serviceable of arena-rock backing tracks complete with by-numbers horn and string parts (the orchestra being the last refuge of the uninspired rockstar), performed by session musicians who’ve honed their craft from stints backing the likes of Alanis Morissette and Billy Corgan. The net result makes The Killers look like Throbbing Gristle.

Just the other day, Morrissey cancelled a concert in California because the stage was 'too cold'. A couple of days later, a third date was added to his London shows next year due to 'phenomenal demand'. Where is this demand coming from? Who are these people eagerly queuing up for those ropey renditions of his older, better songs? How do they tolerate the new material? Are they members of that section of the so-called 52 percent who hope that Anne Marie Waters could be our very own, more successful Marine Le Pen? Are they so militantly vegetarian that they believe it’s big and clever to call the Chinese 'a subspecies' and use a Norwegian massacre to opportunistically highlight how many chickens have been seen off by Colonel Sanders? Are they the most forgiving fanbase on the planet? What if you spend £60+ on a ticket only for Morrissey to storm offstage if he gets a little too chilly? Or when somebody hurls a sausage at him again?

Low In High School is the latest in a long string of wet sausages that Morrissey has cruelly inserted into the ears of his audience. It’s hard to understand why his followers don’t storm off instead, for good.