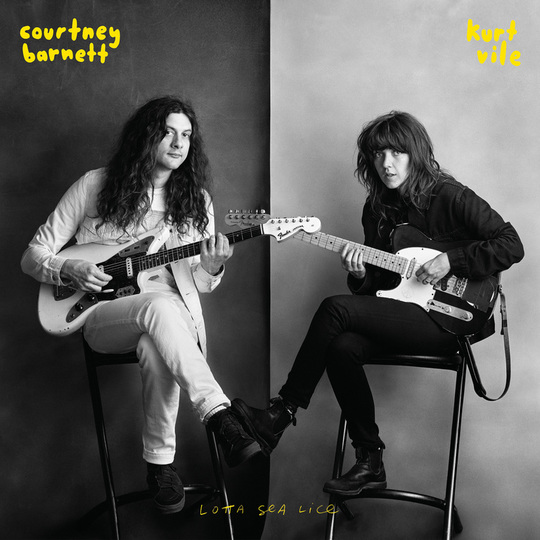 When this reviewer interviewed Courtney Barnett at the absolute peak of her debut full-length’s success, in late 2015, she did not come across by any stretch of the imagination as a woman in a rush. Plenty of her contemporaries would have been anxious to strike while the iron was hot with a follow-up if they’d enjoyed the kind of halcyon year that the Australian did with Sometimes I Sit and Think, and Sometimes I Just Sit, but instead, Barnett seemed happy to tend to her still-fledgling record label back in Melbourne, Milk, and se where the wind took her in terms of songwriting inspiration. As she said more than once in a nondescript dressing room at The Ritz in Manchester, where she’d been idling the pre-show afternoon away with a book and working her way through her rider’s Stella allowance, 'I’m an artist, man, not a machine'.

Kurt Vile, then, seems like an ideal creative bedfellow, given that he has never worn the demeanour of a man unduly troubled by the passage of time. In fact, the languid, carefree pace of his records tends to belie their compositional complexity, in the same way that Barnett’s unhurried drawl is a far cry from the boisterousness that she and her band bring to the stage. Vile, too, put out his last full-length, b’lieve i’m goin down, in 2015, and has also been happy to dip into other projects since, popping up on The Sadies’ Northern Passages earlier this year. He and Barnett have been friends for a long time, ever since they toured together when Barnett was just starting out on the international stage, and she gushed to him about her love for his career highlight to date, 2011’s Smoke Ring for My Halo.

Lotta Sea Lice apparently takes its name from an in-joke, one that has its origins in a story told by Warpaint drummer and Barnett’s compatriot Stella Mozgawa, who drums on the record and has toured with Vile; she’ll hit the road in support of this album, too, alongside an indie all-star cast that also, intriguingly, includes Sleater-Kinney’s Janet Weiss - two drummers? That’s not something that Lotta Sea Lice’s arrangements seem to call for, so time will tell. Despite the fact that the songs were cut on Barnett’s home turf, it’s actually Vile’s instrumental influence that hangs heaviest over them.

As clean and sharp as the production values are here, this is a record that sounds every inch as if it was conceived and constructed in a garage, with the sessions likely starting out with no ultimate goal in mind other than to jam and see what happened. You’d expect a certain melding of the two individuals’ skill sets here and largely, they blend nicely; the folky tone of the electric guitar is rooted in Vile’s work, but Barnett is a virtuoso player herself and on the woozy likes of midpoint standout ‘Outta the Woodwork’, it’s hard to tell who’s playing what - it’s his sound and her sensibility.

On the lyrical front, meanwhile, the pair seem to have rubbed off on each other, and they frequently sing each other’s lines; Vile’s description of how “these days I plug ‘em up”, in reference to his tinnitus-ridden ears, sounds like the sort of casually charming observation you imagine Barnett scrawls on the back of napkins on the road. Vile himself, meanwhile, finds room for plenty of silliness on the irresistibly daft ‘Blue Cheese’. They seldom step on each other’s toes, and for the most part - the occasional clanger aside - their words sit handsomely side by side. Keith Richards always talks about what he calls 'the ancient art of guitar-weaving', the way he and Mick Taylor, and then Ron Wood, would complement each other in their playing. The written-word equivalent of that simpatico functionality is manifest on Lotta Sea Lice.

The atmosphere was also apparently relaxed enough for the duo to tackle a couple of covers, which accompany the album’s seven original tracks. ‘Fear Is Like a Forest’ is a take on a 2009 track by Barnett’s wife, Jen Cloher, who herself released one of the year’s finest full-lengths back in August with a self-titled effort that Barnett played guitar on. It’s at once a bluesier affair than the original and a more expansive one, too, with Vile chipping in with a noodling guitar solo. More telling when it comes to their shared influences is their version of an old Belly song, ‘Untogether’; in closing the record, the original’s blissed-out balladry, flecked as it was with the melancholy of Mazzy Star, becomes a thoroughly lovely back-and-forth that’s countrified by the tasteful inclusion of slide guitar.

Lotta Sea Lice is indeed, as its creators would be at pains to point out, the sound of two good mates having a bloody good time for no other reason than that they could, and that they wanted to. Barnett and Vile are both laid-back enough characters that you can take them at their word when they say that they weren’t really looking for anything more than that out of the project; so often, that kind of ‘it-was-just-supposed-to-be-for-fun’ angle can come off a touch defensive, as if the artists involved know that the audience is looking for more. No danger on that front; Lotta Sea Lice won’t totally slake the thirst of the pair’s individual fanbases for new solo work, but what it does do is see them bring out the best in each other. It’s a powerful testament to the possibilities offered up by a genuine creative friendship.