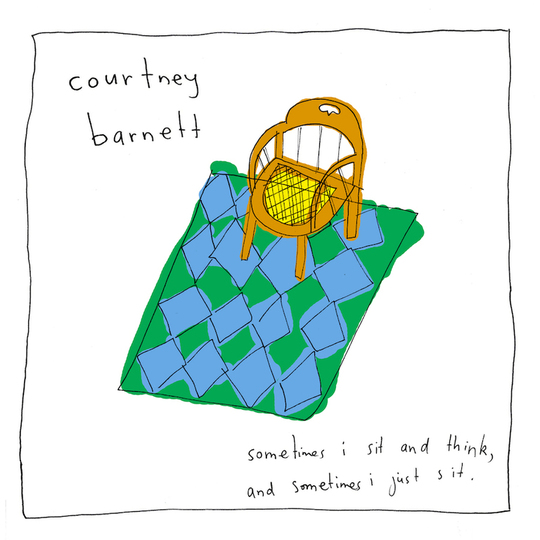 ‘Then I see the handrail in the shower, a collection of those canisters for coffee, tea and flour / And a photo of a young man in a van in Vietnam’

The above lyric is taken from ‘Depreston’, the fifth song on Sometimes I Sit and Think, and Sometimes I Just Sit, Australian singer Courtney Barnett’s debut album proper. A reflective strum detailing a house-hunting trip to Melbourne’s outer suburbs, it hinges on these lines, which showcase Barnett’s gift for storytelling - and her inquisitive, wandering mind - perfectly. What started as a series of vague preoccupations and concerns expressed as Barnett and her partner are shown around the deceased estate becomes a rumination on life, death and the stories that surround us in myriad little details.

It is a perceptive, achingly poignant tune - maybe the best on the album. But spinning poetry out of the ostensibly mundane is pretty much Barnett’s modus operandi - just look at how an ill-guided attempt to make something of the day presages an asthma attack leading to contemplation of mortality and self-doubt on last year’s breakthrough single ‘Avant Gardener’, and how mordantly brilliant, charming and effortless it all sounds. Barnett’s songs are peppered with delightful observations, packed with detail, and delivered in a tone that ranges from playful and sarcastic to weary and burned out.

Happily, they rock, too. This is aptly illustrated via the album’s punchy opening salvo of ‘Elevator Operator’, ‘Pedestrian at Best’ and ‘An Illustration of Loneliness (Sleepless in NY)’, as well as in the singer and her band’s fiery onstage disposition. ‘Small Poppies’ and ‘Kim’s Caravan’ really drive the point home: rumbling seven-minute jams that crescendo in some wonderfully discordant guitar solos, the latter in particular might be the record’s other great achievement. A dead seal on a beach precipitates an exploration of climate change and culpability, resting on the notion that “We all think that we’re nobody / But everybody is somebody else’s somebody” - a simple, encouraging truth in isolation, and one that gains accumulative weight and meaning in the context of the song.

In the album-closing ‘Boxing Day Blues’, a contrite Barnett apologises to her girlfriend, musician Jen Cloher, for being out drinking and impossible to track down following Cloher’s mother’s death on Christmas Day. All wordplay is abandoned in favour of admission of wrongdoing, a simple metaphor and a quiet, moving refrain, yet Barnett is still recognisably the same singer who snarls her way through ‘Nobody Really Cares if You Don't Go to the Party’ or frets over the quality of supermarket vegetables in ‘Dead Fox’.

There are manifold reasons why Barnett’s music is so compelling, then, but it all boils down to the way that she mines the little details for something powerful and resonant, creating songs that are at once universal and deeply personal; universal because they come from such a personal, specific place. The kind of details she hones in on are so easily overlooked, but often the most jarring. Sometimes… begs you stop to sit and think about them for a while.