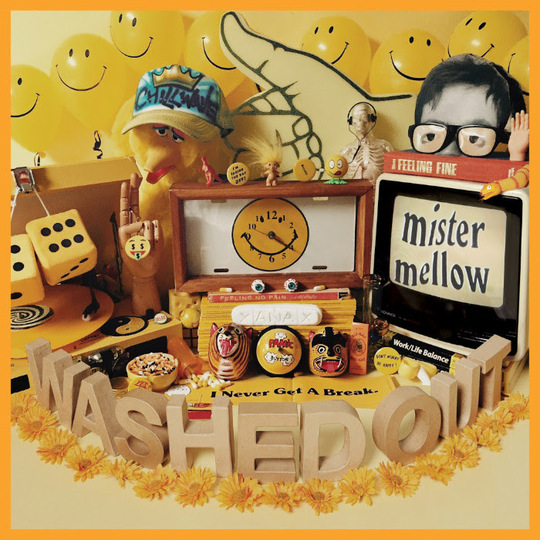 Tired? Stressed? Life getting you down? Washed Out’s new album is arguably just what the doctor prescribed – a sonic equivalent of dropping a Valium. And the title says it all. Mister Mellow, Ernest Greene’s third album, is literally tailor-made to relax and zonk you out whether it’s been a long day at work taking shit from the boss, or waking up to an unbearable hangover after a night on the piss. Either way, whatever your momentary woes may be, trust us, the title delivers what it promises.

And that’s the thing – for an album so minimal and short in length, Mister Mellow is one ambitious effort, packaged as a double whammy of audio and visual components, which gives the impression to the eyes and ears that it’s a much longer affair than the mere 29 minutes it actually is. And that’s because it manages to come across as rich, textured, and grand in sound and imagery at the same time as it does ethereal, abstract and quite simplistic. Perhaps only Greene can pull this off, and if not, he’s one of the better ones who can.

Actually, the best way to experience what Mister Mellow is really about is to give the visual component of the album a go first. Yes, the audio more than stands up on its own, but the artwork courtesy a variety of incredibly talented artists really does a more comprehensive job of fleshing out Greene’s overall vision. But let’s start with the tunes.

Laziness, boredom and complete apathy are the main themes here, and yet, on most of the tracks there is so much going on. A big fat soup of house, free jazz, hip hop and lounge – peppered with occasional handclaps and random voiceover samples Greene picked from YouTube videos – give the album so much depth and texture, it literally demands that you pay attention to keep up. Again, although Mister Mellow clocks in at half an hour, it’s easy to see how Greene spent almost two years assembling this sonic collage.

Blissful chillers like ‘Burn Out Blues’ and the house-inspired ‘Hard To Say Goodbye’ were custom made for poolside barbecues and long coastal Sunday drives, sounding somehow nostalgic yet impersonal at once. The likes of tinny-sounding dancehall number ‘Get Lost’ wouldn’t feel out of place long after midnight on some seedy dancefloor, while the summery ‘I’ve Been Dreaming My Entire Life’ is the complete opposite, bordering almost on the melancholy... Basically, Mister Mellow sounds like a hazy, atmospheric kaleidoscope with Greene’s soft, muted vocals added to the swirl. This is the sound of being high.

And this is how it looks: a brilliant patchwork of trippy handmade animations from artists like Winston Hacking and Harvey Benscoter. Combined, the album and the videos form a fully-immersive project featuring random and bizarre shots of melting clocks, falling pills, cut-out palm trees and warped, psychedelic shapes and patterns. And it’s pure perfection up against the tunes, expressing the drudgery and absurdity of modern everyday life through stop-motion animation, claymation, magazine collage and puppetry, as well as photos of a guy’s blurred out face (‘I’ve Been Dreaming My Entire Life’). It’s kind of creepy too, but it’s mostly clever and cool, adding an impressionistic view of the world which Greene supplies sonically.

If you happen to travel on London’s public transport during peak hours, let this be the soundtrack to your commute and nothing will ever piss you off again. Ever.