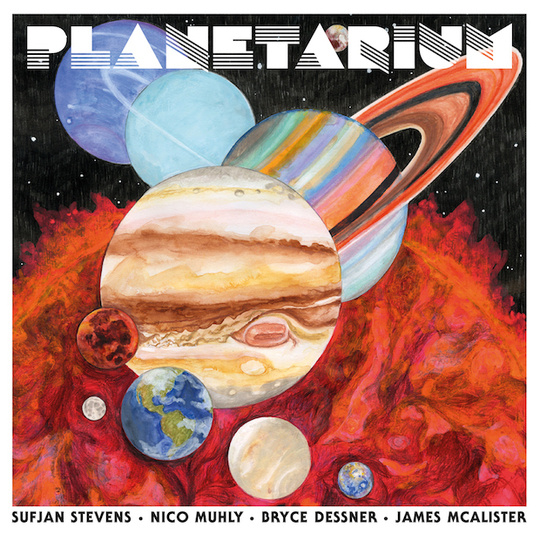 One common pitfall with supergroups is that you’re usually excited about one member or other, but then their bandmates insist on doing stuff too. So the problem with Tin Machine wasn’t David Bowie – the problem was everybody else. The downside of with every band with Jack White in apart from The White Stripes isn’t Jack White – it’s that he keeps inviting his deadbeat chums to sing.

Now, I say this not to be harsh, but to be factual, but for surely at least 75 percent of interested parties, the fact that the album Planetarium is the work of a supergroup that is literally just a credits list of Sufjan Stevens, Bryce Dessner, Nico Muhly, James McAlister will elicit the question ‘well how close is this to a Sufjan Stevens album, then?’.

And the answer, delightfully, is ‘really quite close’.

‘An expansive song cycle that explores the Sun, the Moon, the planets and other celestial bodies of our solar system (and beyond) through soundscape, song, science and myth’ sounds like a fairly classic Sufjan conceit. In fact, he was brought in by composer Muhly, who had been commissioned by Dutch concert hall Muziekgebouw to compose a new work, leading him to turn to his old pals Stevens and Dessner (of the National), with Sufjan bringing in his pal McAlister on electronic beats.

However, Sufjan is undoubtedly the dominant force here, so much so that his name is first credit. In essence, then, Planetarium comes across like a bunch of his songs cut with the contributions of the other three, with Muhly and Dessner manifested via lengthy, graceful instrumental passages, and McAlister's electronics binding the whole thing together. It is not quite in the same league as Sufjan's own, hermetically sealed masterpieces, but coming a mere two years after Carrie & Lowell – there were five-year-gaps between his last three solo records – it confirmed my sense that his ponderous release rate is less to do with how long it takes to write songs, more it taking him aeons to come up with a theme for a record. Having one handed to him by a buddy makes things a lot easier.

Anyway, there is one absolute good-as-anything-he’s-ever-done keeper on the record, a trancy, autotuned ballad called ‘Saturn’ that of course sounds genuinely terrible when described in those terms but is in fact unutterably wonderful. “Tell me I’m evil, tell me I’m not the face of God” howls Sufjan over cresting waves of beats, and suddenly, for one glorious second, you can at least see what sort of thing Coldplay are probably trying to make with their forays into pop. It also whets the appetite for the full-on Sufjan dance record that he’s always vaguely threatening to make.

It’s also one of the more formally committed songs on the record: while it’s Sufjan’s melodicism that ultimately lingers in the memory, most songs are a sort of happy alliance of styles, Dessner and Muhly’s neo-orchestral beds pepped and given shape up by either McAlister’s beats, Sufjan’s bright acoustics, or both.

Despite the song titles and notional subject matter, the vibe is less ‘Also Sprach Zarathustra’-style bombast, more atmospheric psychedelia of the sort one might enjoy in an actual planetarium whilst lying on one’s back and dropping something illegal. It’s a long album that starts relatively ‘songy’ with the acoustic-ish ‘Neptune’ and chunky, Age of Adz-style pop of ‘Jupiter’ and reaches its apogee* with the 17-minute widescreen double whammy of ‘In the Beginning’ and ‘Earth’, a long, stately, solemn passage that slowly shimmers into focus like sunrise in the desert, eventually acquiring beats and an autotuned Sufjan who leads it all into an ‘Impossible Soul’-style hoedown with his repeat final line “run, mission, run, before we arrive”. (Sufjan’s lyrics, by-the-by, frequently use the notion of ancient gods and the cosmos to explore some of his own tortured faith, though ‘Saturn’ aside there’s no lyrical tour de force).

Planetarium only occasionally feels absolutely essential, but it never dips below ‘pretty good’. In essence – and again, sorry to be reductive to his collaborators – it’s like a less focussed bonus Sufjan record that’s popped up in addition (hopefully) to the ponderous orbit of his own schedule. It’s not essential in the way Illinois is essential, but fans would be mugging themselves to not at least give it a whirl.

*I am aware a language pedant might take issue with the use of this word for a song called 'Earth', but whatever